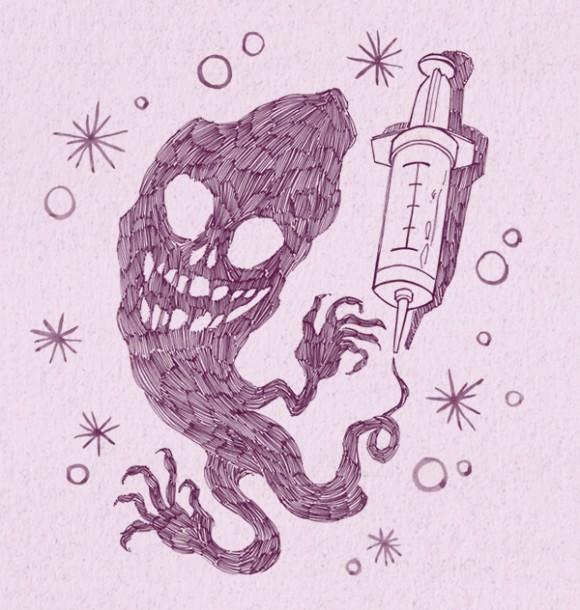 Illustrations throughout by Allegra.

Sophat glanced at Brooke from across the kitchen. He wanted to be alone with her, but it didn’t seem possible—when there are only five people at a gathering, it’s kind of obvious when two of them sneak away together.

Then her eyes met his, and she gave him a sly smile. She reached down into the pocket of her cardigan and pulled out the corner of a packet of papers. The handwriting samples. Sophat grinned. He felt weirdly proud. Brooke didn’t like games—Sophat knew that about her. But she was going along with this “How to Kill K” thing, and she seemed to actually be enjoying it. She was actually smiling at him. She was noticing him, which was an exponential improvement over every other day in the past year, when she didn’t even seem aware of his existence.

The smile lasted only a second, then Brooke’s face resumed its usual coldness. She was known around school as a total ice queen. She was so focused on her schoolwork that she seemed to have no need for friends, or boys, or fun. But this only made her more attractive to Sophat. In fact, this was among his favorite things about her. Everyone else he knew was only interested in parties; Brooke had goals: She was going to be the first female president-slash-bioengineer in history. Sophat didn’t really have any goals himself, beyond getting Brooke to fall in love with him. And he’d made more progress on that in the last five minutes than he had in an entire year.

Sophat looked up to see Brooke in the kitchen talking with Karl, the German exchange student. They were leaning over the counter together, trying to load the gas cartridges—sleek metal bullets full of nitrous oxide—into the whipper. It felt like they were taking a VERY LONG TIME, and Karl kept leaning excessively close to her and OH GOD DID THEIR FOREHEADS JUST TOUCH? It wasn’t fair. Guys like Karl could just swoop in from Germany with their blue eyes and excessive leaning and steal everyone’s crushes. Drop dead, Karl, he thought. Or at least go back to freaking Germany.

But as soon as he thought it, Sophat felt stupid. There was no need to be jealous or nasty. He didn’t own Brooke and had no right to feel territorial. And anyway, Brooke required constant intellectual stimulation and wouldn’t have the patience to go out with a guy with such a limited English vocabulary. Stay cool, he told himself. That was kind of Sophat’s thing, being cool.

“Hey, guys,” Sophat heard himself practically yell. “What’s the next step?” Ugh, what was he doing? He tried to play it off by nodding toward Brooke and Karl’s little tabletop project.

Brooke responded without so much as glancing up: “Almost ready…” Sophat loved this version of Brooke’s voice—barely audible, spoken between gritted teeth. The voice of complete concentration.

Then there was a crash.

“Oh gosh, oops,” Parker was saying, bending to sweep up a broken glass that had shattered on the tiled floor. It was the third thing he’d broken in the last 10 minutes.

“Be careful!” Keely snapped at him. “My parents will notice if they come home and every single glass is broken!”

“Parker, hello, stop turning up the heat!” Brooke said, slapping Parker’s hand away from the stove top. “What is wrong with you? Did you drop your brain along with everything else you’ve dropped in the last hour?”

“Sorry,” Parker hissed, turning the knob back to low.

“And stop messing with the injector,” Brooke added. “The directions say not to clean out the siphon.”

“Parker, maybe you should go chill,” Sophat said, hoping he would get the hint and get out of the way so he could get closer to Brooke. He could get a closer look at those cooking directions, too. Something seemed weird about them. Everyone else was just forging ahead with this supposed mystery game. Sophat felt like he was the only one who wondered what exactly they were doing.

To read on, enter the first name of this month’s Grown Person in the box below, and click the Show Me! button. (Don’t just hit Enter!)