Give Peace a Chance

Put your body on the gears and protest. 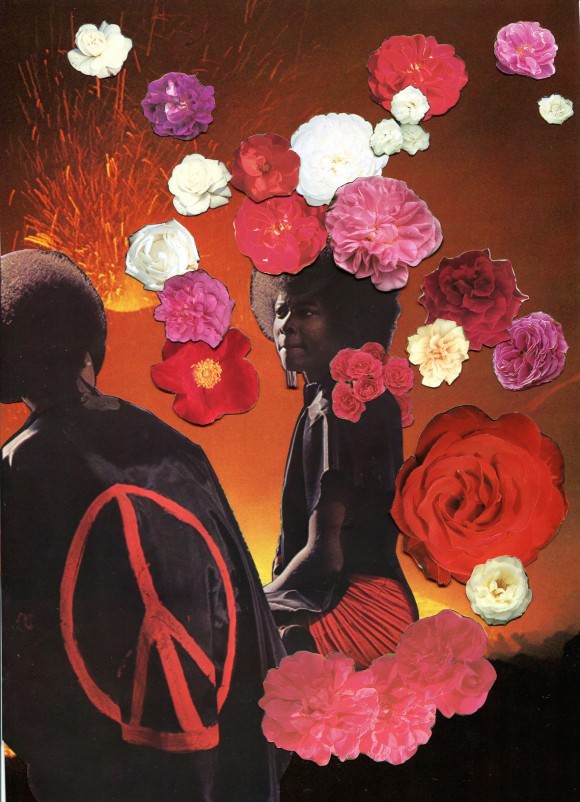 The 2004 March for Women’s Lives was one of the best days of my life. I had spent months of organizing online and traveling around the country to help mobilize young activists fighting for reproductive justice. I got to the banner that led the march and, when I looked behind me, I saw thousands of like-minded people united together for a cause, and was so profoundly affected that I have kept in touch with many of the young women who marched on the frontline today. Even though I spent lots of exhausted, sleepless months preparing for that march, the memories that remain are triumphant. They remind me of the moment I realized that my voice was powerful. 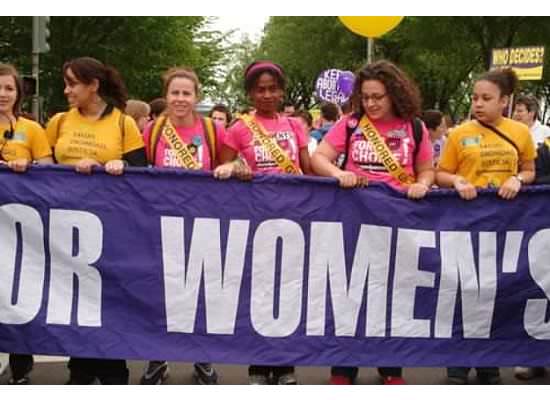 Carrying the banner for Planned Parenthood at the March for Women’s Lives in 2004.

I’ve always been inspired by peaceful and nonviolent resistance, which means fighting for justice without using violence. I think I’m drawn to this form of protest because the vibes are so posi—it’s about people coming together as a community united behind a cause. Nonviolent resistance is not just about physical protests like the marches I participated in—it can include vigils, protest music and art, leaflet distribution, sit-ins, boycotts, online storytelling, letter-writing campaigns, petitions, consciousness-raising groups, and strikes. The fact that it takes so many forms just makes it better.

My parents came of age in the 1960s, and they taught me about the political movements of that era. It was a really important time in their lives, when I was a kid their stories led me to idealize that decade for the explosion of youth-driven counterculture moments and larger social movements it spawned, like Yoko Ono and John Lennon’s Bed-Ins, where they famously invited the media to their bedroom and voiced their opposition to the Vietnam War, and the Montgomery Bus Boycott that followed Rosa Parks’s refusal to relinquish her bus seat to a white man in the racially segregated South. My dad liked to joke that I was born at the wrong time because I obsessively watched documentaries like Woodstock and Eyes on the Prize when I was a tween, and ran around the house with a daisy garland on my head singing Jimi Hendrix’s “If 6 Was Nine” and John Lennon’s “Imagine.” My folks teased me about being an “old soul,” but I saw the pride in their eyes when they recognized my appreciation for their generation’s social justice.

I was awe-struck by my mother’s stories about her involvement with Student Nonviolent Coordinating Committee, teach-ins she took part in, and the lessons she in civil disobedience she learned from legendary people like Cleveland Sellers and James Clyburn. I never tired of hearing her recollections about freedom rides and marches in Alabama, Mississippi, and South Carolina. Like a broken record, I asked her repeatedly to tell me about what she felt and thought while she sat-in at segregated lunch counters, or registered voters in spite of social pressure to maintain Jim Crow laws. Her courage and resilience inspired me to stand up against injustices I saw around me in my own life. 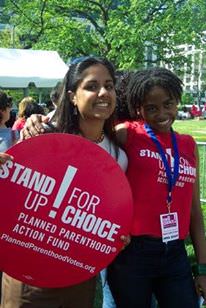 Mobilizing for Reproductive Justice at Planned Parenthood’s Stand Up for
Choice! event in 2004

My nickname in middle school was Rebel With a Cause, and I lived up to it. I participated in my first anti-racist protest at the age of 10—it was about employment discrimination. In grade school I set up recycling campaigns at school and distributed petitions to fight apartheid. In high school I was co-president of the Black Student Union and ran my school’s Amnesty International chapter.

I went to college in Washington, D.C., and since I was in the nation’s capital, I was in a prime location for grassroots lobbying, protests, and rallies. I often joined classmates and friends from nearby universities in walkouts and marches in the aftermath of the 1999 World Trade Organization protests in Seattle, and I was always up for a pro-choice, anti-war, anti-racism, or economic justice protest. D.C. was always buzzing with protests, especially in the wake of 9/11. My friends and I didn’t have money or political influence, but grassroots activism let us feel the power of our voices (and our votes). 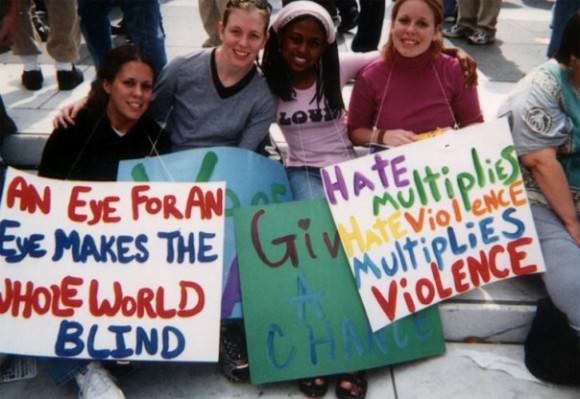 That’s why it kills me when I hear politicians grip about the millennial generation’s supposed apathy—evidence shows that young people are actually far from complacent, and there are countless examples that prove it. In fact, I feel like we’re in the middle of an activist renaissance, where groups of impassioned people are inciting movements on the streets, at the polls, and online. This year alone, we’ve seen young people and their allies harness the power of peaceful assembly, from Texas’s 700-person citizen’s filibuster, inspired by State Senator Wendy Davis’s 11-hour filibuster protesting legislative attacks on reproductive rights, to the groundswell of marches like A Million Hoodies. I’ve seen firsthand how hard young people are working to lead, build, and support social movements.

I’ve taken part in all kinds of protests, and I personally see nonviolent resistance as the best way to fight inequality. I tend to advocate for tactics that represent values that liberate rather than harm or destroy. It’s basically about peaceful resistance—we’re not using violence to get what we want or encouraging violence in any way; we’re using our voices and bodies to say, “Hey, we do not agree with this, and we demand change!”

The best thing about peaceful protest is that everyone can do it! You can participate in boycotts, lobby elected officials, create protest art, make murals, hold candlelight vigils or sit-ins, go on strike, and picket businesses or events. Peaceful protests usually create a spectacle, whether it’s thousands of people marching in the street or five people holding a sit-in at a governor’s office—and the enthusiasm behind them can be contagious, which is part of the point—it encourages other people to join the movement. Here are a few tips that can help get you ready to take to the streets.

Know your stuff.
Read up on the organizers, their platform, and their partner organizations, because it’s important to feel comfortable and confident about the cause you’re advocating and the manner in which this particular organization is addressing it. It also helps to know the key messages you want to promote in case a reporter asks to interview you or a passerby wants more information about why they should support your campaign.

Know your rights.
Many public spaces (including government buildings and churches) require permits for mass assembly, have trespassing policies, or have strident rules about safety and noise, it is crucial to understand the basics about what you’re getting into before you dive in. I treat protests like any adventure I’m embarking on—it is always better to be safe than sorry. For your personal protection, take some time to study federal and state civil liberties laws so you know how to find help if you need it. The American Civil Liberties Union (ACLU) has treasure trove of FREE online resources—and don’t forget to download their priceless wallet card!—that detail how to deal with police, immigration agents, or the FBI. If you’re under 18, make sure you talk with a trusted adult before you go. Let them know your plans and tell them how they can support you on this adventure. If you’re joining an action where arrest is possible (and/or the goal), make sure you have gone through all of the implications with your parents (or a trusted guardian) to ensure that you’ll have access to bail money and transportation home if you need them. If your protest is taking place in a government complex, find out what you’re allowed to take into the building before you go—totally innocent-seeming things like backpacks and tampons have been prohibited, and you don’t want something minor like that to block your opportunity to stand up.

Be prepared.
This may seem obvious, but preparation can make the difference between a fantastic experience and a crowded/uncomfortable nightmare. Map out the location of your protest and research several transportation options in case your event causes traffic (or the police put up blockades). Not to sound like your mom, but don’t forget to bring sunscreen, sunglasses, essential medication, warm clothes and hand warmers if it’s cold out, a high-protein portable snack (a bag of nuts is good), emergency contact information, a big bottle of water, your ID, your cell phone, and a camera (to document your experience and/or keep law enforcement accountable) if your phone doesn’t have one.

Bring a buddy.
It can be intimidating and overwhelming to attend a protest on your own. Maximize your fun and take safety seriously by bringing a buddy. If you bring a friend (or five—the more the merrier!), you can keep an eye on one another, snap pictures and videos of each other, exchange emergency contact information, sing freedom songs and chants together (if that’s your thing!), and share fabulous memories about creating change together when you get old like me!

Practice what you preach.
There’s nothing wrong with having fun at a protest (they can be really fun!), but be mindful of how you are representing yourself and people who share your beliefs. Standing in solidarity in an activist community is powerful, and it is up to each community member to contribute towards keeping a protest as safe and inclusive as possible. In the spirit of peace, honor all beings and the earth by eliminating and minimizing litter at your organizing site, and if you’re confronted by the police or the media, be respectful.

Brush that dirt off your shoulders.
In my experience, haters are always gonna hate, and there’s usually someone who attempts to hijack your protest with their opposing message. NEVER respond to them with physical violence. Doing so will only undermine your goal and dilute the impact of your message. Keep your eyes on the prize and celebrate the fact that you share their right to assemble. Honor their right of free speech and keep it moving. Just like it is never a good idea to feed the trolls in online comment sections, the same rule applies for protest hecklers. I’ve dealt with a wide spectrum of IRL trolls, from the eerily polite ones who want to convert me to their religion, to the downright rabid racist, misogynist, ageist, xenophobic, joyless ones. Stay close to your buddies, and if someone starts harassing, bullying, or threatening you, take a photo of them, report them with Hollaback’s anti-street-harassment app, and let a law enforcement official know immediately.

Make connections.
You’re probably gonna be surrounded by likeminded souls, and it’s easy to break the ice with them. I often compliment people on their signs, slogans, or shirts, or ask what inspired them to take action about this particular issue. Even if you’re not looking to make lifelong friends, it is both fun and helpful to introduce yourself to other activists in order to share ideas, theories, strategy, logistics, and safety information. You may even forge lifelong connections.

We’re constantly told about the power of money, big corporations, corruption, and violence, but it’s important to remember that PEOPLE are powerful too. Peaceful protests have shown me that humans have a great capacity to care about one another, and I think they’re largely responsible for forming my political values, which are basically: righteousness, collective organizing, and love. ♦