How to get over long-lasting embarrassment. 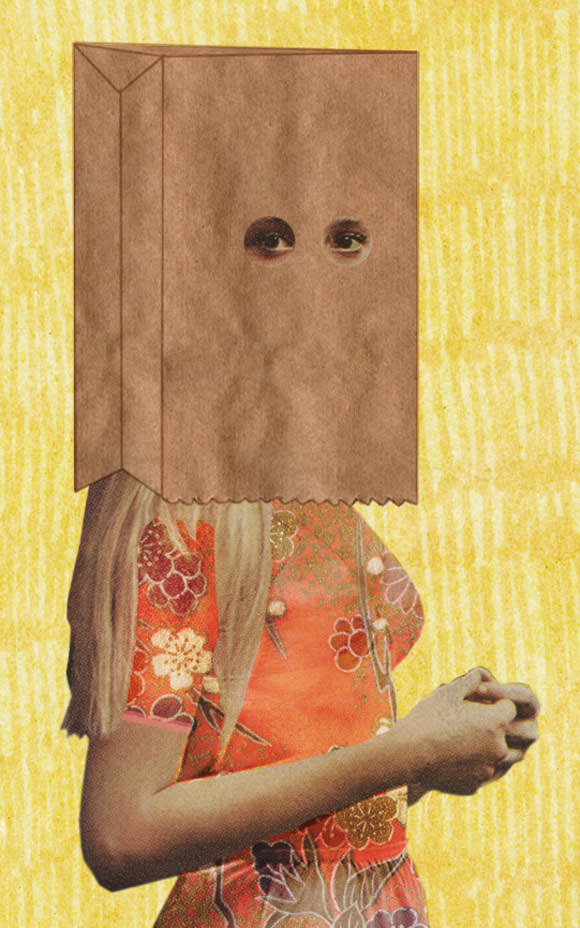 Imagine you just got your period for the first time, and now your mom is announcing it via e-card to your entire extended family. And to the person you have a crush on but have only spoken to twice. Also, don’t look now, but you totally left the house without putting on pants, and there’s spinach in your teeth. Oh, almost forgot to mention: This is all being broadcast on LIVE TELEVISION.

Do you feel that? Do you feel the pure agony of being the most embarrassed person on the planet? That is exactly how I feel for days, weeks, sometimes even years after making a stupid mistake. I have been cursed with this superpower that gives me the ability to recall humiliating moments in extreme detail. I basically let my past humiliations live rent free on my brain’s couch, and the longer I dwell on each horrifying incident, the closer the cool, responsible roommate—aka my self-confidence—gets to moving out. It’s not uncommon for me to have a great time at a party or something, then call someone by the wrong name—and my evening is completely ruined. That one misstep will play over and over in my head, like the blooper reel of my life.

I file my embarrassing moments away by grade, month, and year. For example, I’ve forgotten most of the details of fifth grade, but I remember the farting-while-mapmaking incident like it was yesterday. I was working on a geography group project with two boys and joked, “Where do pencils come from?” (PENNSYLVANIA!). I laughed hysterically at myself; I laughed so hard that I farted. Loudly. I looked away and pretended it didn’t happen, but one of the boys said to me in a serious, quizzical tone, “Did you just fart?” I denied it, but then he said, “Yes you did.” The laughter stopped there, at the point of my deepest fart shame. If you think this is a trivial incident, you’re right—it is. But that farting incident has haunted me for YEARS. I’m a sophomore in college, and I still cannot work on group projects without being reminded of that disaster, and reliving the wave of shame I felt for weeks after. In retrospect, laughing so hard at my own joke that I fart loudly sounds amazing—talk about comedic timing! My classmates probably forgot about the whole thing by the time recess rolled around, but here I am, 19 years old, still thinking about it regularly.

There are probably hundreds of instances in which I have called friends “Mom” instead of their names. Then there was the time, in fifth or sixth grade, when I slept over my friend’s house, left my toothbrush in her bathroom, walked in on her brother peeing, DID NOT IMMEDIATELY REALIZE HE WAS PEEING, and proceeded to look for my toothbrush until I finally realized what was happening a few seconds later. In ninth grade, I was cast in my first (and ONLY) school musical, and there was one scene where I was supposed to act opposite a boy I had never spoken to before. During the first rehearsal, the teacher told me to fall into his arms and ordered everyone else to stop and watch us. I dutifully did what I was told—then I froze. I just stood there awkwardly in this stranger’s arms, not knowing when to break out of the position. When I realized that the teacher wasn’t coming to my rescue any time soon, I just started to move my arms sloooowly away from the guy until we were finally separated. These are some of the terrible, embarrassing moments that I will never let myself forget.

It’s only human to be embarrassed sometimes, but I am pretty sure that there are several factors that have led me (and others who dwell super hard on humiliation like I do) to keep focusing on things well past their expiration date. I think the main reason is that even though I’m an introvert, I really like making friends, and I’m always afraid that I’ll embarrass myself so hugely in the process of getting to know someone that it will stop them from wanting to get to know me back. A lot of my social awkwardness stems from anxiety about my ability to read people. I have no idea if anyone likes me enough that I can finally relax around them, so I constantly beat myself up over tiny misjudgments and mistakes, or any time my behavior betrays the cool customer I am trying to be at any given moment.

It’s annoying when people say, “But everyone makes mistakes!” We are all special snowflakes who want to think our blunders are more intense than everyone else’s, but deep down I know it’s true: Everyone does make mistakes. We all occasionally say, “You too!” when a waitress tells us to enjoy our meal, and then feel like total jerks afterwards. Instead of ruminating over the better thing I could’ve said, or just not saying anything at all out of fear, I’m figuring out how to care less as time goes on. And it’s working, little by little. I recommend this technique: As soon as something embarrassing goes down, remind yourself that this one moment will not define your existence. Tell yourself this until it turns into your gut reaction! Thankfully, most of us aren’t celebrities on live television, so the time you slipped and fell while getting off the bus will not be turned into a viral GIF. No one will tip off a gossip blog to rat you out as a self-absorbed jerk if you call someone the wrong name by accident. If your humiliating moment involved being dickish to another person, just apologize and move on! Let’s say you’ve accidentally hit someone in the boob during an intense round of gym-class dodgeball. Only a monster would not accept a warm “I am so sorry!” If you get into a stressful interaction with someone and can’t think of anything clever to say…until RIGHT AFTER the conversation is over, when you come up with the best, funniest, most cutting comeback of all time, do not beat yourself up. Instead, file that bon mot away in your mental folder called “Witticisms for the Next Time I Make a Fool of Myself.” After any cringe-inducing moment, acknowledge that something embarrassing just happened, and then give yourself permission to stop caring about it. Say it out loud if you have to! But don’t carry it around for longer than the duration of the actual embarrassing episode.

In junior high, one of my teachers hung up a poster with an H.G. Wells quote on it: “If you fell down yesterday, stand up today.” I used to read it and be all, “Ugh, shut up, poster, I am very comfortable here lying on the metaphorical ground!” But as cheesy as it is to admit it, that poster was so right. Let your embarrassing moments be fuel for your productive fire. Write about your most shameful moments until they become funny. Share them with your friends the next time they make fools of themselves. I used to be intensely mortified by that fart incident, but as I started to type it out here, I realized that it was actually kind of wonderful. So you did a stupid thing last week, last month, or maybe even last decade? So did everyone else. We are all in this together. Say it with me now: Everybody farts. ♦