An exclusive album premiere and a conversation about quitting art, moving to a new state, and living life on your own terms. 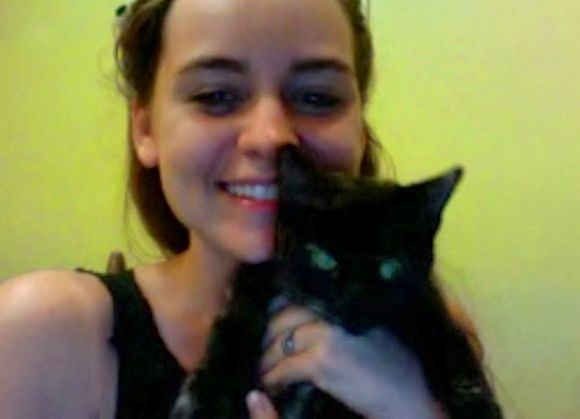 The first time I heard Cross Record’s debut album, Be Good, I blasted out a bunch of all-caps tweets admonishing the world for not knowing and recognizing Emily Cross’s undeniable genius. Cross Record is her new solo album—it’s girly, night-timey, creepy, and just right for powerful solitudinal listening. Somewhere around my 120th listen, I found out that Emily had recently been my down-the-street neighbor here in Chicago, but had just moved to the Texas countryside with her new husband. The good news is that the couple has built a new recording studio, so there will be another Cross Record album out soon.

Emily’s story of becoming a musician is inspiring: While still an undergrad at the School of the Art Institute of Chicago, she started making music in an intuitive, autodidactic fashion. After a misbegotten record-making experience, her latest is getting an international release on October 15 with BaDaBing Records—also home of Rookie faves Xenia Rubinos and Sharon Van Etten—and we are proud to premiere the whole thing here on Rookie right now!

I called Emily for a video chat to talk about the new album. I also got to meet her new kitten, who was purring super loud on her lap.

JESSICA: Let’s talk about your big move. Why did you leave Chicago and move to Texas?

EMILY CROSS: We moved to a little town outside of Austin called Dripping Springs, which is a really unfortunate name for a town. It’s basically filled with people who like to shoot things, hippie ladies who have dried-herbal companies, and musicians, so it’s really cool to me. My major impetus was to have land and live in the middle of nowhere, but still be near a city, because we needed to make noise without bothering any neighbors—we can be really loud in the middle of nowhere. Dan, my husband, is trying to make it an artists’ retreat. We’re renting this awesome place with 18 acres. My personal life goal is to build my own house—this is my first foray into homesteading. We just got chickens, and I want to keep bees and grow vegetables.

What were you doing in Chicago?

I was working three jobs. I went to art school there, and just stayed.

What sort of art were you making, and how did you start making music?

I went to school for drawing and painting, and I didn’t make music until the last year of college, when I traveled to Ireland to study. I was making a shitload of art there, but then I started making music and my art went like this [gestures a steep downward decline] and my music making went like this [makes the opposite motion]. I had a little freakout, but then I realized you can’t really put intense focus onto two things at one time. By the time I started making music full time, I was at peace with it.

Do you feel like you have a finite amount of creative energy, or was music just a better creative outlet for you?

I think it just had to do with how much time I did or didn’t have in the day. I have always had a full-time job, then cooking, eating, and sleeping took up time, and then I started making music. Drawing and painting took so much energy, and there just wasn’t room for everything.

Let’s talk about your record, Be Good. How did you make it?

I moved to Michigan for two months to live with my good friend Theo, who was the engineer. His parents were renting a house there, and he decided to move all of his equipment there, so for two months I lived there with him and his parents. [Laughs] Being in such an enclosed situation in the middle of nowhere for two months was really fucking intense—I was sort of trapped. Working with another person changes everything—there were a bunch of technical problems, and at one point Theo hit his head on a glass globe light fixture and got such a bad concussion he couldn’t hear for 10 days. It was such a mess! [Laughs]

Did the turmoil you experienced while making it change how you felt about Be Good when you were done? Were you like, Ugh, this record! when it came back from being mastered?

I was relieved! I did a Kickstarter campaign to help pay for it, and I promised to send out an original drawing with each order, so I was making, organizing, and sending tons of orders—it was so stressful, but it didn’t taint the album when it was done. I was so happy about it and amazed it was finished! I don’t have a lot of musical experience, but I think music can be intuitive—you don’t have to have a lot of talent to make good music if your ideas are interesting and you believe in what you are doing.

How does it feel to have gone from recording on a lark to recording for a big label?

It sort of feels like a miracle. I never really had a vision of what it was going to be, and I didn’t have a goal beyond having people hear it. I never thought anyone would like it. Everyone says that, but I really mean it! I feel really lucky. ♦