Your Body, Your Self

“Intimidating” Is Not a Compliment 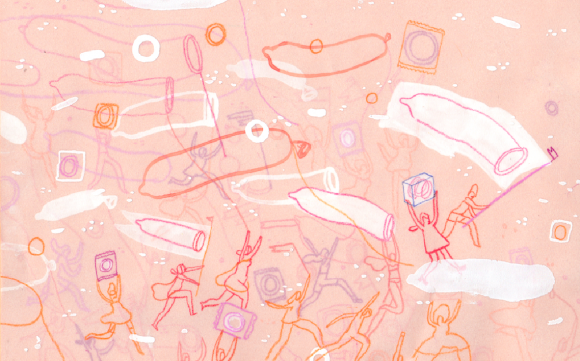 It makes me cringe to admit this, but I still have to psych myself up when buying condoms, because it’s so much easier to expect the dude to bring them. I was raised in a home where sex education was not discussed, but we have a lot of advertising and media encouraging the use of condoms here in South Africa (I guess my parents figured that would be enough). But girls everywhere still have a tough time when it comes to taking control of our sexual health, and buying condoms in South Africa always comes with a lot of hassle from sales clerks who don’t think we should be having sex at all.

I have heard way too many horror stories from other girls about botched attempts at condom-buying because the cashier made them feel dirty for being sexually active. In most stores here, condoms are kept behind the cashier on a wall, and you have to ask for them at the counter. Most of the cashiers are adults, and there is also a heavy emphasis on respecting one’s elders in South African cultures, so imagine the anxiety and resentment at play when a young person (the customer) commands an elder (the cashier) to give them condoms! The basic judgment is that you just made an elder an accomplice to the sex life you shouldn’t have in the first place. If you are ever going to walk out of there with condoms, you have to pump yourself up and get ready for a showdown before you even walk through the door. I’m going to look the sales person in the eyes and ask for condoms. If she tries to shame me I will throw a big fit and get her fired. Let’s do this!

This is a progressive society, but many people still frown on young women having sexual autonomy—I recently heard a caller on a radio show say that girls who carry their own condoms are clearly “too ready” to have sex. It’s no wonder so many people have been discouraged when trying to buy condoms at the shops! Advertisements might try to destigmatize the use of contraception, but the message is taking a long time to sink in. It’s unfortunate, because you can’t deal with problems like STIs, unwanted pregnancy, or sexual ignorance if you pretend they don’t exist. And for a lot of young people, the difficulty of buying condoms becomes another excuse to not use condoms.

As I have slowly found the courage to declare that I am a feminist without my voice shaking, I have also grabbed hold of my rights with both hands. I have the right to protect myself from the risk of HIV/AIDS, STIs, and pregnancy—simple as that. It is important to take a stand, and that is why I joined Zazi. Zazi is an Nguni word which means “know yourself,” and also the name of a social awareness campaign that I am a proud ambassador of. The Zazi campaign, led by the Johns Hopkins Health and Education South Africa organization, was created to educate and empower South Africans, with a focus on women’s sexual health and overall wellbeing. We encourage young women to have safe and healthy sex, whether they are sexually active right now or just thinking about it, because the best way to protect yourself is to take responsibility for your own sexual health. That means buying condoms, getting tested regularly, and making sure you’re in healthy, safe relationships. Since we live in a patriarchal world, girls often get the message that boys and men are a bigger priority than they are, but Zazi aims to remind young women that they are equally valuable, and that it’s OK to look after ourselves and put our needs first. I was lucky enough to get the message to protect myself before Zazi was established, but it’s good to keep the awareness going, with the hope that it will reach a new person each day.

We made a music video to highlight some of the problems the campaign hopes to address: We aim to combat the rise of transaction-based sexual relationships (a problem here in South Africa, where young women are told they should sleep with older men for money or clothes), validate young women who have been vilified for seeking contraception, and remind people that lots of girls are in abusive relationships and need a way out. In the video, Zonke sings her beautiful tune, and I recite one of my poems:

The green ribbon symbolizes new beginnings, new hope, rebirth, and regeneration. These are real situations that a lot of girls and women face every day, and I love that we show these girls in positions of unity and power, like the girl firmly rejecting the advances of the older man and playing sports with her friends or the older woman who smiles at the young woman getting contraceptives from a nurse. We want this video to encourage viewers to make empowered choices!

Part of the reason I was so happy to join the Zazi campaign was that I needed to stop feeling powerless about my own sexual health. I have been touring university campuses with DJ Zinhle, one of the few women successfully working in the male-dominated music industry—we usually do our thing during lunchtime breaks in amphitheaters or public areas on campus, and I connect with the campus radio DJ to host a show while we’re there. We tell students what Zazi is all about, and peer educators for that campus introduce themselves to the crowd and explain all of the contraceptive options available on that campus. Then DJ Zinhle closes out the session with a one-hour long set. We make learning about sexual health a PARTY, and meeting with so many young women who take this message to heart inspires me to keep taking control of my sexual health.

I really love visiting college campuses. It’s important for Zazi to reach girls when they might just be starting to explore their sexuality, and we travel to places that are sometimes forgotten or marginalized. I recently travelled to Venda in the Limpopo province, and Alice in the Eastern Cape province to connect with students who aren’t as privileged as the students from other universities. The fact that the work is being done in some of the places that need it most makes it even more worthwhile. It makes me feel good because I feel like I am an active part of the change that I want to see in the world instead of complaining and stewing in frustration. The students participate and support us, and generally have a really good time! I hope they leave feeling informed and empowered, and continue the Zazi message long after we’ve left. And we’re also sure to let the students know that they can get condoms for free at local and university clinics to avoid the possible trauma of buying them at the store!

Every time a young woman fearlessly buys condoms or refuses to have sex without one, that is a personal victory worth celebrating, because it takes an immense amount of bravery to put all of your love into yourself like that. Working on this campaign reminds me that feminism yields important work. I thought my poetry was limited to the stage, but it’s opened doors for me to be one of the key figures in a cause I deeply respect and, as a young woman, so deeply need. I am part of an amazing team, and feel empowered by the work I do. The best outcome would be to somehow inspire every girl to know her worth—to know that she is inherently strong, and does not need permission from anyone to make sexually healthy choices. ♦