A Bikini Kill–channeling version of Icona Pop’s “I Love It.” 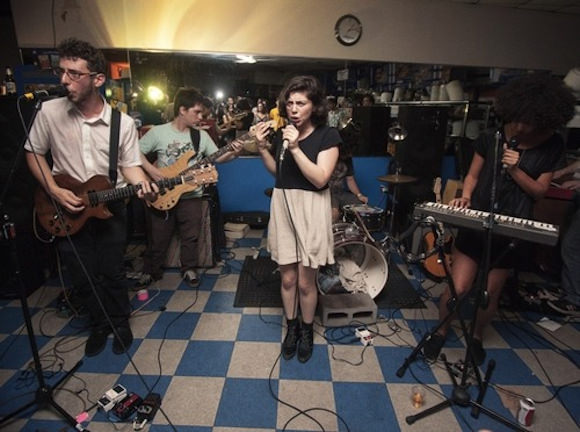 Ava Luna is a coed quintet from Brooklyn and, for the last few years, one of my favorite bands. They have seemingly synthesized all of the best sounds, genres, and quirks from the last 40 years of pop music and whirred them together into this tough, slinky, odd-funking, R&B shimmy-art-punk band. They are very DIY—they record and release all their own albums and book their own tours. Naturally, we had to ask them to do a Rookie theme song, and being all about max fun, they took Icona Pop’s club hit “I Love It” and destroyed then reassembled it for our enjoyment.

I talked to Becca Kauffman, one of Ava Luna’s two frontwomen, via Skype this past weekend while she was babysitting.

BECCA KAUFFMAN: Yes. Scope out this beautiful apartment I am in. [Spins computer around to display her surroundings.] In that corner there is an extensive collection of Nars makeup.

Have you just been giving yourself a makeover since the kids went to bed?

I imagine that our readers, some of whom are probably babysitting as they read this, are imagining that one day they will be in a successful band and will no longer have to babysit. You are really bursting the bubble here.

That’s what I was thinking! I am a professional odd jobber.

What has been your oddest job?

I had a freelance house-cleaning business. It works with my tour schedule. It’s a job I could do and then be gone for four weeks and no one cared.

Is it weird to be in people’s houses when they are not there?

Is this what you anticipated being a band would be like?

I had no idea what it was going to be like. I just thought, Sure, I could be in a band!

Had you ever been in a band before?

I was in a high school band called Hide Your Daughters. It was a queer Riot Grrrl band. I did try to start a band in second grade for my group the Whatchamacallits, and I posted an audition sign-up sheet atschool. I even got my principal to announce it over the loudspeaker.

You really had some clout, roping in the principle like that.

I dressed up in what I thought was a cool outfit and I kind of got myself together before walking into his office. I was like, “Hey, Mr. Walker, I’ve got something to talk to you about.” [Laughs] He humored me, but none of the kids were into it.

How did you go from that to joining Ava Luna?

I moved to Nw York right out of school to become an old-timey jazz singer; I did that for about a year, trying to make my way. Then I went to a show at Death by Audio and Ava Luna played and I really, really liked them and my friend told me they were looking for another singer. I wound up talking to Carlos [Hernandez] and he came over and taught me a few songs, then I went and practiced with everyone, and that was the start of everything.

Did you study music in school?

I made up my own major at UMass Amherst called “gender and performance study”—it was a combination of jazz vocals, theater, and gender studies. I did a performance-art solo show at the end. I grew up on a lot of old musicals—Gypsy and jazzy musicals—and my voice lends itself to it naturally to that style of singing.

Do you utilize that style of singing in Ava Luna?

I have completely launched away from that. The more time goes by, I consider myself less a singer, and more a vocal artist. I like hearing different stylings and figuring out how to use them in the band. For example, with this Icona Pop cover we did, since it’s for Rookie, I want to make it gritty and badass, so I am doing my best Bratmobile/Bikini Kill impression.

What’s more important when you are onstage—feeling powerful or feeling vulnerable?

That’s almost an impossible question. The ideal is a balance between the two. It’s a really tall order in life and onstage. Just being onstage makes you vulnerable, but how much you show that varies depending on your comfort level. You might try to cover it up by exerting more power. During songs I feel transported, and that’s a moment of power. But between songs I feel pretty self-conscious, because when I am onstage but not singing, it’s like, Where does my persona go? Over time as you spend more time onstage, you develop more of a persona. It doesn’t have to be something that’s separate from who you really are—it’s the version of you that you choose to show on the stage. Over time you perfect that, and it becomes a perfect alchemy of power and vulnerability.

Before Ava Luna I had never been in a real band before, and all the other people in the band knew about gear and equipment—like how to wrap a cord! Then I’d be onstage doing something I feel really capable of doing until the show ended and I’d still be onstage, but now I have to wrap up a cord in front of all these people who saw me just do something really powerful, and I’d feel really vulnerable because I am not sure I know how to wrap up this cord. For a while it was like, Oh god, I have to expose my ignorance now. It was weird to have to go through that learning process in public. But in general what vulnerability means to me is admitting you don’t know how to do something, or that you are new to something. There is a power in saying, “I don’t know how to do this thing and I am here to learn.” I had such a hard time throughout my life admitting I didn’t know how to do things, and then I’d never learn them because I couldn’t admit I didn’t know. It’s really important to just be open about that. You are less likely to make a fool of yourself if you are. ♦