Getting through life one disaster at a time. 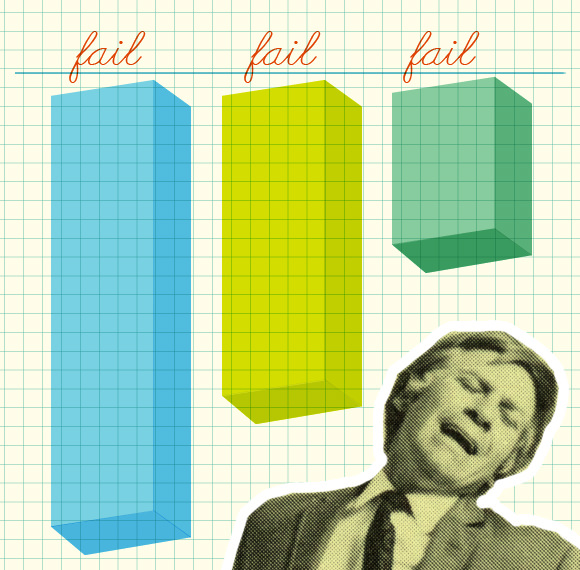 Humans totally fail from time to time. And I don’t mean fail to win their soccer game or fail to remember their mom’s birthday—I’m talking about tripping on the sidewalk in front of someone you like, awkward flirting attempts that involve trying to bat your eyelashes but you just end up looking scary, or putting something in the microwave for 20 minutes instead of 20 seconds and almost setting house on fire—those epic fails that make you cringe to even remember them.

I have had many such failures in my life, so I’m really good at them. Failing is an art, and you can turn a failure into a victory if you see it in the right light. Let’s take a look at some commonly tragic fails you might experience, and talk about how to see them as wins, because life is hard enough.

Sustaining a Really Stupid Injury
Fail: Injuries are just infinitely stupid and probably the ultimate fail, because everyone can just look at you and clearly see that you FAILED at climbing out of a tree, skateboarding, or dancing. One time in gym I got spiked in the face with a volleyball while I was zoning out; it didn’t hurt too much, but I pretended I was in major pain to get out of class. And I did get out of class, but my acting was so good I got sent to the actual doctor’s office. WTF? That’s like a fail turned into a win turned into a bigger fail.
Win: Are injuries really failures, or just the ultimate badass battle scars? Nobody wants to get hurt and end up with a cast or major surgery, but a stupid injury can only add to your street cred. Actually, maybe you do want a cast—everyone can sign it and you’ll be mega popular.

Uh Oh Naked
Fail: I don’t know your life, but you’ll probably never be suddenly, unpredictably naked in public. It’s more realistic that you’ll have a nip slip, or your skirt will get stuck in your underwear after a trip to the bathroom, or you’ll climb onstage during a show by your favorite musician of all time and moon the entire audience. Being accidentally naked in public is almost always a fail. I have not only nip-slipped on many occasions, but have also played body shield to lots of friends experiencing sudden wardrobe malfunctions (like when your BFF’s boobs fall out in the middle of a wave pool at a Disney theme park). Even if everyone does want to see you naked (because you’re super hot, duh), you still want to control where and how that happens. Anything else is a fail.
Win: Skirt stuck in underwear? One boob out? Sounds like a new fashion statement to me, so just own it. Seriously—the key to making this fail a win is to just act confident and pretend that whatever you just did was intentional. Yeah, you totally meant for your boobs to fall out, of course. #fashion

Tripping in Public
Fail: We’ve all been there: You’re walking down the street in your clogs/sandals/platform Converse, and you trip. In front of everyone, and the Holy Ghost. Even if it’s just for the tiniest little second, tripping is not a good look.
Win: You’re just learning to spread your wings and fly, physically and metaphorically. OK, this one is a stretch—there really is no graceful way to recover from tripping. Like, what do you even do? Oh, yeah, I meant to almost sprain my ankle? But don’t beat yourself up—everybody does it, so you shouldn’t feel weird about it. Look around, smile, and keep strutting your stuff.

Getting Your Period Everywhere
Fail: If your period hasn’t surprised you at least once, here’s a gold star, for you are a person who has their shit together: ★ You’ve probably been surprised by your period at least once—the first time you got it, most likely, and possibly many times after. I got my period a week after my bat mitzvah while I was watching Spider-Man 3 in a movie theater, and the fact that Spider-Man is forever associated with my monthly cycle is a fail. Basically, riding the crimson wave without the proper materials (tampon, pad, wrench) to tidy everything up is a faux pas all around.
Win: So you got blood all over your chair in class, or on your couch when you took a nap, or just literally anywhere because you’re a modern woman who goes places. Think of your bloodied happening as a work of impromptu feminist performance art—make sure to document everything in extreme detail, archive your tampons, and contact local galleries. BAM! Instant art star!

Talking to Your Crush and Messing It Up Because of Course You Did
Fail: Talking to people you like is hard unless you’re infinitely charming and have never, ever been insecure, which is a LIE. Who has never been insecure, or at least a little shy? Beyoncé? Fair enough—I bet Beyoncé has never felt weird talking to a crush. If you are not Beyoncé but instead a mere mortal, though, you have surely tried to flirt with someone but ended up talking about your favorite vegetable or, worse, been unable to speak at all because you were so nervous. You have failed at romance…forever!
Win: You did not fail at romance—you just weeded out the people who suck. If someone is into you, you can probably say a number of lame things and they’d still like you. If you try to talk to your crush and they end up making fun of you, yeah, it’s a blunder, but it’s also a red flag that they’re a douche.

Life
Fail: This just in: Life is one big fail. You’re going to pick your nose and vom into someone’s lap and perform the Elaine Benes dance and do everything else that makes people realize that you’re a human being. You come equipped with embarrassing functions, but that’s totally natural, because nobody is perfect. We all slam into things and get nosebleeds and fart in front of one another. Even the coolest people have epic fails on the weekly.
Win: No matter how gross or idiotic you act, you’re still a unique and perfect li’l snowflake, farts and all. ♦