A new track and stellar advice about shaking things up from Susanne Oberbeck of No Bra. 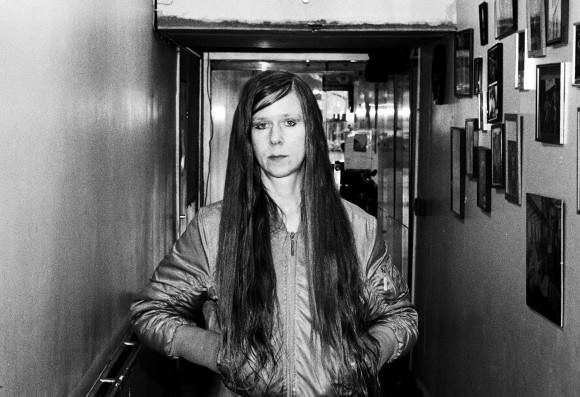 No Bra is musician Susanne Oberbeck’s no-fi, minimal, acerbic electronic project. Her music makes you feel like something invigorating has seeped into your veins. Stripped to the tits figuratively and literally—she performs topless, draping her witchily long hair over her shoulders—No Bra launches cool attacks on what’s considered acceptable when it comes to being a lady. She’s a strange, fascinating force that is gender-neutral in some ways, aggressively feminine in others, and consistently impossible to classify. Take a listen to No Bra’s latest song, “Don’t Rip My Ozzy Shirt,” out tomorrow on her self-released album, Candy, and see for yourself:

I recently had a great conversation with Susanne about gender roles, inspiration, and what it’s like to be unexpectedly aggressive.

LIZ ARMSTRONG: You seem hesitant to place yourself in any genre, either as a person and or as a musician. Do you think labels are limiting? Do you feel like you’re too weird to fit in anywhere?

SUSANNE OBERBECK: I think there’s a particularly American obsession with identity and labels. Everybody is different, and I think that needs to be acknowledged. Of course it’s useful and probably human nature to have shared experiences, but that doesn’t necessarily relate to one’s gender or sexual identity or what kind of band one plays in. A lot of bad things happen because people are trying to or being forced to fit in somewhere.

But people seem to need to categorize things—they want to know how to make sense of you. Do you think Candy is going to help them out?

The songs on Candy are mostly based on real experiences—relationships, things that happened in my life. One is based on a dream, another is inspired by a kind of cliché in gay male culture about rough-trade sex that I adapted to being about a straight female. But it’s really hard for me to look at it through the eyes of other people and analyze it, because I’m just being myself!

What kind of music do you like listening to?

I like music that makes me feel something, or experience something new—music that takes me to another place, is memorable in some way, makes me think or rethink something, gives me ideas, or inspires me. I like to watch performers who have a lot of energy, who have something to say, and whose performance feels like it is based on something real. I like the Raincoats, Courtney Love, the Doors, the Stooges, and the Rolling Stones—people with personality who seem to give everything they have onstage.

Are you making a statement by performing topless?

As far as I know I am just being myself, but maybe people’s expectations turn it into a statement. I like the fact that I can be honest and creative and I don’t have to hide or be polite onstage. It’s a performance that I hope is quite aggressive in an unexpected, maybe more subtle and humorous, way.

Does that relate to how you feel about gender roles?

I can’t subscribe to the expectations that women are basically supposed to please people, look nice, look sexy, not do anything offensive. I am all for reassessing expectations about gender and sexuality! Ultimately, I think a lot of ideas people have about women need rethinking. So it’s good to be in your face about that.

I don’t enjoy being a contrarian, but I like to tell it like it is! Considering the number of people who are happy to keep their mouths shut, there have to be some people who shake things up a little. Confrontation might be a better word—contrarian is something my dad would say! [Laughs]

Do you ever wish you didn’t name your band No Bra so people would stop commenting on your topless act?

Yes! The two are actually not related at all, which is a bit hard to understand. I think it’s good that it’s ambiguous. It also makes me laugh seeing the words No Bra on official papers, like for U.S. immigration. It’s just so ludicrous. I still really like the name, though. ♦

A hoarder of three dogs and tons of crystals, writer Liz Armstrong believes in Nature’s Miracle—both the magical events of life as we know it and the product that gets animal pee out of blankets. Follow her words through her site or on Twitter.