Literally the Best Thing Ever: The Sims

What it reveals about you might not be pretty. 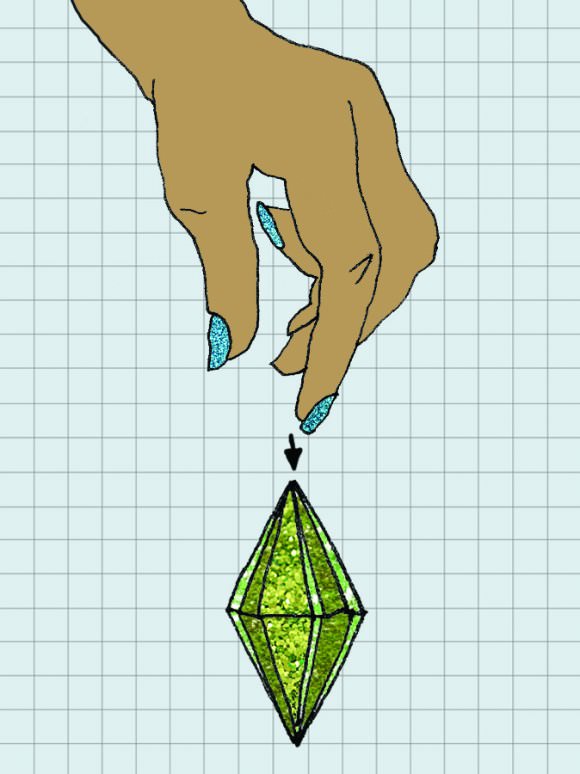 The first time I encountered The Sims was at my friend Monika’s* house when I was 10 and I overhead her mother complaining to mine that Monika’s older sister was spending six or seven hours in front of the computer playing this new game, and that she wouldn’t even get up to eat. This is a state I would soon come to recognize in myself, but at the time, I just wondered how a person could go that long without food.

Because my parents didn’t let me play video games, my previous experience with virtual reality had been very limited: There was a girl down the street I was friends with strictly for her Nintendo 64 (and her awesome snack cabinet) and an ancient version of Oregon Trail that my classmates and I played at school. So when Monika and I went into the study to beg her sister for a turn, The Sims was like nothing I’d ever seen before. The lot, or game board, that her sister had made was a modest brick house for two parents and a little Sim girl, who had her own attic room with sky-patterned wallpaper and a grassy green carpet. Monika’s sister wouldn’t let us play with her (if she wasn’t stopping for food, she certainly wasn’t about to do it for us), but the game looked so cool that I hounded my mother until she broke down and bought me a copy of my own.

I quickly came to love customizing little family houses, picking wallpaper and furniture, and living out the scenarios I’d painstakingly created for my Sim characters. Because of the nearly infinite possible worlds you can build, The Sims seems hyper-complicated, but the main idea of the game is actually very simple: You create these virtual people called Sims, then you design and control the direction of their lives, for better and/or for worse. What I adored most about the game was that it was a contained, tiny universe that I was in complete control of—and what else can you say that about when you’re a child? In The Sims, no one had to spend their weekends learning Polish and then going to Sunday school, like maybe some people did in reality.

At age 10, I was already a control freak, and most of the games I made up for myself had to do with the creation of new little worlds. Like, I would walk around my garden telling myself stories, repeating parts of them to myself until I felt like I had gotten them perfect, exactly the way I wanted them to sound in my head. So it’s probably not a surprise that I approached the lives I created in The Sims the same way, although the game didn’t let me be as perfect as I wanted to be: There are no levels to advance through, and, most frustrating of all to me, no finite way to win. The game only ended when my 1999 iMac crashed.

My mom thinks it’s embarrassing for me to admit that I still love The Sims at 22, but I would like to point out that I have seen Sims blogs written by people of all different ages—not only kids and teenagers but also bona fide adults, some with real-life children of their own. It’s not just the young folks that enjoy a little virtual role-playing every now and then! Just ask Liz Lemon, self-professed Sims devotee:

In my own real life, I’m always discovering friends with a secret love for The Sims, too. My roommate in college, for example, once confessed to me that she loved downloading Jane Austen–era costumes for her Sims and then staging re-creations of Pride and Prejudice with them, which also speaks to the fact that for every person who plays The Sims, there’s an entirely different way of going about it. Although the game’s possibilities are basically endless, in my vast experiences with The Sims, I’ve been able to narrow down three general types of players:

1. The Destroyer
A player who spends most of the game ruining their Sims’ lives, either by creatively killing them or by putting them in strange and cruel situations. One of my friends plays Survivor with her Sims by dropping them onto a lot with just a refrigerator and a toilet and letting them fight it out. Usually, twisted experiments like this quickly lead to chaos. Your Sims pee everywhere, frantically waving their arms in the air in futile pleas for your help, until they die. It’s the quickest way to lose the game, since your Sims have no access to food (or anything else, for that matter)—but that’s kind of the point for Destroyers. Personally, I find this mode of play a little boring, but for some people, it’s a way to take out real-life aggression without actually hurting anyone real. “When I was bullied in elementary school, I used to make fake Sims for the people who had been my friends and just fuck with their lives,” admits my friend Ryane.

2. The Creator
Players for whom the joy of the game lies in the stuff. They build crazy-beautiful houses, get creative with the interior design, and add the most eclectic furniture. Then, instead of actually moving Sims into them, they prefer to share their masterworks online. Creators may also specialize in building whole themed towns or custom objects, like haute couture Sims clothing, or historically accurate furniture for those of us who prefer to play period Sims, like my old roommate and, on occasion, me: I definitely had a Little House on the Prairie Sims phase (I won’t tell you when). There are also the extremely dedicated Creators who taking their Sims-ing to the next level by using the game as a medium for re-creating music videos. These efforts can result in masterpieces like this nine-and-a-half-minute re-enactment of Lady Gaga’s “Telephone.”

3. The Lifer
A Lifer tends to his or her Sims with gentle care as the characters grow up, get jobs, have kids, and grow old, then the Lifer plays the next generation of the family. Whether you’re like my friend Sarah, who’s interested in creating stable suburban-family arrangements (her vast Sims neighborhood comes complete with a granola family that practices yoga), or you’re more into making lasting romances happen, a Lifer sticks with their Sims through their whole life span (usually around 90 days).

I’m a Lifer through and through. I never drowned my Sims in the pool or starved them by deleting the doors to their kitchen. My world was populated by good computerized citizens, all dedicated to achieving whatever goals I’d programmed them to want. I would write out elaborate bios for them, draw floor plans for their perfect homes by hand, and assign them daily schedules to keep them on track for success, whether that meant a life of crime (which is a real career track in The Sims) or a big house filled with Sim children. My favorite thing was to make big, well-organized families and happy little farms. And I hated it when the game sent spontaneous disasters like fires, accidents, or eternally leaking sinks my way—basically anytime it was clear that I couldn’t control everything.

Sometimes striving for perfection in The Sims meant I slipped a little in keeping up with my actual responsibilities, but I mostly kept my priorities in order. But as I got older, those real-life obligations increased, which is probably why I don’t boot up the game nowadays except for during vacation or the summer. Being an IRL control freak takes up too much time to devote much of my perfectionist energy to The Sims.

I find that I do the same things in actual adulthood as I have always done when playing The Sims. The kind of obsessive behavior I used to work out in the game manifests itself in endless list-making where I constantly write and rewrite the tasks I have to complete. When I played, I didn’t use cheats (mostly, anyway). Instead, I got satisfaction when my Sims achieved what I wanted them to the old-fashioned way. But this didn’t mean I was patient about watching my efforts paying off—sometimes I played the whole game on 3x speed to get to the next achievement, zooming the game’s clock ahead to the job promotion or other big life event I’d worked so hard for my Sims to accomplish. And now, as an adult, my head is always five steps ahead of where I am in my life, so that I can’t relax and enjoy the things I’ve achieved. I just graduated from college, and instead of enjoying my new freedom, I’m constantly making lists of potential new professional opportunities to put on my résumé! I’m always waiting for the next big moment to hit, hitting refresh over and over, trying to live life itself on 3x speed.

I know, of course, that there’s no definitive way to win life, or to be totally perfect all the time. And even though it sometimes makes me anxious, keeping that in mind is a comfort. It helps me recognize that real pleasure doesn’t come from impatiently waiting for my next major personal milestone to roll around, but from the process of living. So the next time I sit down with The Sims, I’ll try to take my time and remember what was fun about it when I was 10, when I could barely figure out how to make my Sims go pee, and I loved it anyways. Instead of rushing them toward their next achievement, I’ll take my Sim kids to the park, sit back, and try to enjoy the virtual breeze. ♦

* Yes, we’re both Monika with a K. I haven’t invented some elaborate alter ego to create other fictional people with, though that would be impressively demented.