Why I quit doing poetry slams. 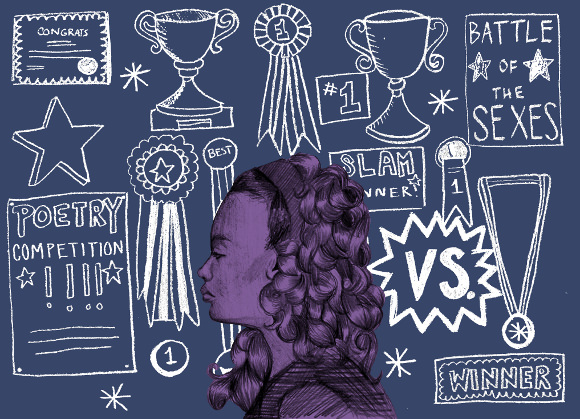 I spent a week working on my poem “To Do List for Africa,” and as I set off on foot for the competition, I kept reciting it over and over in my head. My nerves were so raw that I was sure I would to mess it up onstage, but my need to prove to myself—and everyone else—that I could do this kept my fear in check.

As I approached the club I noticed a small crowd had gathered outside, and I suddenly felt nauseatingly out of place. Everyone else had afros, dreadlocks, or cornrows and dressed “like poets,” and in comparison the getup I had picked out to try to look pretty—black leggings, a long spaghetti-strapped black-and-white striped top, and a dramatic curly weave—seemed incredibly uncool. As I wrote my name on the sign-up sheet near the door, a woman sitting nearby looked me up and down and said, “Are you sure you aren’t lost?”

I took a deep breath and walked into the packed club, my stomach in knots, and found a table in the middle of the room, where I sat alone with my bag in my lap, trying to become invisible. The host, Afurakan, took the stage and welcomed us all to Word N Sound, which he explained was a poetry competition. Then he told us that a guy named Masai had won the last three bouts and was therefore the reigning and undefeated King of the Mic.

Word N Sound is the biggest monthly poetry slam in Johannesburg, South Africa, where I live. Poetry slams are live competitions where poets perform their work onstage and are judged on their writing and their ability to captivate an audience. I heard about Word N Sound from my mentor at the time, a poet and writer who took me to my first poetry reading. I decided to enter the August 2011 slam when I heard that no woman had won it to date. I went to the club that night to make my mentor and all woman poets proud. (Also, I had a huge crush on Afurakan, and I kinda wanted him to know that I didn’t suck, too.)

When the show started, I tried to stay calm and listen to the other competitors’ poems. A couple of them went up and performed and they were good, and the audience clapped. Then Afurakan said something about “a newcomer to the stage” and I heard him say my name. I remember getting up and putting my bag on my chair and whispering to the woman next to me to please look after it. I started to weave through the crowd to get to the stage. I felt lightheaded, but I felt pretty, and even though I knew it wasn’t this crowd’s idea of pretty, it still helped with my confidence. I took my pile of papers with me, but I set them down onstage when it hit me that this wasn’t the kind of stage where people read from notes—it had to come from the gut, and it was now or never.

I don’t remember too much of my performance—just that it felt good to hear my own voice coming from the speakers. I performed “To Do List for Africa,” my bleeding-heart dedication to this continent that I live and love on.

When I was done, the audience stood up and cheered—the first and only standing ovation I had ever gotten in my life! My heart was racing; it felt amazing. I had proved to myself that I do not suck, and I had performed my poetry for complete strangers who could react honestly to my work. Their reaction reminded me of the way I’ve felt when I’ve read poetry that I love—it’s a kind of magic.

The first time I performed poetry onstage was in primary school, at a school recital where we read work by famous writers. I remember being thrilled to learn that this was a job—adults could make a living writing poems for children to recite at school events?! I later learned that other kinds of poets perform their own work in front of large crowds, and that some of them set their poems to music and even collaborate with musicians. I listened to and read the works of amazing South African poets such as Lebo Mashile, who made me realize that poetry exists to give people something to feel. All at once I was caught up in this awesome wave of learning and endless cravings to know everything and everyone there was to know in this world of poetry.

It was through Mashile that I learned about spoken-word poetry, which led me to discover Napo Masheane, Flo, Saul Williams, Staceyann Chin, and, yes, Afurakan. I started going to spoken-word events, where I got a chance to sit in an audience of people who “got it” and be enthralled by the stories, voices, politics, and passions of these artists. I never thought I’d get up there on my own, though. I didn’t want to compete.

Growing up, I hated sports because I always lost, and I didn’t like losing. I didn’t want to compete if I didn’t stand a good chance of winning. I realize that this means that I may actually be very competitive—so competitive I cannot stand to lose—but I also don’t see the point of struggling to win at something that’s not a strength of mine. When it gets down to it, I have to admit that winning makes me feel really good, and not being counted as one of the best in something gets me down. I just don’t like feeling inadequate.

Masai performed next, and he was so passionate on that mic that I immediately understood why he was the reigning champ. There were 18 more competitors, then five judges (established poets themselves) deliberated, and Afurakan got onstage to announce the top five winners. He started from number five and worked his way up. Every name that left his mouth and was not mine led to an anxious tug-of-war in my heart between “Yay, I must be ranked higher than this!” and “Oh no, I must not have even placed!” After reading the third-place winner’s name, Afurakan paused and looked up from his paper. “There’s been an upset!” he announced. As it started to dawn on everyone what that must mean, he yelled, “Give it up for our first ever Queen of the Mic: NOVAAAAAAA!” The room erupted and I went onstage to have my photograph taken with the rest of the winners.

I had “dethroned” the King of the Mic, Masai, who got second place. I would maintain my title for a month, then I was expected to come back and defend it at the next slam. The title was far better than the other cool prizes I won, which included a T-shirt, a bag, and some key rings. The title also came with attention, a newspaper interview in City Press, and victory for a girl who had never really won anything in her life. I had finally found something I was good at—that I could WIN at—and that I enjoyed so much it hardly felt like work.