This Is My Thing: An Interview With Kathleen Hanna

On music, politics, working under an alias, and why cabaret is the most punk-rock thing out there right now. 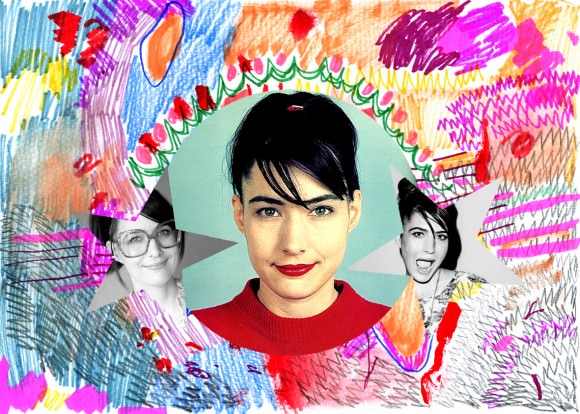 Kathleen Hanna formed the Julie Ruin three years ago in New York with Kathi Wilcox, Kenny Mellman, Sara Landeau, and Carmine Covelli. The band’s first album, Run Fast, came out this month. If you’ve streamed some of the songs already, or if you saw the awesome surprise set last month at Rookiefest in L.A., you know that the album is full of joyful, rambunctious music. There are moments—like during “Lookout” and “Kids in NY”—when it’s reminiscent of Le Tigre or Bikini Kill, Kathleen’s previous bands, both outspokenly feminist projects, but Run Fast is not a nostalgic or overtly political record. Among other things, Kathleen sings about love, hanging out, and letting your adult self say goodbye to your younger self.

It’s the first music Kathleen has released since 2004—around the time she started feeling the horrible effects of Lyme disease. She was strictly private about her illness until Sini Anderson’s documentary about her, The Punk Singer, premiered earlier this year. (Starting November 29, the movie will be in select theaters and on-demand.) Around the same time, the Feminist Press published The Riot Grrrl Collection, which features some of the zines, fliers, and other work Kathleen made as a punk-rock feminist musician, writer, and artist in the early ’90s.

She has been feeling better and working like crazy on the Julie Ruin’s record release and tour, and she recently invited Rookie over to her apartment in Manhattan.

LENA: Hi! Thanks for having us over—that was really nice of you.

With the new Julie Ruin record, the Bikini Kill reissues, and The Riot Grrrl Collection recently coming out, there’s a lot of attention back on Riot Grrrl. You were a big part of that feminist punk movement in the ’90s, so obviously a lot of people want to talk to you about it. But I was reading on your blog that it just gets old for you—

—because it’s been 20 years and you are more interested in talking about new art and new activism. And I was wondering, in terms of feminism, are there ways that people are merging art and politics that are exciting to you right now?

Yeah. I mean, Pussy Riot goes without saying. The first time I saw one of their videos I was really interested. I liked the music, I liked the energy, I liked the costumes. I didn’t know they were going to get fucking arrested and all this shit was going to happen, but they’re really exciting. And the worldwide anger and disgust at the way they’ve been treated because they’re feminist art-makers—that’s been an amazing thing for people to see in the U.S., to realize how many freedoms we have. I mean, think about the Guerrilla Girls in the ’80s. They were a group that wore gorilla masks to hide their identities, largely because they worked in the art world and they were bringing up sexism and racism in that world with stickers and posters. They were nervous about losing their careers if people knew who they were. Then you look at Pussy Riot, and they’re worried about losing their lives—like going into prison forever, not being able to see their children. It’s an intense wakeup call for me, and I hope people in the United States are like, Wow, we could get away with so much more, and we’re not. We’re blowing this chance.

But I also see young girls like Grimes, who is so amazing. She’s producing her own work and it sounds really great and it’s really interesting to watch. And Savages. I don’t know how “feminist” they call themselves or whatever, but feminism isn’t something that you are, it’s something that you do. I don’t give a shit what you call yourself. Like: Betsy Ross. Betsy Ross is a fine thing to call yourself. Whatever. If you’re doing feminist work in the world, then it’s exciting.

Compared with when you first started playing in bands, do you think it’s getting easier to be in a feminist band in the U.S.?

There were people at Bikini Kill shows in the ’90s who would be violent or really mean towards you and the band, but a lot of that type of thing seems to come out now on the internet—for people like Grimes, who gets rape threats on her Tumblr.

When we were playing in the ’90s and men would come to our shows and yell, “Take it off!” or call us the C-word or the B-word—or, most commonly, they would just say, “Shut up!”—in a way, they were doing us a big favor. At the time, of course, I wanted to punch them in the face and drag them out of club—and sometimes I did. But sexism exists in every room we’re ever going to walk into. Racism exists in every room. Homophobia exists in every single room. When people bring it to the fore, it’s like popping a blackhead. All of a sudden, everybody knows: There’s sexism in the punk scene—we can’t ignore this issue anymore. Because before, it was totally being held down. People were like, “Sexism doesn’t matter, man! It’s the ’90s!” It’s the same thing that happens today, where people are like, “Sexism doesn’t matter! It’s 2013!” Or “Racism doesn’t matter! Look at Barack Obama!” What’s scary to me is that maybe men, and some women, aren’t going to shows and being like, “Shut up! Just play your music!” or “Show us your tits!” or whatever—people just take to the internet and rip other people apart.

I was reading an article online about Vivian Girls, and I happened to look at the comments, and it was horrifying. Horrifying! It was every single thing people had said about us in the ’90s—but even worse. That’s what really opened my eyes to, you know, one step forward, two steps back. Maybe it’s safer for women to be at shows now, but it’s not safer for women to be on the internet.