“Intimidating” Is Not a Compliment

As Luck Would Have It 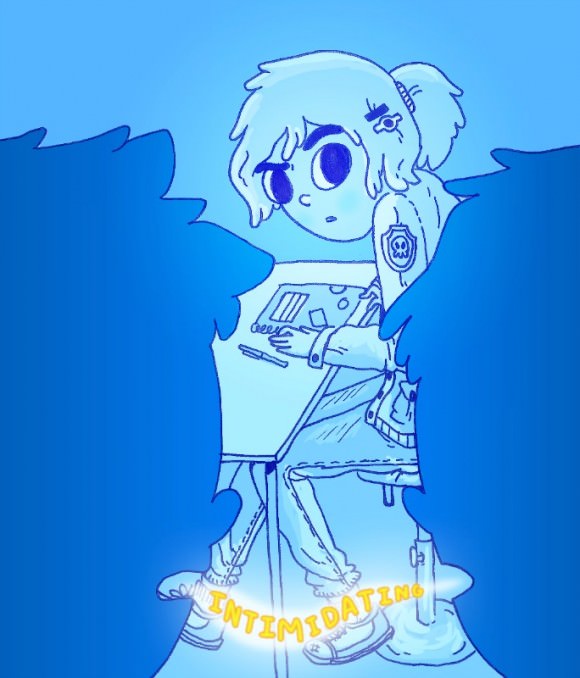 Hazel and I have been friends since ninth grade. We met on the Internet (we read each other’s blogs) and then became friends IRL when we both took classes at a summer art program in Philadelphia. Even though we went to different schools and lived in separate towns, we bonded over our similarities: We were both nerdy, ambitious feminists who liked to dress up and joke around. Also, we’ve both been called “intimidating” by our peers, teachers, and parents, and all of them meant it as a compliment. But is it? A lot of girls we know have been called intimidating, so we decided to talk to each other about what this phenomenon actually means. —Gabby

GABBY: Do you remember what if felt like the first time someone described you as intimidating?

HAZEL: I was whining to a friend about boys not liking me, and he said, “I think guys are just intimidated by you.” I was offended—it seemed like a cop-out! I initially accepted people telling me I was intimidating, but the more I thought it the angrier I got. Intimidating does not mean cool or mysterious, it means scary. I’m quiet, but I don’t think I’m scary! How did you feel the first time someone called you intimidating?

GABBY: I remember feeling pretty satisfied. A friend in high school told me that other people found me intimidating—she said it in a way that wasn’t insulting. At first I interpreted it to mean mysterious or unapproachable; since I usually felt so self-conscious and insecure, I kind of thought, Yeah, definitely! Go on thinking I’m “intimidating: and not the socially awkward weirdo I feel like on the inside.

HAZEL: But then it’s like, Wait, why do these people feel like they can’t talk to me? And then you feel self-conscious.

GABBY: It’s like, Do they think I’m mean? I definitely used to get people saying, “Before I knew you, I thought you were a bitch.” That concerns me so much, because it makes me wonder what they were basing that assessment on—MY RESTING FACIAL EXPRESSION?

GABBY: But seriously, I’d never want anyone to avoid getting to know me because of a vague rumor that I can be mean when it’s not even true. Also, I felt that by calling me intimidating, people were trying to turn into something negative, as in “I don’t want to work in a group with Gabby, she intimidates me.”

HAZEL: Oh shit, you’re right! Just thinking about this on a deeper level, I think I’m just really weirded out that the way I see myself isn’t how others see me, you know? Like I’ll think I’m being nice, but people think I’m mean, and that’s genuinely disturbing.

GABBY: I don’t think you look intimidating, but you do have, like, an UNTOUCHABLE COOL. Like, I THINK YOU LOOK COOL.

GABBY: I don’t want people to think I’m intimidating, yet I also do this thing where I am intimidated by people who are similar to me. Maybe it’s a competition thing? I think I’ve got to unpack that. Like, immediately disliking another girl because you actually LOVE her outfit or something surface-y.

HAZEL: Yeah, I feel that. When I first met one of my best friends, I didn’t like her because she was just like me. I was weirdly protective of my status as the bookish one who knew all the answers in class à la Tracy Flick, and suddenly here comes this brilliant chick with perfect hair who had read as much Sylvia Plath as I had.

GABBY: I’ve felt this with basically every great friend I have—sort of like a game-recognize-game situation. You start out kind of jealous of them and then realize, Wait, whoa, I need this awesome person on my side. I think it’s common to be jealous of someone but you don’t want to admit it, so you call them intimidating. I struggle with distinguishing between jealousy, intimidation, and wanting to be someone’s friend. I guess I’m jealous of people who intimidate me because I wish I could feel as cool as they seem to actually be. I think that’s pretty healthy though. There are so many girls who exist doing great things and being interesting, why wouldn’t you want to be more like them?

HAZEL: I always say I’m jealous of practically everyone, but I really feel like, I wanna be like them so bad. Jealousy to me always implies anger. I don’t feel angry at people who are cooler than me—I don’t like want to wreck their life because they have a boyfriend and I don’t, or they hang out with rock bands and I don’t. Intimidation could just be feeling like you’re inadequate in comparison to a person. You feel like you’re not cool enough to even talk to them or know them.

GABBY: But people also project their own insecurities, too. I definitely do that. If I meet someone who is dressed really well, or just doesn’t seem interested in getting to know me, I write them off as intimidating or too cool instead of risking approaching them and having them reject me. I get intense admiration for people, and then get nervous that it won’t be reciprocated! But sometimes my instincts are right—I’ve met new people and thought they were too cool for me because they acted like they were too good to talk to me. Not worth my time!

HAZEL: I don’t want to waste time with people who won’t give me the time of day! But yeah, it seems like intimidation is all about projection. We’re all afraid to talk to people.

HAZEL: Fuck—snake biting its own tail.

HAZEL: I don’t think being selective makes you intimidating, and you’ll always encounter people who seem genuine and then it turns out they’re not, so it’s good to be aware of the vibes you get from people or what they’re saying about you. I think we uphold this idea of, like, Don’t care what other people think of ya! That is great and awesome, but it’s also totally normal to care what people think of you.

GABBY: Yes—I do not want people to assume the wrong things about me, so I guess I care what they think up to a point. I just don’t want someone to decide they dislike me because of a false assumption before they get to know me. When someone described me as intimidating when I was younger I was kind of like, Shit, do other people think this? Is this my fault? Should I be smiling more? I internalized it completely.

HAZEL: I mostly think I’m not responsible for someone else’s dumb feelings, because, well, I’m not—but I’m still affected by how they see me.

GABBY: When I imagine an intimidating person, I think of a physically strong girl wearing a black leather jacket and perfect cat eyeliner.

HAZEL: That’s hot. I wanna be that.

GABBY: I know, right? Sometimes being intimidating does sound kind of cool. Maybe I want people to be a little scared of me—maybe it’s better to have people think you’re scary, but then discover you’re kind and approachable. Better to be a hidden treasure.

HAZEL: Yeah! Most of the people I meet are very extroverted, and I think when they meet someone like me, who’s more introverted and quiet, they think I’m trying to be intimidating. I think people use the intimidation thing as an excuse to cover up the fact that they’re really just personally scared of talking to someone they think is super awesome.

GABBY: I just Googled the definition of intimidate, and it means “to make timid or fearful, frighten especially, or to compel or deter as if by threats.”

HAZEL: WE’RE NOT SCARY OR THREATENING! Even at my faux-witchiest, I’m not scary.

GABBY: I don’t think I’ve ever frightened someone into doing something for me, but one time in high school this boy I hated said that I scared him. Which I think I DID, because I basically tore apart his sexist, racist statements in class in a way that made him question his existence! But that was satisfying. I think confidence definitely gets roped in with intimidation, too. Like, if you’re a girl and you argue against something, people easily perceive you as an angry bitch. I feel like this hardly happens with guys in high school. They’re called “opinionated” or “courageous” when they speak up. I guess some people get nervous about the idea that a girl can be resilient and smart, so they try to invalidate those qualities by making them seem negative. What do you think about when parents say things like “Boys are just intimidated by you” as a way to explain why they’re not noticing you?

HAZEL: I hate it.

GABBY: I care a lot less now about whether a dude gives a fuck if I exist, but in high school I felt very uncrushable and I’d complain to my parents about not feeling cute.

GABBY: And they’d be like, “Boys are just intimidated by your beauty/brains” or whatever. Of course my parents meant well, but honestly, I don’t think teenage boys were smart enough to actively be afraid of me in that way. I think it was more of a combination of me being shy and not conventionally attractive, and the fact that most teenage boys are pretty awkward too.

GABBY: But I don’t like the idea that boys get to decide what makes a girl intimidating! I don’t think I’ve ever felt intimidated by a teenage boy, but I’m self-conscious around boys I think are cool.

HAZEL: I’ve been intimidated by teenage boys. I’ve had crushes on a lot of boys who were really cute and intelligent, but never acted on them. Boys are just inherently intimidating to me—I’m only friends with girls so I don’t understand boys like 99% of the time.

GABBY: Yeah, that makes sense. I’ve liked boys from afar, and I would automatically write them off because I thought they wouldn’t think I was cute, or I would guess that we wouldn’t share any interests. DUDE, I WAS PROJECTING A LACK OF CONFIDENCE AND BELITTLING OTHERS! Which is so messed up! I have to remind myself that even if you’re the perfectly intimidating girl in my head who wears a leather jacket and great eyeliner, you probably still feel insecure, and you have to pee just like everyone else, and you probably watch Netflix alone sometimes, too.

GABBY: Yeah, it was shocking the first time I found out. So I guess the moral is don’t describe people as intimidating unless they’re literally threatening you.

HAZEL: Exactly—that word isn’t a compliment! ALSO, we’re all intimidated by each other, secretly. ♦