In It to Win It

Styles that give you a competitive edge.

Your Body, Your Self

When you’re striving to be the best, it’s not enough to have an edge over the competition in talent—you’re going to need it when it comes to style, too. Here are a few movies that can help you be a winner in that department. 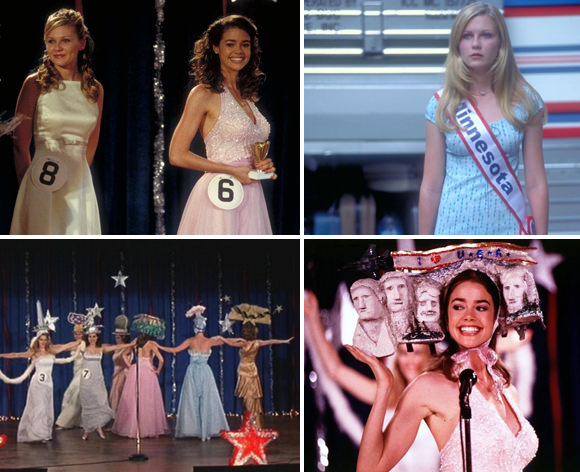 In Drop Dead Gorgeous (1999), the teens of Mount Rose, Minnesota, bring out their best (and worst) to compete in the Sarah Rose Cosmetics Miss Teen Princess America Pageant. Becky (Denise Richards) and Amber (Kirsten Dunst) are the frontrunners, but their personalities and family backgrounds couldn’t be more opposite: Becky comes from Mount Rose’s richest family, and her domineering, former-pageant-winner stage mom, Gladys (Kirstie Alley), will stop at nothing to see Becky win; while Amber works as a makeup artist at the local funeral home and lives in a trailer with her sassy, accident-prone mother, Annette (Ellen Barkin). Amber longs to emulate her idol, the news anchor Diane Sawyer, and believes that winning the pageant is her only chance to leave Mount Rose. This isn’t an easy pageant to win—suspicious and dangerous activity starts to kick off, and it seems that being a contestant might be a matter of life and death! The very idea of competing in a pageant pretty much horrifies me, but I can never resist a long, gorgeous sequined gown! Can you imagine going through the Taco Bell drive-through in one of those? I’m also really into the idea of a customized sash. You can get one from Etsy or eBay and have it say something like NUMBER ONE STUNNA OR HBIC. Why not? 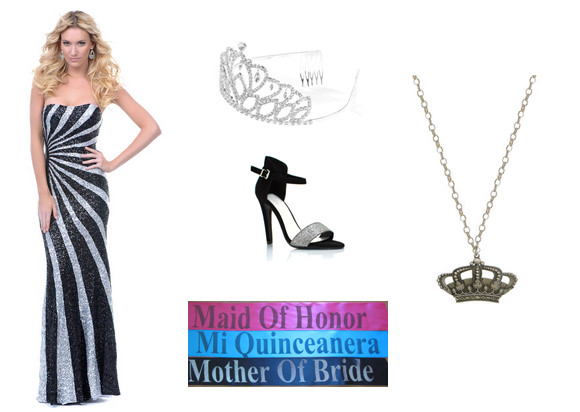 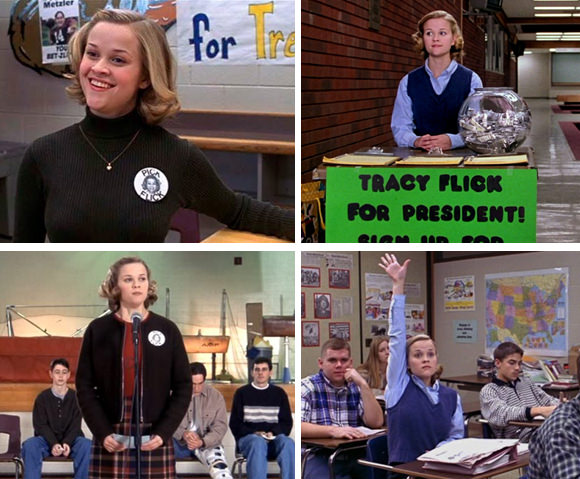 Know-it-all Tracy Flick (Reese Witherspoon) will do anything to win class president in the movie Election (1999), while her teacher, Jim McAllister (Matthew Broderick), will do anything to prevent her from winning. Tracy had an affair with a teacher who happened to be Jim’s best friend, which resulted in that teacher’s being fired and getting a divorce—as a result, Jim is determined to see Tracy fail. He convinces a sweet jock named Paul (Chris Klein) to run against her, and scandal ensues! Even when she’s in the fight of her life, Tracy is always properly dressed, with perfectly coiffed hair, so to cop her look find preppy plaids and collegiate cardigans. Tracy, her own biggest fan, made her own political buttons—if you had a button maker, what would your slogan be? I’d wear one that said “Vote Marie” even if I wasn’t running for office. Try put your own cute smiling face on a button, or your pet’s name followed by 4 Prez, and see if anyone notices. 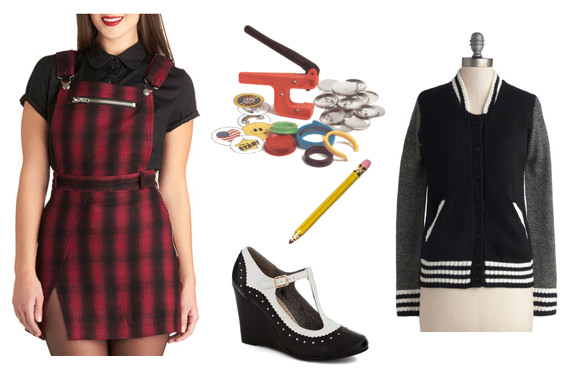 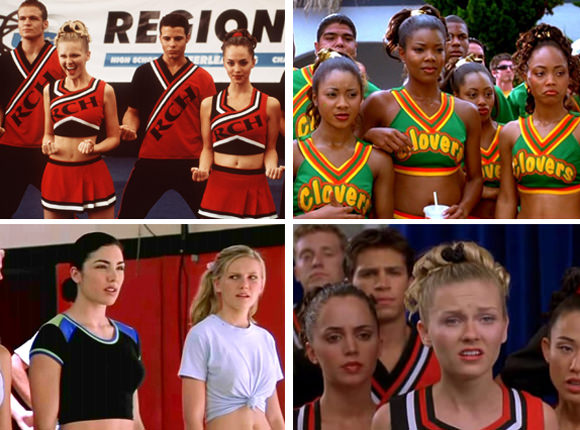 Torrance Shipman (Kirsten Dunst again!) is ecstatic when she becomes captain of her cheerleading squad in Bring It On (1999), but her world is soon rocked during tryouts when Missy (Eliza Dushku), a transfer student who is equal parts rebel girl and sick-ass gymnast, recognizes the routines have been stolen from the East Compton Clovers, the squad at Missy’s old school. This news doesn’t sit well with Torrance, so she creates a whole new routine for the championship while simultaneously starting a flirt-mance with Missy’s cute brother, Cliff (Jesse Bradford). I was never a cheerleader, but I was on drill team, and we wore similar uniforms, so of course a pleated skirt would make its way onto my lifelong list of favorite things to wear. To get the look, search for vintage cheerleading uniforms on Etsy and eBay, or just get the skirt and pair it with a solid crop top, a pom-pom necklace, and a cute pair of sneakers. I’ll be re-creating this look in an all-black theme for my autumn style direction, goth cheerleader. 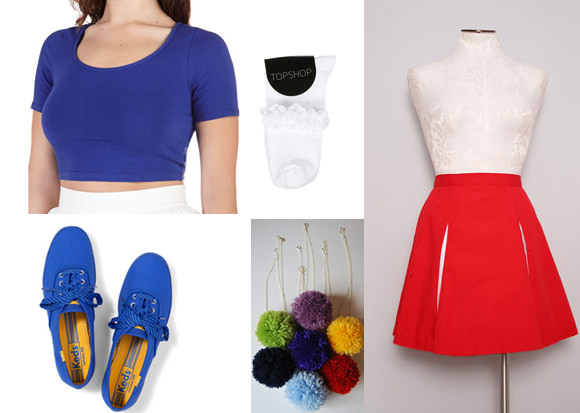 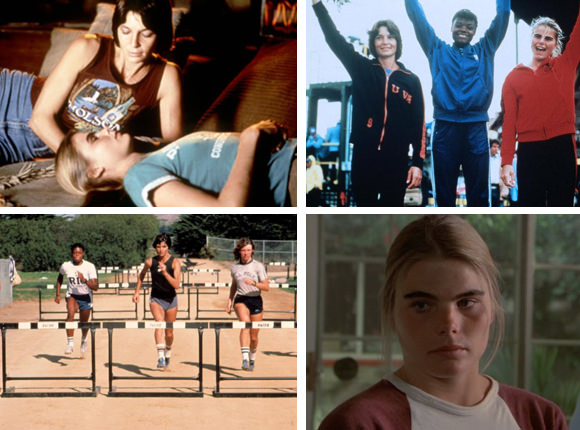 Personal Best (1982) is about two women who are training for the Olympics. Chris (Mariel Hemingway) is a young, inexperienced athlete and Tory (Patrice Donnelly) is the veteran track star who becomes her mentor. The women end up falling in love, and later become competitors. Can you imagine having to compete face-to-face with someone you were previously making out with? I’d be running AWAY from the finish line, OK? Don’t think you’ll have to wear only track jackets and running shorts to copy their sweet ’80s style—get a pair of scalloped Daisy Dukes and cool sneaks, and you’ll be ready to train in the Fashion Olympics right away. 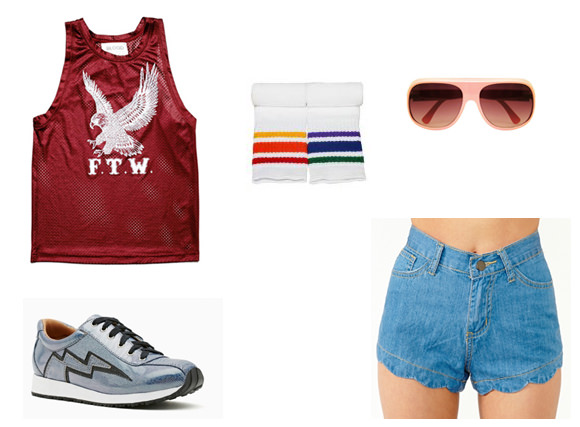