Non-practical advice to help you confirm your greatness.

The Gray Cloud of Success 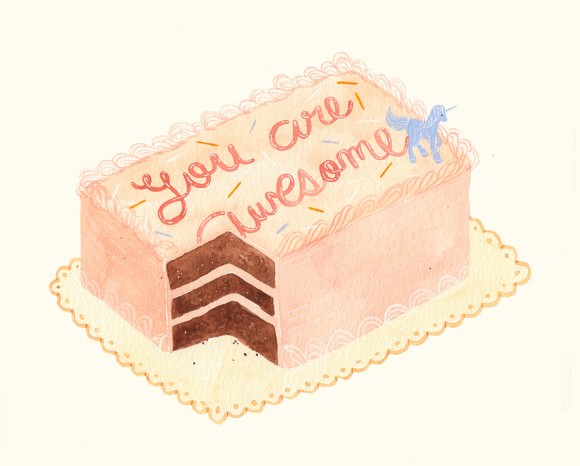 I was a loner as a kid, easily overwhelmed by interaction with other kids when everyone else seemed to find it so easy—I thought something was wrong with me, and it made me feel really sad and lonely. I dealt with my difficult feelings by writing letters to my friends. I recently found an old letter a friend had written in response, asking how 10-year-old me was doing. I told her I was feeling depresso (you know, to keep the tone light and airy), and she asked me to explain. Writing those letters helped me because they got me to work through those hard times by packaging something scary—my confusing, seemingly unfathomable feelings—into something concrete and explicable and therefore less scary.

Other people tried to help me with my troubles. My mum once gave me a self-help book called You Can Heal Your Life by Louise Hay. Hay believed that each person is responsible for their own reality, and that you can overcome afflictions by repeating affirmations to yourself. At the time, I didn’t buy this affirmations thing at all. I’m not challenging Hay’s method full stop—she’s one of the best-selling authors of all time, so they probably do work for a lot people. But I found that her affirmations spoke to situations that didn’t apply to me (money and bills), were too generic (you have to be in the right place at the right time), or used a New Age vocab that I didn’t relate to (stuff about “connecting to the power within you” to “be free”). But the biggest obstacle for me was that talking to myself in the first person (e.g., from the book: “All my relationships are now loving and harmonious,” “I choose health”) makes me feel a bit like a liar, or like an actor—not like me.

I decided I needed to come up with my own strategies for getting out of a rut, which I’m about to share with you, but I’d also like to encourage you to invent some techniques of your own! Because only you know exactly what you need when you’re feeling down. And once you’ve developed the skill to come up with positive ways to deal with awful/destructive feelings, you can get yourself out of all sorts of ruts and ditches in life. There are no rules here—any idea that makes you giggle or feel excited is usually a good one. Think about what makes you really happy, and just go with it! Here are mine:
Dress up for any occasion!

If there’s something coming up that I really don’t want to do, I dress up for it. Every Monday morning when I start my workweek, I put on my happy outfit—bright pink lipstick and a gold dress—as a present to myself. Wearing my brightest makeup and clothing makes facing the day a little easier. I do this to bring out the bravest version of myself, the one that that can deal with hardship the best. Dressing up is also great because it affects people around you—if something is wonderfully out of the ordinary, others usually notice it and perk up too.

Now that you’re dressed, it’s time to get into gear. Need to clean your room? Put on that vintage slip you’ve been dying to wear. An annoying group meeting for a project where you’re doing more than your fair share? Seven layers of lip gloss. Going to the doctor for a scary procedure? Wear your newest, nicest shoes. If you’re saving those lace shorts for a special occasion, then TODAY IS THAT SPECIAL OCCASION.
Don’t just put that affirmation on a Post-it on the mirror—PUT IT ON A CAKE.

I figured out a simple trick with affirmations: When they’re in the second person (“you” instead of “I”) and I’m not saying them to my own reflection in the mirror, they can be very effective! Especially when I put them ON A CAKE. Cake makes me happy anyway, and a second-person affirmation sounds like someone else said it about me, which makes it the legitimate truth and not just my Louise Hay–sanctioned opinion.

I wanted to buy a cake for my last day at my last job, and when I called to order it, the bakery said they would include a message for free. “Can it say ‘Estelle is awesome’?” I asked. The lady on the phone said, “Totally, we get joke messages all the time.” But it wasn’t a joke—I AM AWESOME.

This works because it’s hilarious, festive, shareable, and involves cake.
Be the karaoke master.

Studies have shown that listening to music makes you feel better, and that singing out loud releases endorphins in droves, so you’re physiologically making yourself feel better by singing into that hairbrush as you get ready in the morning. But I like to step that up a notch. You don’t have to go so far as hiring out a room Lost in Translation–style, but you can just do some karaoke in your bedroom! I like to find karaoke tracks on YouTube or Spotify—they’re just cheesy cover versions that have the vocals stripped out. Then I put on some colored mascara, light some candles, and really freaking go for it. My favorite songs for this have belt-out-y choruses, like “I Knew You Were Trouble” by Taylor Swift, “I Could’ve Been Your Girl” by She & Him, and “The World Is Ours” by Catcall. Man, I even feel good just thinking about those songs.
Don’t imagine your enemies naked—imagine them DOING A POO.

People suggest you should imagine people naked if you’re nervous about interacting with them, but I’ve never found that helpful. It’s too distracting! What would her butt look like? Does he have hair everywhere? Mr. McPherson, the math teacher, naked? No—this advice doesn’t help.

If someone’s giving me a hard time, I just imagine them taking a dump instead. It doesn’t help me overcome trouble in any practical way, but it’s an entertaining way to replace any scary images I have of that person. Also, it reminds me that they are human, too, and that I can come up with other strategies to deal with them. Ain’t no better way to humanize.
Get yourself a unicorn turd.

(I have been told on several occasions that I have a poo fixation, but hear me out.)

A friend gave me a moonstone recently, and I immediately said, “Oh! It’s a unicorn poo!” I’m not crazy—just look at that thing! It’s translucent, milky, rainbow colored and perfectly smooth. If that’s not what a unicorn poop looks like, then I don’t know what is. I can’t help smiling when I see it. Does anyone else have a unicorn turd? I ask myself. Nope. I am special.

The moonstone is a reminder that my friends will listen to the strange things I have to say without backing away slowly. Your unicorn turd might be the purple ribbon you scored while thrifting with friends, or the old key you found in the park. If it makes you warm inside or reminds you of your favorite summer day, it’s perfect.
Who run the world? ME.

A couple years ago I saw Kenzie Larsen choreograph and perform a dance to Beyoncé’s “Run The World (Girls).” She even created her own backing video, Beyoncé at the Billboard Music Awards–style! But Larsen changed up the lyrics a bit—in the chorus she cried, “Who run the world? KENZIE.” Oh my god. It changed my life. Now when I hear that song, I substitute my own name in the chorus. Some weird strange magic happens where I feel like Beyoncé is holding me up on her shoulders like Atlas, helping me forget about criticism and achieve world domination, or at least power my way through the crappy moment at hand.
Coming up with your own ways to cope can be a fun release, and remind you not to take life too seriously. It also highlights the most important ingredient in self-help: YOU! Helping yourself is so empowering. Go on—develop your own superpowers. ♦

Estelle Tang is an Australian writer and editor currently hanging around NYC dressed like Björk’s handmaiden. She is a co-mouth at Flavour Palace and a bibliotherapist at The School of Life. Follow her on Twitter @waouwwaouw.