Go Your Own Way

Confessions of a lone wolf. 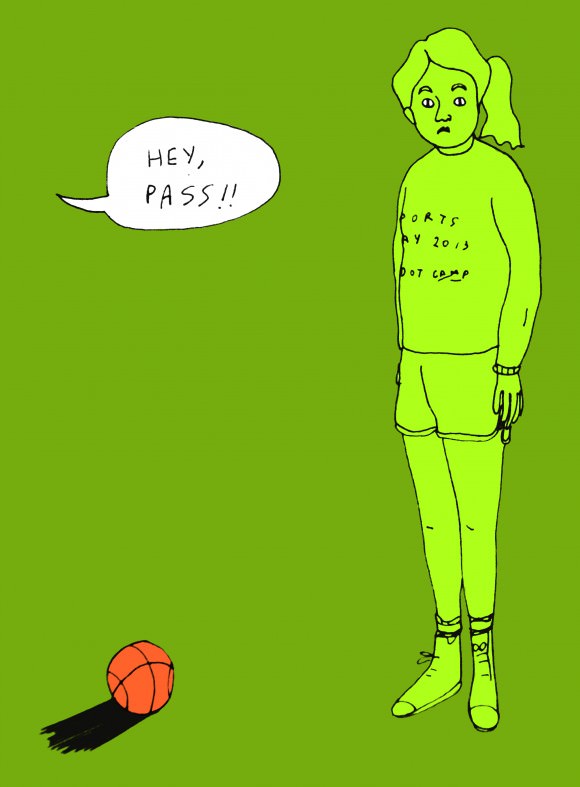 I hated the process of picking teams for gym class, so I used to hide in the huge wooden fortress on the playground when we played dodgeball. I remember feeling relieved when everyone became so engrossed in the game that they forgot I was there. For years, I chased that feeling, and imagined building a big imaginary fortress around myself whenever I felt pressure to join something.

I’m a people person by nature, so it’s hard for me to admit that herd-like antics make me recoil and leave me running for the hills (or wishing I could). I love to collaborate with people, but I’m also very protective of individuality, and have been for as long as I remember. I suspect this came from being in the minority, racially, at most of the schools I’ve attended, having uber-liberal academic parents in a community with lots of military families who tended to be kind of conservative and traditional, and being teased as a kid by some of my cousins and their friends for talking like a valley girl and listening to rock & roll instead of rap—basically, I wasn’t acting black enough for their tastes. I longed to be “normal,” but I wasn’t in so many categories, so I learned to shy away from anything that required me to blend in with the pack.

I hated being forced to join things in high school, like when I was expected to conjure up enough school spirit to get through pep rallies and basketball games, or to try out for a sport (a requirement at my school). Every time I was asked to pantomime this kind of collective enthusiasm, I felt like every fiber of my soul was being sucked away with a vacuum. That sounds really dramatic, but that’s really how it felt. I’m not competitive with other people by nature, but I run a hell of a race with myself, and I resented being forced to pretend I cared about how I did at stuff I knew I wasn’t great at. The architecture of high school is built on forced togetherness, but I was tired of having to explain why I didn’t give a damn about whether our school won a lacrosse game, or getting weird looks when I admitted I would rather be in the darkroom than at a game. Looking back, I know that I should have simply explained, “I don’t feel comfortable spending my time and energy on competitive sports when I really feel passionate about developing my creativity,” but at the time I just felt exhausted by everything I had to do to avoid looking like a spoilsport.

I wove into and out of different groups in high school; I hung out with the nerds, the band kids, the art students, and the popular crowd. I maintained my floater status with pride by sitting at different tables for lunch throughout the week and inviting kids from various groups to hang out at my house or swim in our neighborhood pool, despite being urged to “Choose a group already!” by the alpha types in each clique. I saw myself as a connector and a bridge builder, someone who brought different kinds of people together. I was an inadvertent diplomat in high school—I traveled everywhere and maintained my own culture and customs in every space or group I visited.

I thought the pressure to fit in would end with high school, but my first exposures to the larger world showed me that wasn’t the case—it was almost worse in professional settings. When I was 15 I interviewed for a retail job at a trendy teen clothing store, and I was asked how I would handle advocating for something my superiors decided was in the store’s best interest, even if I didn’t personally believe in it. I didn’t end up taking the job, because I could tell I would never do such a thing, which meant I would never fit in with the culture there.

My resistance to being a “team player” often made me wonder if I’m some kind of freak. Why did I instinctively withdraw from things other people find fun and inspiring? Then one day, when I was still in high school, I was looking through my parents’ books and I came across the postcolonial theorist Frantz Fanon’s declaration that “fervor is the weapon of choice of the impotent” (I told you my parents were academics!), which means that people who feel powerless rely on enthusiasm to give themselves the illusion that they’re powerful and in control, which meant that I was not a freak after all! Suddenly it made sense that I had recurring nightmares about falling into a pit of quicksand in my school uniform, a satin ribbon in my straightened hair and a lacrosse stick in my hand; what I initially thought was some sort of personality defect on my part was really a fear of losing my sense of self to fit into someone else’s ideal—a fear of powerlessness.

I’ve always made decisions with my individualism in mind, whether it’s the choice to join and then quit the Girl Scouts, finally pledging the same sorority that my mother belonged to when she was in college, or even leaving my sexist and homophobic church and look for a congregation that matches the sincerity and tolerance I feel from the God I know in my heart. I refused to join the strangely named Kissy Girl Club in second grade because chasing boys around campus seemed silly and less appealing then reading Judy Blume in the library, and I still refuse to join anything or anyone that doesn’t align with my core values of love, respect, dignity, and reciprocity. In any relationship, the value that I protect most fiercely is my right to do me, and for the most part, I’ll defend that for everyone else too.

Being a lone wolf doesn’t always work out, and sometimes I surprise myself by joining something against my will that turns out to be fun. When I lived in Washington, DC, a mentor criticized me for not attending office happy hours on a regular basis. She explained to me that many decisions, partnerships, and interoffice political dealings happened over cocktails, and said that my lack of enthusiasm was impeding my advancement at the organization. I wish I could say she was wrong, but she wasn’t. As soon as I started attending events and making connections, my relationships with co-workers improved exponentially. I still felt awkward being one of the only young people or women of color at most of these gatherings, but I kept on joining them in hopes that getting to know people on a deeper level would translate into support and trust in the future. And it did.

Being a loner doesn’t mean I don’t love to connect with people—I’m just very selective about whom I do that with. When I’m considering joining an organization or club, I think about what being a member of that group says about me. Moving to New York City and diving into the online feminist community helped me realize that my aversion to joining things had less to do with my fear of mob rule, and more to do with anxieties around being misunderstood, misguided, or affected by peer pressure. But I’ve finally found a community full of people who value the way I define myself, because they do the same thing. I’ve discovered that I may not be into joining, but building connections based on shared values and experiences is all right with me, and it actually feels good!

And I’ve also discovered that there are other lone wolves out there, and that they are they easiest ones to connect with, because they know how it feels. ♦