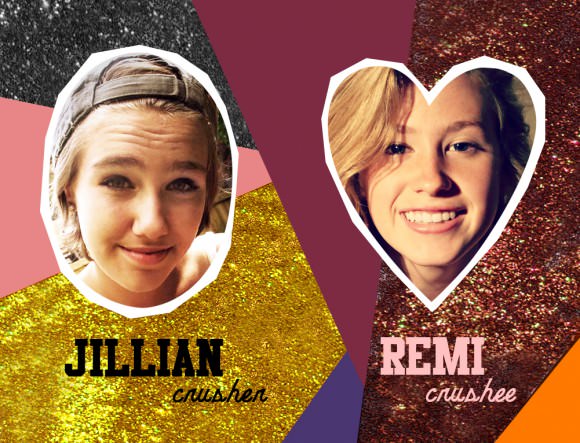 Jealousy almost kept Jillian, 15, and Remi, 16, from talking to each other at all, but these BFFs eventually bonded over their hatred of the movie Twilight and their love of weird food challenges.

Hey Rookie! I want to nominate my best friend Remi for friend crush!

We’ve known each other since we were about 11, when we were in Girl Guides (basically Girl Scouts). At first, I hated Remi; we shared a best friend, and I was completely jealous of Remi in almost every single way because of it. We didn’t seem to really get along, but that all changed when we got to high school. Remi and I don’t see much of our mutual friend anymore, but we do see a whole lot of each other.

Remi is amazing. When I am around her I feel like we could take on a gang of 10 lions and defeat them. She’s always there for me no matter what, and I know that I can just call her and go over to her house whenever I’m feeling sad. We always seem to find fun stuff to do, whether it’s eating Nutella toast on her kitchen floor, running through the halls of her dad’s condo, or longboarding on the boardwalk. I just feel the best when I am around her, because she really does bring out the best in me.

She always has a smile on her face, and is one of the friendliest people I know. She’s adventurous, and she also loves makeup and fashion. She is just awesome! I know that Remi and I will stay friends forever.

ROOKIE: What made you jealous of Remi when you first met her in Girl Guides?

JILLIAN [crusher]: Definitely the fact that we shared the same best friend. I knew that we had a lot in common, but I was just too jealous of her friendship with my friend to give her a chance.

How did you get over that?

We went to see Twilight with a bunch of friends, and Remi and I hated it. Our friends were talking to other school friends, so she and I just started talking to each other. We laughed and talked shit about the movie, and then I realized, like, Oh, she’s not that bad! She was really funny.

When did you go from good friends to best friends?

It was definitely last summer, when we started hanging out and having sleepovers. When she went to summer school, I stayed at her house every day for two weeks straight—we had sleepovers every single night. After that, we hung out every single day.

What do you guys do for fun?

Well, for example, over the course of one day, we had a paint fight and a mud fight and put soap all over her trampoline so it was all really slippery and sudsy. The soap dried on the trampoline, so if you put water on it now it still gets all sudsy, and it also kind of burned a hole in the grass underneath. 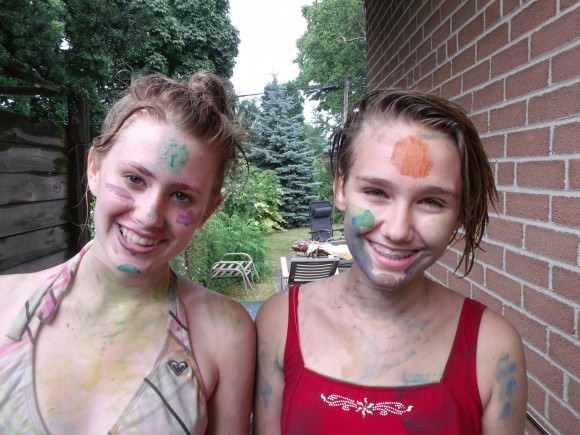 What’s the deal with the baby food?

Remi watched a video called “The Baby Food Challenge,” and the challenge is eating a spoonful of baby food, rating it, and putting the video of you eating it on YouTube. She was like, “WE HAVE TO DO THIS!” We never put anything on YouTube, but I swear, for almost the next month we did the baby food challenge every single time we saw each other.

Can I ask you to rank your top three baby foods?

In what ways are you and Remi opposites?

We have totally different styles. Her style is very laid-back and girly; she likes pink and leggings and high heels and that kind of thing. I wear darker things, high-rise shorts and black band T-shirts with the sleeves cut off.

What have been the biggest changes in your relationship over the years?

Before I started hanging out with her, we both cared a lot about what people thought of us, or if we were popular. When we started hanging out, I realized I don’t need to do that. I can just express myself and have a good time my way. Remi taught me that.

Can you describe a moment when Remi was really there for you?

Once I was at a party with a couple of my other friends. I don’t really like parties, so I left halfway through, but I was supposed to be sleeping over with a girl who was still at the party. I didn’t know what to do so I called Remi, and she was like, “Get your butt over here! I will make us some hot cocoa, we will watch a movie, and everything will be OK!”

When I talk to Remi in a couple minutes, what inside joke of yours can I bring up to surprise her?

You could ask her about the time she peed on the walls of the movie theater stalls.

The time that she peed on the walls of the movie theater stalls?!

Sick. Is there anything else you want the world to know about Remi or your friendship?

She’s the best person in my life, and talking to her was the best thing I ever did. If you put yourself out there, you’ll find friends where you least expect it.

ROOKIE: I’m supposed to ask you about the time you peed on the washroom walls in the movie theater.

REMI [crushee]: I totally did!

I really had to pee, so I went to the bathroom. I had just dumped an entire bag of popcorn in the theater, and I started giggling about it. While I was giggling, I leaned back really far, and then I just peed all over the wall! It was so bad. When I got out of the stall, I told Jillian what happened, and we were rolling on the floor of the movie theater laughing.

How are you and Jillian most alike, and how are you most different?

We have the same ideas about having fun—we just do whatever we want—but we’re really different in our style. She likes to wear old clothes and high-waisted shorts, but I’m more of a sweatpants or leggings and a sweater kind of person. We have different tastes in music, too—she likes rock, and I like mainstream pop.

What’s the weirdest thing about Jillian?

She can make anyone laugh anytime. She makes the best faces and is totally random, and her sense of humor is wild—you never know when she’s going to burst out laughing. 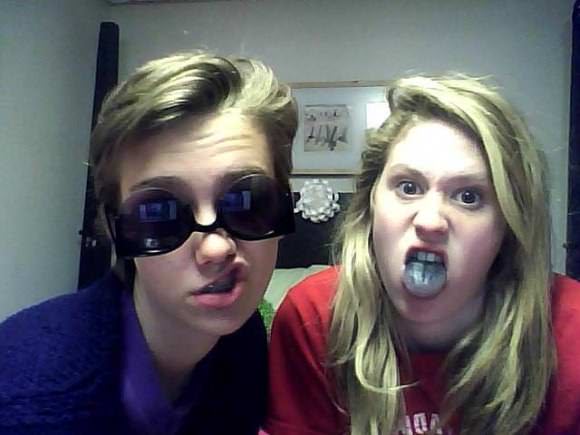 What do you actually like so much about baby food?

It’s not that I like the baby food itself, it’s just fun to go to the store and buy a bunch of baby food and then go home and eat it all. So there are some that we like, but some are definitely gross.

What are your top three favorite baby foods?

There was one that was custard that really did taste like custard, the strawberry one, and then chicken and vegetables, which is actually pretty good.

Can you tell me about a moment that you remember where Jillian really had your back?

When I was having issues with my current boyfriend, she was really there for me. We went to a store and bought a bunch of candy, and then went home and watched a movie and talked about other things besides him, like all this exciting stuff that was going to happen for us. She’s good at helping me take my mind off of things, and makes a real effort to get me happy.

Awesome. Is there anything else you want to tell the world about your amazing friendship with Jillian?

She makes me laugh, even in the hardest of times, and she is just the bomb-diggity-dog. I think everyone in the world should have a friend who’s either exactly like Jillian, or is just Jillian herself. ♦

To nominate your friend crush for Friend Crush, send an email to [email protected] telling us a little bit about her. We will only consider submissions that include both of your names and ages, and a big, clear picture of each of you. Thank you!