Just ’cause you hate pep rallies doesn’t mean you can’t do something good for you.

Literally the Best Thing Ever: The Sims 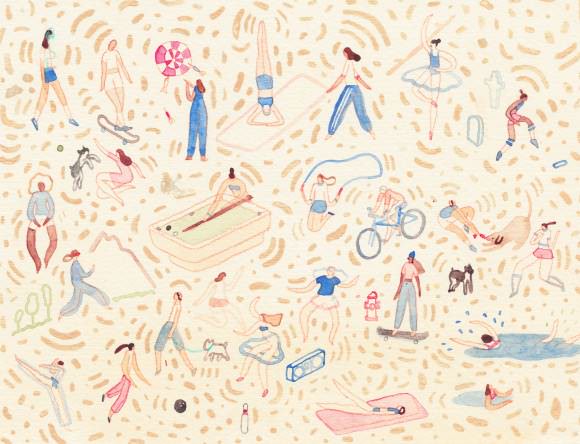 I’ve always hated gym class. Well, it was fine in kindergarten and first grade, when all we did was play duck-duck-goose and wave a rainbow-colored parachute around and roll around on tumbling mats. But once kids started getting competitive—and belittling the kids like me who weren’t the fastest or most coordinated—PE quickly became the bane of my existence. I can’t count how many times I fell on my butt and got laughed at trying to kick the kickball or got hit in the face with a basketball, baseball, or volleyball or had the wind knocked out of me in the school-sanctioned brutality known as dodgeball. I had no idea why any of this was considered “fun.”

There were a couple of things I was relatively decent at—swimming, gymnastics, and ballet—but since I’m kind of a perfectionist and once it became clear that I was never going to be Inge de Bruijn, Gabby Douglas, or Anna Pavlova, I quit them all by seventh grade to join stage crew. The annual President’s Fitness Challenge that I failed every year seemed to reinforce the fact that I was not an athlete and so my time would be better spent hanging out in the theater with the artsy kids.

I happily took on the stereotype of the punk rock kid who hated and avoided any athletic activity like the plague—I was too cool for anything physical except for moshing and walking my dog, which got my frustrations out and gave me some peaceful time to myself respectively. But eventually, after struggling with depression, insomnia, and just being really bored sometimes, I realized how important it is to have some sort of physical outlet. Besides the stuff you hear constantly—exercise is good for your heart, your body, your general health—there are also all kinds of not-strictly-physical benefits to moving around on a regular basis: It’s good for your brain, it relieves stress, and it reduces symptoms of depression. It helps keep you awake when you need to be and asleep when you need to be, and it helps you feel good about yourself.

For those of you who already love to exercise or play for a team, kudos! I’m glad you’ve found a way to make being active fun. In fact, I want everyone to experience what you have. This article is not for you (but here are some that are). This is for the rest of you—the ones ditching pep rallies to read a book in a dark, empty classroom. I was you, so I totally get you. But I don’t think we need to curse ourselves with lifelong unhealthiness just because gym class sucks. You’re a smart, creative, nonconformist individual, right? So blaze your own path! Exercise can be simple, it can be totally goofy (in fact that usually makes it the most fun), and it might be something you are already doing without realizing it.

Here are a few ideas from me and other members of Team Rookie of stuff you can do that will make you feel like a champ even if you aren’t normally the athletic type (and if you are, you’ll probably get a kick out of them, too). In some cases, you won’t even think you’re exercising, and in the rest you will know it and LOVE it.

There are so many things to try—you could take ice skating lessons if you’ve always liked watching figure skaters or check out a trapeze or silks class if you’ve got a fascination with acrobatics. After years of being a hater, I’m willing to try anything, because I’ve learned that when you take the competitive/oppressive gym-class mentality away, embrace your skills or lack thereof, and allow yourself to be silly, you will actually have fun. Even if you aren’t a natural at them, if you’re enjoying yourself, you’re doing it right. ♦