As of this Thursday, this website will be two years old. Crazy, right? I can’t quite wrap my brain around it. What I CAN wrap my brain around is that I am a happier person because every month, a bunch of talented people make a bunch of exquisite stuff, and then a bunch of smart, funny, thoughtful people read and look at and comment on it. What lovelier cycle is there? The MENSTRUAL one? How CLOUDS get made? (Sorry, Mother Nature!) You guys are the best, and we get to do this only because you read it, and we get better when you tell us what you need or share your own work, so please continue to do all of the above, along with continuing to be your beautiful selves. ♥

This month’s theme is VICTORY, and I must credit Amy Rose for the terrific idea. Here’s what Anaheed said about it when we asked our staffers for ideas:

It’s important to talk about stuff like depression and sadness and the pain of being a teenager and the pain of being a girl in an anti-girl world. It is essential that We As a Society listen to girls when they tell us that stuff, and I love that Rookie is a place where they can feel safe sharing it and, in doing so, can see that they’re not alone and can maybe even feel a little bit taken care of. But it’s equally important, I think, to do something we aren’t quite as wont to do, for so many reasons (including: healing seems more urgent, sad times are less talked about in general and we wanna fill a vacuum, as a group we tend to be maybe slightly more prone to depression/anxiety than a random sampling of the population—though maybe that could be said of any group of mostly young mostly girls), and that is to CELEBRATE our VICTORIES. We are encouraged to be insecure. Stepping up and saying HEY I’M AWESOME is taboo for girls, but it’s like, you know Beyoncé doesn’t give a shit if people think she’s “stuck-up” or “too intimidating” or “full of herself.” I see this month as VERY BEYONCÉ. Beyoncé, Gabby Douglas, Taylor Swift, Michelle Obama, Angelina Jolie. People who are unapologetic about how awesome they are.

I also see VICTORY as: Standing up to people. Standing up especially to AUTHORITY. Being proud of yourself, both for stuff that other people are impressed by and for stuff that other people might laugh at you for. SCHOOL SPIRIT—like, even if you’re the black-eyeliner-wearing alterna-kid smoking weed under the bleachers, it’s all right to have your heart filled with LOVE for and LOYALTY to the people around you, even the ones you don’t know. Rookie is your virtual cheerleader this month, being all RAH RAH every time you accomplish something, big or small.

I like this idea for September because high school is so depressing!! I had forgotten exactly HOW shitty it was and then at some point this spring there was a day that Tavi and Ruby were both texting me photos from INSIDE THE WALLS OF THE AMERICAN HIGH SCHOOL and I was like OH MY GOD IT’S EVEN WORSE THAN I THOUGHT. And so September seems like a time when everyone needs a boost.

HATERS AND LOVERS OF HIGH SCHOOL ALIKE, this one’s for you. Personally, I go back and forth (like most people?), but I’ll save all those thoughts for some giant reflection at the end of the year when I graduate. Graduate! Senior year! WEIRD. I got pretty sentimental about it on my first day of classes last week, so here’s a playlist I made of 13 songs about being between the ages of 13 and 18. 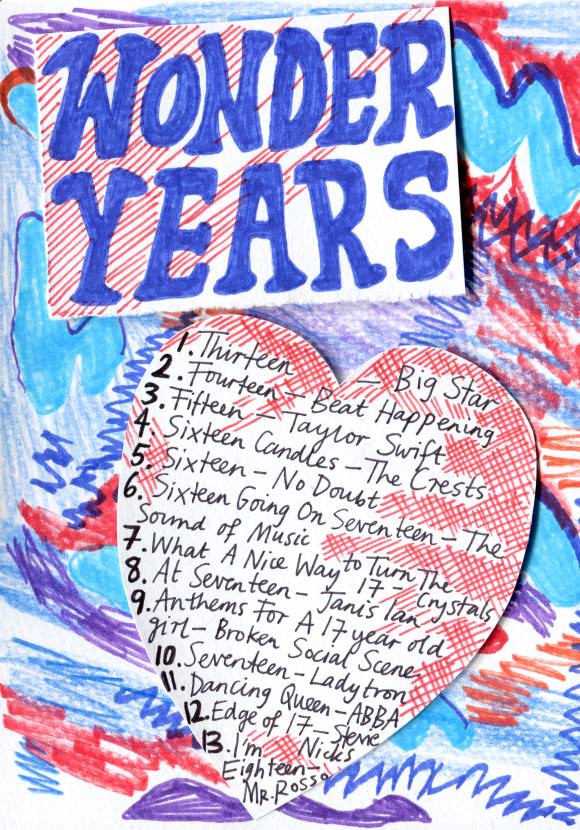 Enjoy this month, and this school year!