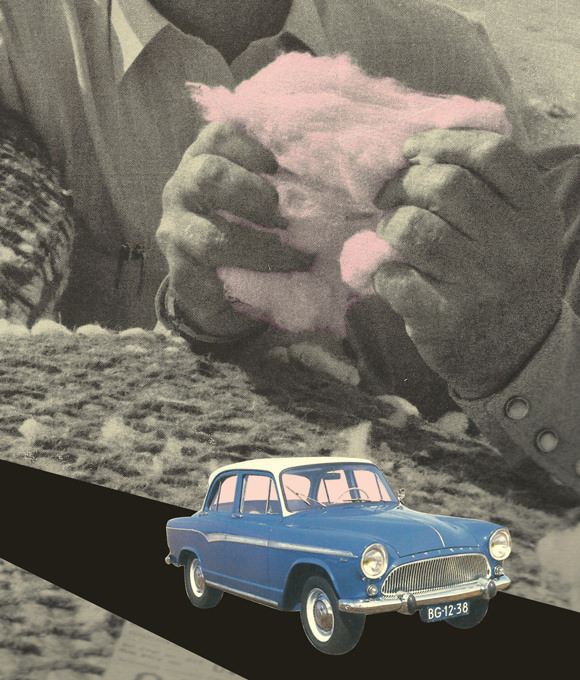 It is the last night of the Wilton City Carnival, and though I’d rather be anywhere else—like in the middle of the giant red storm that’s endlessly swirling around Jupiter—I’m standing behind a ramshackle booth with Micki Porter, selling bags of cotton candy to drunk adults who’ve spent way too much time in the Spirits of America tent. My mother was Carnival Queen in 1982, and she signed me up for this 8 PM to midnight shift because she thinks volunteering is important (and probably also because she wanted to be able to tell her friends that her weirdo daughter did, in fact, have somewhere to be on a Saturday night). Micki, who’s said approximately seven words to me since third grade, is here because she got 20 hours of community service for tagging an abandoned silver factory with her signature, an angelfish symbol. We’re a pretty pathetic sales team, because what can you really do to sell cotton candy? If people want to eat spun sugar, they’ll find you.

Something happens to adults when they go to a carnival, man. It’s like that creepy scene in Pinocchio where the bad boys turn into donkeys. It’s only 8:30, but we’ve already gotten into three fights with morons who think our candy is overpriced or too blue or not flossy enough. All of these people were over the age of 25. It seems sort of impossible at times to combine the fun of being an adult with the fun of being a kid without coming across as a total jackass.

Right now we’re dealing with a guy who is wearing sunglasses at night, and complaining that five dollars is a lot of money for an enormous bag of cotton candy. I guess it is, but how would I know? I’m just here because my mother made me show up, not because I’m in the cotton candy business, as evidenced by the giant letters spelling out VOLUNTEER on the back of my shirt.

“I’m just saying,” the dude says. “Five bucks? That’s ridiculous.” He’s holding a giant plush bear under his arm. A woman I assume to be his girlfriend (and the lucky bear recipient) is next to him, her eyes locked on her phone. They are standing in that close but distant way that only two people who have spent a lot of time together can; her arm brushes up against his, but it’s just an ordinary movement—there are no sparks. She is texting someone quickly and chewing gum like it’s rubber cement.

“Don’t be cheap, Brett,” she says, never lifting her eyes from her phone.

“I’m not cheap,” Brett fires back. “It’s just, like, unless you got what’s-his-name, Pumpernickel, spinning this shit into gold back there, it ain’t worth five bucks.”

A line begins to form behind them.

“Are you in or out, dude?” Micki asks. “There’s a lot of people waiting.” Brett hands me a crumpled five-dollar bill and Micki tosses him a bag of pink and blue fluff.

“This better be worth it,” Brett says. His girlfriend laughs at something on her phone. They turn to leave, and I kind of miss them already. It is pathetic, I know, but I like watching people communicate—all the fun of having friends, none of the actual interaction.

“What a dick,” Micki says under her breath as the next customers step up.

We don’t say another word to each other until midnight, when we start to close up the booth.

It takes roughly 30 minutes to close up a carnival booth, but it looks like everyone else has cheated and started their work early, leaving Micki and I alone as the carnival lights go down. We scrape out the excess sugar from the giant mixer, stack cardboard cones for the next morning’s shift, and make sure that the lids are closed tight on the candy powder. The only other team still working past midnight is the husband-and-wife team who run Pat’s Pastry Wagon across the way from us. Rumor has it that if you knock four times while ordering a brownie, you get a special one. Their booth, as you can imagine, is insanely popular.

“Which one’s Pat?” Micki asks, looking in the couple’s direction. The husband is locking up the wagon, and the wife is carrying a giant Tupperware container to their truck.

“My friend had one of those brownies,” Micki says. “You know, the special ones?”

“Yeah. You know what the special part really is?”

“Weed?” Ugh. I never know what to call drugs. Weed? Pot? Not reefer, because I am not a 65-year-old health teacher.

Micki laughs. “Spirulina,” she says. “It’s like this green hippie health thing. Those two are smart as hell. Marketing geniuses.”

“Maybe we should have told people our cotton candy was made of meth,” I say.

Pat and Pat, as we’ve decided to call them, hop into their truck and drive away, giving us a courtesy goodbye beep as they leave us alone in the carnival yard.

“I think we’re done,” Micki says. She gives the booth a once-over and takes the keys out of her pocket. “All we have to do is lock up, and then we can get the hell out of here.” She stops for a second. “What time is it?”

“Good,” she says. “I got here at seven for prep, so that’ll count for six hours.”

“So the community service thing—” I stop before I finish the sentence, because I already know what a jerk I sound like.

“It’s a requirement,” she says, sounding annoyed. “We DO go to the same school, right?” It’s the first time either one of us has acknowledged that we kind of know each other.

“Well then you know you need 20 hours of community service to graduate, right?”

“Not me,” she says. “I’m getting out a year early. Took extra classes over the summer and did some college work, so now I’m one year closer to never having to be in this stupid town ever again.”

“I did tag that factory though,” she says, smiling. “But that’s between you and me and people who appreciate art. And Kevin Barnes, because he bought the paint.”

“Kevin Barnes? The kid who was hall monitor in eighth grade?”

“Oh, you don’t even KNOW about Kevin Barnes!”

“He got me sent to detention once for being disruptive in the hallway,” I tell her, “because I dropped my bag and almost knocked someone over trying to pick up a tampon before anyone saw it.”

We both start to giggle.

“You should come hang out with us sometime,” she says. “Kevin can handle tampons now, I think.”

“Yeah, maybe.” I always say maybe when people ask me to hang out, because the answer is probably no, but no sounds mean, and yes is just a lie. Maybe offers possibilities. Maybe is hopeful.

We start to walk to the back lot, where our cars are parked. Our clothes and hair smell like hot sugar and sweat, and our feet hurt from standing on uneven grass. The air is humid—August is in full swing and our cars call to us like magical beings, promising plush interiors, air conditioning, and songs that don’t involve accordions or calliopes. The lot backs up against the deep, protected woods of the park grounds. A dirt road leads up to a fake castle that serves is a magical place for children and an unimaginative place for virginity loss. We can see the lot in the distance as we trudge past the edge of the woods, the sounds of crickets and owls keeping us company.

And then someone, somewhere beyond the trees, says HELLO in a deep voice and starts to laugh.