You Will Not Hook Up at the Show

Learn from my mistakes! Don’t even try it! 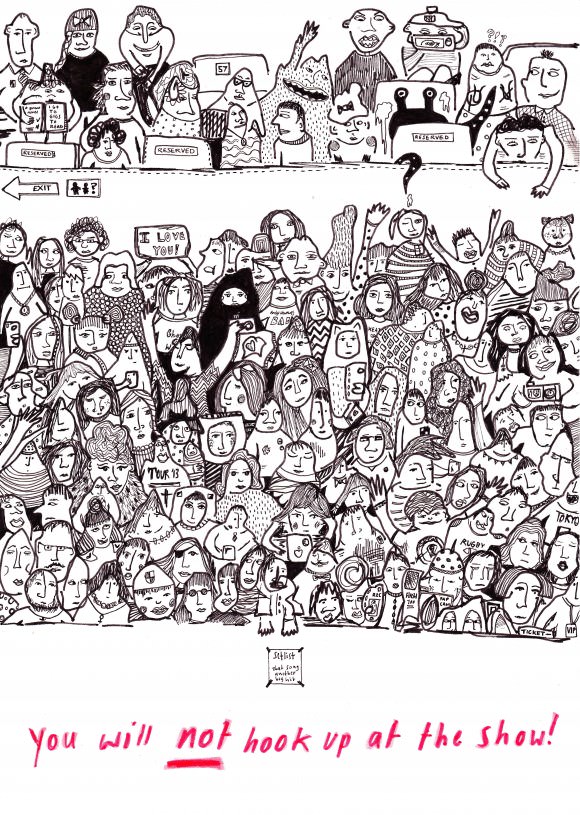 You heard that your favorite band was coming to your town for a show. You made sure the show was all ages, you figured out which of your friends are also going to the show, you dealt with the meaningless Ticketmaster convenience charges to secure your place at the show, you looked forward to the show, and maybe you even planned an outfit for the show. Now it’s Saturday night and you’re at the show, surrounded by all the other people who also went to the show. People who also love this band that you love, and who you might have other things in common with. Maybe you should talk to a few of them, you think. Some of them are cute boys/girls—maybe you could even hook up with someone at the show. You might find LOOOOVE at this show!

Listen to me: You are not going to hook up at the show. Yes, you are surrounded by people who share, at the very least, your taste in music. One or more of them could very well be best-friend/significant-other material. But if you go to the show trying to make that happen, you are going to be disappointed.

This isn’t your fault. You are a catch, I know: You’re interesting and funny and smart. You have very important opinions, you look great in whatever you’re wearing. People are missing out, seriously. But the truth is, shows might be the worst place in the world to meet people. You are watching a band making a lot of loud fucking noise. Even the conversations you have with your best friends at a show come out stilted. There are just so many distractions. It’s crowded, it’s smelly, it’s dark, and it’s full of strange people. How can you be expected to talk a cute boy/girl into giving you their number when you have to lean into their ear every time you want to make a hilarious joke?

It doesn’t make any sense, but somehow, culturally, we have this idea that your local rock club is a prime spot to mingle. There are so many shows/movies/zines telling us we’re going to go to a show and meet people to hold hands with, make out with, and (yes) fall in love with. Ever since Seth Cohen gave Summer Roberts a Death Cab For Cutie ticket on The O.C., I have spent countless teenage evenings saying, “This is the night”—only to return home after each show having acquired nothing more than a T-shirt. I would lie in my bed wondering if I would spend every night of my life like this, wondering what was wrong with me. I wasted so many valuable years working on a vast comic fantasy of some world-conquering romance that would begin with us locking eyes over a sea of sweaty fellow music fans. I would daydream about laughing with my hypothetical girlfriend, reminiscing about how we met at that fateful show. It never started anywhere else, because in my head, EVERYONE ELSE IN THE UNIVERSE was finding love at shows, and I was the ONLY PERSON IN THE UNIVERSE who was going to shows and not finding love.

I defined the entirety of my teenage life by knowing exactly what was being recommended on Pitchfork every day, and I went to a high school that wasn’t overflowing with likeminded children. When you are in high school and spend most of your afternoons reading music reviews, it immediately becomes “your thing.” I bought a boatload of band shirts, I may have used the terms post-rock, chillwave and freak folk in casual conversation, I searched the basement until I found my dad’s old record player (second shelf, next to the INXS LPs,) all because I thought once I completed the indie rock uniform, a theretofore hidden herd of alterna-teens would suddenly pop out of their secret lair and beg me to join them.

Obviously, this didn’t happen. School remained the same, only now I was the kid who ordered his jeans off the internet. This is not to say I had a miserable time in high school—far from it—it’s just that jumping into music like that didn’t make me feel any less isolated.

That’s why I put so much emphasis on the shows I went to. Watching live music was the only time I felt surrounded by my “true” peers. Even if I was rumbling the family van down to the Ché Café (an all-ages DIY punk space at UC San Diego with an unreliable vegan buffet) every weekend or getting sequestered on the under-21 balcony at the local House of Blues (couldn’t see Baroness, was literally standing in front of a pillar), it still felt like I was finding my community. The full extent of my romantic potential seemed entirely dependent on how I looked and whom I talked to during the brief moments where all the kids like me were in the same room, and it felt like I was constantly missing my chances. Maybe it’s because a small part of me believed that The O.C. was based on true events, but deep down something convinced me that my social life was going to live or die with the shows. Unfortunately it’s an awful lie of being young and interested in music that you have no chance of finding true happiness until you meet someone with the exact same taste as you. If you buy into that notion like I did, you are doomed to repeat my mistakes.

The situation didn’t improve when I went to college, even though I picked a school in the alternative-culture mecca of Austin, Texas (city motto: Keep Austin Weird)—a city I had literally never visited until the day I moved there. I had no friends or family within the entire state. I knew nobody, and that was kind of the point. That’s OK, I told myself. I’ll just meet people at shows. I went to a lot of shows that year, some I didn’t even want to go to, because it was literally the only thing I could do that didn’t involve hanging out with the people who lived in my dorm, who at the time I thought were “weird” because they didn’t like the same music I did. It takes a certain level of arrogance and self-delusion to believe that the people around you aren’t worthy of your time because they don’t share your superior tastes, and that only the hypothetical people you’d meet at a show could possibly meet your exacting standards—but that’s exactly where I was in the summer of 2010.

Needless to say, I didn’t meet a single person, not even a friend, at these shows, and I most certainly didn’t find love at of any of these shows. Most of the time I was either standing awkwardly in the general-admission area or haphazardly trying to inject myself into conversations without having been invited to do so. I remember one Thursday night when I saw some poor girl who I thought looked lonely enough to consider talking to me, so I approached. I said my name was Luke, and she misheard me and thought I said “Ruth,” which caused me to try and make a Ruth Prawer Jhabvala joke. Do you not know who that is? Neither do most people—including this poor girl. (Indian novelist, check out Heart and Dust.) This girl did not get my Ruth Prawer Jhabvala joke, because she wasn’t the type of alien who’d catch an oblique literary reference out of fucking nowhere, and she didn’t want to be talking to me in the first place. I’m pretty sure that’s when her boyfriend returned with their beers anyway.

Now, I’m not saying that no one has ever found their soulmate at a show. I’m just saying it’s really, really unlikely, and that you therefore shouldn’t pin your hopes on it. For one thing, you’ll be disappointed, and for another, you’ll enjoy the show less if you’re constantly scoping the crowd. And shows are fun! They’re a communal experience, where you get to feel the energy of a whole bunch of people loving the same music at the same time, and that is magical. But don’t confuse communal with social. You wouldn’t be looking for romance at the movies, or at a live-reading, so why should a band be any different? If you go to the show just because you really like the band and you want to enjoy their music with a bunch of strangers (who will remain strangers), things get a lot more enjoyable and a lot less anxious. It’s amazing how simplifying the expectations can make your night so much happier.

So, one more time: You are not going to hook up at the show. And thank god, because can you imagine how lame the show would be if everyone there were looking to hook up instead of enjoying the performance onstage? You would hate it. Go to the show and sing along with your favorite songs, dance or just close your eyes and get caught up in the music. But if you’re looking for love, you’ll probably have better luck at the mall. ♦

Luke Winkie is a writer and former pizza maker from the hills of San Diego, California. He currently lives, studies, and cries in Austin, Texas.