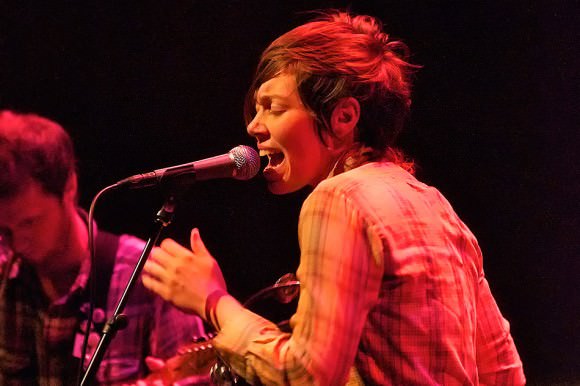 Heather McEntire is a one-woman enterprise—she is the creative director for a girls’ rock camp, runs a small record label, and fronts Mount Moriah, who released their debut for Merge last year. We asked her to do this month’s theme song, and she in turn asked her friend Casey Cook, the singer and drummer from Midnight Plus One (whom you may remember from earlier this month) to join her. They jammed this gem out in a weekend, from inspiration to finished song, and it arrives right in the nick of time for the start of school.

I recently spoke to Heather about growing up queer in the South, teaching girls to rock out, and her complicated relationship with cheerleading. —Jessica

JESSICA: This song has a cheerlead-y vibe. I really like the lyric “Say you love me through the megaphone.” What’s the inspiration behind it?

HEATHER MCENTIRE: Thanks! Well, I wrote this song with Casey Cook. We were really inspired by the image of those cheerleaders in the 1950s in Mississippi who fainted in unison. That led us into a cheerleading-research rabbit hole, with midcentury chants as an abstract jumping-off point. I imagined this secret love affair between two female cheerleaders, and we tried to create a romantic dialogue between them. It was fun playing with the traditional stereotype of cheerleaders as conservative and boy-crazy.

When I was in high school, I was fascinated by the cheerleaders and the dance-line girls, and with the feat of synchronized dancing. What was your relationship to that scene when you were in school?

I’m mesmerized by synchronized and choreographed movements, too. I had some friends who were cheerleaders in high school and I always played sports, so I found myself in close proximity to the cheer squad—traveling to games on buses, practicing at the same times. Even though I was really engaged academically and athletically in high school, it was a really awkward time for me. I was struggling with my sexuality and carrying around this big secret that even I didn’t really know—I was queer, but I didn’t know that word yet. It was dangerous to be anything but straight where I grew up, so I pushed my crushes on girls into a dark corner of my mind and hoped they would go away. Cheerleading is such a sexualized sport, and I remember it being really weird to witness that energy and also be the one they were cheering on to win the game. They represented this world that I couldn’t quite understand: They were confident in their bodies and flaunted them, they wore makeup and short skirts, they were loud, they were having sex with boys, they kept ribbons in their hair, they could smile and smile and look like they really meant it. They were adored.

Is this theme song a one-off for Rookie, or do you do a lot of home recording outside of your band, Mount Moriah?

Since Mount Moriah has slowed down touring for the rest of the year, I’ve been using that time to work on solo projects and collaborations with friends and local musicians. We wrote and recorded this in one day at my house, on the outskirts of Durham.

Can you talk about how you recorded it?

I used a Blue Snowball USB mic and recorded everything with it on Garageband. We put a T-shirt on the snare drum to dampen the volume, and I played guitar through this little old 25-watt Knox solid-state amp that has nail holes in the speaker. Nothing fancy because I don’t have anything fancy. We didn’t labor over it too much, just kept it lo-fi, straightforward, and raw.

Do you and Casey know each other through Rock Camp?

Yeah, I met Casey through Girls Rock NC, a nonprofit where I work as creative director and summer-camp director and coordinate the after-school programs. GRNC is the third-oldest of all the Girls Rock Camps, and we’re celebrating our 10-year anniversary next year!

What goes on at Girls Rock Camp?

Basically, we hold camps and workshops, curate community events to promote feminism in our communities, and encourage girls and women to be creative and confident. We teach them how to play music, write songs, and express themselves.

In Mount Moriah, your sound leans toward a luscious vintage-country feeling, but before this you were in rock bands. Did you grow up with country music?

I grew up on country music and gospel music—it’s hard not to when you’re in the rural South. By the time I went to college, I was hungry for something else, and punk music saved my life. I needed an outlet to express angst, confusion, and depression. I needed to physically yell and scream and kick around and shake my body. It was the only thing keeping me from completely losing my mind. Music is still very physical for me. The purest, most transcendent moments happen to me when I play music and perform. But through my 20s, I didn’t want to hear country, and I didn’t want to talk about religion. I wrote cryptic lyrics and made my guitar as noisy as possible. Some part of me must have been looking for a different kind of vulnerability, and I began writing songs that had vivid narratives and melodic vocals. I became interested in storytelling, and I started telling my own, but Mount Moriah is also a vehicle for me to explore spirituality, to discover the intersections of heritage, faith, conservatism, and progressivism. The South is complex, and I find it really inspiring to create here. When I am at my most relaxed, when I am really comfortable around someone, my twang is really heavy. This must have been what happened when I composed songs for Mount Moriah—I must have started feeling free.

How did you go from just liking music to making it?

I got involved with a campus radio station when I was in college. I remember listening to Team Dresch for the first time and thinking, Wow, so you can really just say whatever you’re feeling? That may be a simple thing, but I didn’t have that freedom growing up. I started a band called Bellafea, and we played around town. Music was a language I could teach myself to speak, and it gave me permission to express myself succinctly and passionately. I graduated with a BFA in creative writing, moved to Chapel Hill, and worked in book publishing for a little while. When I saw the rich music scene there and saw people prioritizing music, I was motivated to pursuit it more intently. I starting working in rock clubs and record stores, started a record label, booked shows and tours. I’m a pretty focused and driven person, so I approach music with devotion. I write and practice and record a lot. It’s fun! It’s also how I make a living. ♦