A weirdly high number of musical geniuses died at the age of 27. I thought I had to do the same if I was going to make anything great. 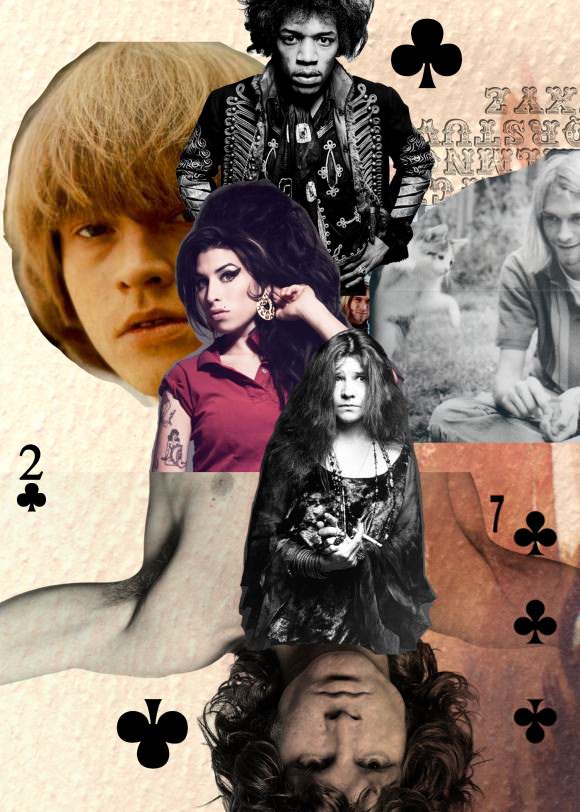 When Kurt Cobain was found dead—from an apparently self-inflicted gunshot wound—on April 8, 1994, his mother, Wendy O’Connor, said something mysterious to the local paper: “Now he’s gone and joined that stupid club. I told him not to join that stupid club.”

The “stupid club” she was talking about doesn’t hold meetings—all its members are dead (though one can only imagine the band they could form in heaven). Known as “the 27 Club,” it’s a list of rock stars who died tragically at the age of 27. Among its most famous members are Brian Jones, the Rolling Stones guitarist who drowned in a swimming pool in 1969; Jimi Hendrix, who purportedly choked on his own vomit while under the influence of barbiturates in 1970; Janis Joplin, who died 16 days after Jimi of a heroin overdose; Jim Morrison of the Doors, 1971, cause undetermined but seemingly drug related; Chris Bell, Big Star founder and songwriter, car crash, 1978; D. Boon of the Minuteman, van accident, 1985; Hole bassist Kristen Pfaff, heroin overdose, 1994; Richey Edwards of the Manic Street Preachers, who suffered from depression and disappeared without a trace in 1995; and Amy Winehouse, who was found dead on her bed, surrounded by empty vodka bottles, in 2011.

What is it about 27? Ever a huge nerd, I did some research. I already knew how Jimi, Janis, and Jim had died because I’d gone through a ’60s phase in seventh grade (before I discovered grunge), but I hadn’t realized that they’d all been the same age. Twenty-seven. Eerie. Messed-up. But legendary. I was (and still am) obsessed with myths, and here was one that was going on in the real world. The old myths I read about in books were invented to help humans explain things like why the seasons change, but that’s just another way of saying they help us make sense of the bad in the world. The 27 Club did that for me—it gave me a way to understand the climate of my own life.

Like many of Kurt’s fans, I was devastated when he died. I was a freshman in high school, and Nirvana was my favorite band. I was struggling with depression, self-injury, and being bullied, but Kurt had been an outsider like me, and if he was able to become insanely famous and adored, maybe the world was a more accepting and less cruel place than it seemed to me at the time. He was my hero, in other words. In the journal entry I wrote the day I learned the news, I was straight-up pissed. I called him “dumb” and wondered if he’d considered his wife or their daughter. I questioned why people take their own lives, asked Kurt why he did it, and said I never thought he was “like that.” Meaning suicidal. Meaning not “strong enough” to fight through his depression. But I knew why—not why he, specifically, chose suicide, but why anyone might feel like doing that. By that point in my high school career I’d been sent to the guidance counselor for writing poems that “sounded suicidal” (“I lie there, thinking, wondering / How would it be if I were gone?”—in retrospect, I understand my eighth-grade English teacher’s concern), and even though I’d sworn “I don’t want to be that girl” in my angsty poetry, there had been a couple of incidents where my best friend had to wrestle a bottle of Tylenol from my hand. Though I couldn’t explain it to her or even articulate it in my tortured poetry, sometimes it felt like I was trying to contain a thunderstorm inside of me—I had flashes of anger that burned my stomach, I often wanted to cry so hard I couldn’t breathe, and the world around me was tinged gray like I was living inside a dark cloud. Suicide would be a way of stopping those feelings. I think I was angry at Kurt for being “like that” because I was afraid that I might be “like that.” I wanted him to be stronger to assure me that I could be too.

In the days that followed his death, I read every article about Kurt’s life that I could get my hands on. I felt like knowing what was behind his torment would give me insight into my own. His mother’s quote about “that stupid club” made such an impact on me that I memorized it. I found it weirdly comforting, because if so many of these brilliant artists struggled with depression and/or addiction, that meant it might be possible to make something beautiful out of my own dark feelings. Even though they died young, they had managed to leave behind an incredible legacy, and that was inspiring.

The most fascinating story in all 27 Club lore is undoubtedly Robert Johnson’s. Johnson was a master of blues guitar whom people like Eric Clapton, Keith Richards, and Jack White count among their biggest influences. But he wasn’t a prodigy—the story goes that in the beginning, even though he loved the blues, he was terrible at playing it. Then one day he disappeared, and when he returned to his hometown of Robinson, Mississippi, a year or two later, he was scary good. Like, supernaturally good. A legend sprang up that he had had a midnight meeting with the Devil himself at a crossroads in Clarksdale, 50 miles away. Satan had offered Johnson musical genius in exchange for his immortal soul, and Johnson took the deal. Sadly, the Devil didn’t have to wait long to collect on his end of the bargain: Johnson died, apparently of strychnine poisoning, seven or eight years later, at, yes, the age of 27.

Back when I first read that story, I decided that the Devil had written Kurt’s, Janis’s, Jimi’s, Kristen’s, and the rest of the club’s deaths into the fine print of Johnson’s contract, and that metaphorically, this meant an early death was the price that Satan had decided all mortals should pay for artistic brilliance. I didn’t even believe in the Devil, but this made a good story, and even back then I thought of myself as a storyteller. I was also a depressed person looking to give her depression a purpose.