I will always believe in psychics and fortunetellers, even if they aren’t real. 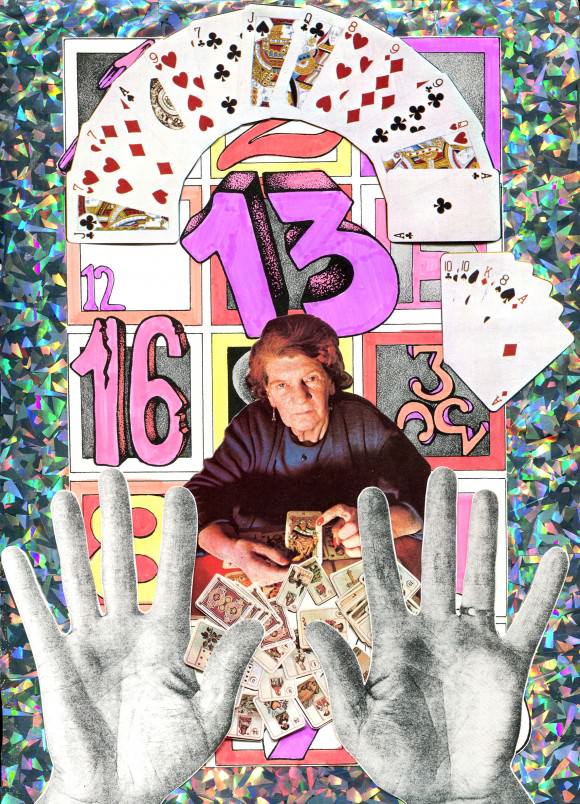 I have always wanted to see the future. When I was little my friends and I would sit in lava-lamp-lit circles, join hands, and try to conjure visions of what our lives would be like when we were older. In middle school, I bought a book on palm-reading, and at recess we all tried to analyze the lines on our hands to determine how rich we would become, whether we would ever marry, or what would be for lunch that day in the cafeteria. In high school I began to read my horoscope every day—and I still do. I even mark down my “lucky days” on my calendar; when they come around I feel just a li’l more psyched about everything.

I haven’t managed to become clairvoyant, but I’ve had a lot of those little moments where you feel sort of psychic: Like sometimes I haven’t talked to my mother in months, and then the moment I pick up the phone to call her, it buzzes—and it’s her. Or I’ll download some obscure film that I’ve heard about but that isn’t available on DVD, and the next morning that very movie is on TV. These are small, trivial things, but when they happen dozens, or even hundreds, of times you start to wonder if there’s a latent sixth sense lurking somewhere inside you. But if feels stupid to talk about this stuff, doesn’t it? I consider myself more rational than emotional, more reliant on logic than on intuition. And yet fervently believe in the existence of ghosts and our power to communicate with them. I believe in magic.

I mean, listen to what happened to my mom: Before she was even pregnant with my little brother, she had her tarot cards read by a professional psychic. As the psychic turned the cards over, she told my mother she would have a little boy soon, but he who would become very ill in his stomach area (she said this specifically), but he would ultimately be OK. Well, my mom went on to have my brother, who was diagnosed with kidney cancer when he was three years old, but he lived through it. HOW DO YOU EXPLAIN THAT?! Seriously, how did that fortune-teller know?

I’ve had my fortune read by tarot-card and palm readers, both professional and just friends who’d learned how to look into the future. None of my readings have ever been as amazing as my mom’s baby-boy prophecy—like, duh, of course I’m “at a crossroads in my life” and “going to experience a change soon,” I’m 19—but I still believe in all this stuff.

I’ve been trying to make certain objects into lucky charms for years. I swear to goddess—and Tavi’s going to laugh at this—I got this idea from an episode of Arthur I saw as a child, where Arthur has a lucky pencil that helps him ace tests, win games, and even bring him more confident, aspirational dream sequences where he’s president and shooting aliens. I pick these objects more or less arbitrarily, like a glittery mechanical pencil or a charm-box necklace with dried flowers on it. In middle school and high school I would place them my desk during nerve-racking tests and slip them into my pockets when I wanted a tiny boost of mystical backup. They never end up being lucky, and yet I keep trying. It seems to me that my own magical talisman is out there somewhere, I just haven’t found it yet. Or maybe I’ve just watched too much Arthur?

And I l’ve always been obsessed with stories about time travel, from H.G. Wells’s classic The Time Machine to the Victorian romance Somewhere in Time to Hermione Granger’s Time-Turner necklace (damn, didn’t we all reaaally want that?). In a way, my brain is always in time-travel mode. I’ve never been one to live in the now. I’m a determined planner. I like being in control over situations I’m in; spontaneity is not that appealing to me. I like to learn as much as I can about stuff that’s going to happen in the future; it’s comforting to me. So I’m always busying imagining stuff like what I’m going to do next summer, or what New York City will be like in 2053. When someone tells me that they’ve never wondered when and how they’ll die, I assume they’re lying. Doesn’t everyone want to know where they’ll be living when they’re old? Or how, and how much, they’ll have changed? Don’t you want to know how you’re going to die?!?

It makes me anxious that I can’t predict everything that will happen to me. I like to imagine that I have control of my destiny, but I know that I don’t, and I don’t like that. No matter how carefully I plan my life, there are a million little variables that could happen at any moment to spoil my plans completely, and I’ll never know how any decision I make now might turn out in the future. That’s why it’s such a relief to read my horoscope. Oh, Thursday will be my lucky day? Great, that’s when I will turn in that paper. I should avoid Sagittariuses today? Phew, glad I dodged that bullet. Tarot cards, crystal balls, astrology—all that stuff is makes me feel a little more in control of my fate.

I’ve always hated the phrase “everything happens for a reason,” because some things don’t happen for a good reason—some things are just shitty. If something bad happens to me (my dog dies, this dude I like shoots me down), having someone say “everything happens for a reason” doesn’t help me, because I don’t know this ultimate “reason” here and now. But fortune-telling can help me see those “reasons”—getting to know what will happen in the future helps me figure out why certain things might be happening in the present. For example: If you didn’t get that job you’ve been pining for, maybe that’s because there’s a greater gig waiting for you at a different place. Or if the cute classmate you’re hoping asks you to the school dance does not ask you, maybe it’s because you’re going to have a way better time going with your best friends than with a date. In a way, fortune-telling tells us more about the present than it does about the future. (But then if you change your actions in the present based on your fortune telling findings, you will ultimately change the future that was told to you in the first place! Arrghgh)

This is why I continue to scour the internet for horoscopes from dozens of different sources and compare them. They’re almost always different, but even when they contradict one another I just decide to trust the ones that work in my favor. It doesn’t really matter, ultimately, if this stuff is “real” or a hoax; it brings me an odd sense of security, and to me that’s magic. I like knowing that any time I’m unsure, I can always turn to the cards, the horoscopes, and the palm-readers for assurance and guidance—if they won’t tell me exactly where I’ll be in 2053 (hopefully I’m a chill old woman riding a hoverboard wheelchair). ♦