Suzanna had always seemed untouchable—until the day she needed us. 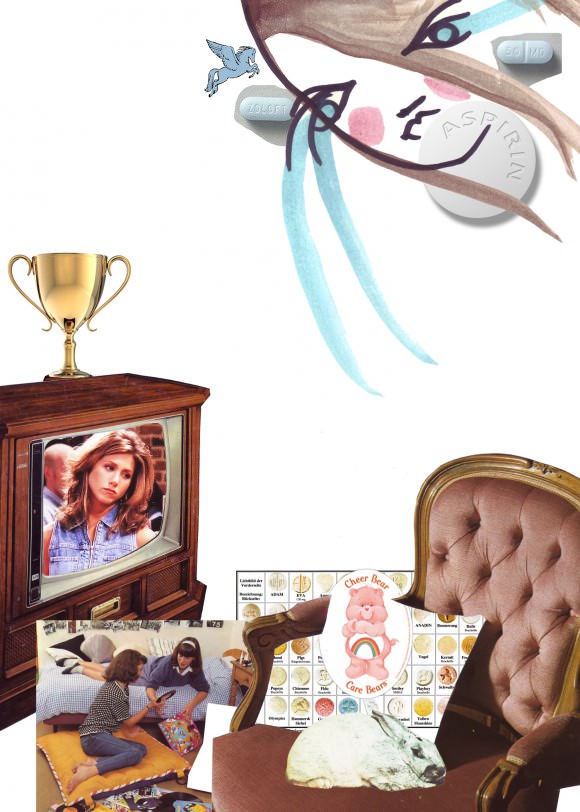 The Sunday morning that Tara called, I had a dream within a dream. The kind where you dream that you wake up and open your eyes and it’s pouring rain and then you wake up to your phone ringing and it’s noon and the sun is shining overhead. The tree branches outside my window swung silently, like seaweed swaying back and forth underwater. I answered my phone and Tara told me that Suzanna may have overdosed on something and we had to go see her.

Suzanna was one of those girls I had known forever. But while I grew up with a nanny watching me from the kitchen window, on alert in case I stepped on a thorn or needed a snack, at Suzanna’s we ate three hot dogs apiece and left the sprinkler on all afternoon, watching the rainbows caught in the rising and falling water. Her mother came and went from her job at the hospital, always greeting me when she got home: “Hallo Maria, kleines mäuschen.” My mother hated me going there but I would fuss and she would drop me off, biting her lip, at that house with the dark velvet furniture and heavy brass lamps. There was no sign that a kid lived there except in Suzanna’s room, and in my mind she was a little princess, living at the top of this big damp house. In the car home I wondered what she did when I left—did she talk to her pet rabbit (soon to be run over by a mysterious neighbor) or swim alone in their greenish pool? By seventh grade I had other friends, and Suzanna had dyed her hair a purple-orange shade that seemed sophisticated and mischievous.

Now, of course, Suzanna was never alone. Her parties attracted the worst losers at school, and they were always hanging around the front yard, smoking cigarettes and drinking cheap beer. I had been to a couple of them and she seemed glad to see me there. I first met Tara crying in the bathroom at one of those parties. It was winter and she was wearing a puffy parka because the heat wasn’t on. She said that Suzanna had gone behind her back and eaten some pill or other and was lying on the couch like a dead man. I wiped Tara’s leaky eyeliner off her cheeks and told her that Suzanna had always seemed untouchable to me. Tara nodded, and by the time we came out Suzanna was rallying for a game of beer pong.

It was almost spring that Sunday when I got Tara’s call, and warmer than it should have been.

“Well, you should have thought of that before you called me, because now we’re going.” I snapped my phone shut, dodged my mother and ran through backyards to get to Montgomery Avenue. Tara was waiting on the main street, at the corner by the park, in jean shorts and a blue hoodie that her covered her thin hair. I waved and she looked away. When traffic cleared I ran across. She shook her head at me.

“You freaked me out,” she said.

“What do you mean? You’re the one who called me.” I started walking down Montgomery toward Suzanna’s house.

“But…it wasn’t real until you said we were going,” Tara said. She pulled her phone out of her pocket and started tapping messages to people who had gone to the party last night. For once, Tara had stayed in. Her family had gone to the movies together and it had pissed Suzanna off.

We finally reached the synagogue at the end of Suzanna’s street and turned off the main road. I picked up my pace and Tara trotted quietly behind me. Soon the house loomed in front of us, its stucco cracking under the bulk of its own tired weight, yellowed with age.

“OK.” Neither of us moved. “You get calls about Suzanna all the time, right?”

Tara nodded but wrung her hands. I turned the knob and let us in.

The place smelled like a mildew and stale food. The tapestries hanging in the hall seemed to hold in the damp and keep the air sticky. The orange shag carpet was worn down to the hardwood floor.

“Suzanna?” I called. I started up the stairs. “Suzanna?” Tara came up behind me.

The stairs flexed as we made our way up. Tara knocked on Suzanna’s bedroom door.

“Suzanna?” I called again. Tara opened the door to reveal remnants of a childhood I had almost forgotten: the wooden bed covered in Care Bears stickers, the flower curtains, the line of trophies from Junior Olympics. The floor was scattered with empty beer bottles and two crumpled cigarettes packs.

Tara froze in the doorway while I went over to the bed and pulled the sheet away. There Suzanna lay, on her side, her eyes half-closed. She looked drowned. I leaned closer until I could feel her breath and see her chest move. I gestured to Tara to come over. She sat on the edge of the bed and muttered Suzanna’s name. I gave Suzanna a good shake. Her eyes flickered, and for a second I thought she was dead. Then I saw that the unnatural blue of her irises wasn’t the film of death like in some Edgar Allan Poe story—she was just wearing those fake contacts of hers. They matched the velour tracksuit that she kept wearing even though the elbows were worn through. Her tank top said Princess.

“Hey, are you OK?” I asked her. Her eyes closed and I shook her again. She opened them and tried to focus on me.

“Maria?” she said. She looked confused. Then she looked past me and saw Tara. Some understanding flickered across her forehead. “What are you two doing—?” Tara looked afraid. Suzanna’s eyes closed again. Tara and I lowered ourselves to the floor and sat leaning against the bed. I took two cigarettes out of a squashed pack and handed them to Tara. She lit the ends and gave one back, and we inhaled more deeply than we really meant to.

“So she’s OK?” she said, her fingers poised over the her phone, ready to send out the word.

“I think so?” I wondered if Suzanna’s mother had seen her and then gone to work. “It seems like she’s sleeping it off.” I got up and went over to the closet. A lot of the clothes still had the tags on, cheap-looking but expensive. I pulled out a tiny blue skirt and held it up to my body, trying to imagine I was a girl who would wear such a thing.

“What are you doing?” Tara said.

“I don’t know, waiting?” I dragged on the cigarette and set it down in the ashtray. I wiggled the skirt on then pulled my shorts off from underneath. I went over the to mirror and peered at my image, noticing how the skirt clung to my thighs. “What do you think?”

“I think it’s great,” Tara said. I turned to face her. “No, I really do.” She got up and went to the closet, where she found a short pink dress. She turned away from me to change. I picked up a brush from Suzanna’s bureau and ran it through my hair. Tara zipped up and turned back around. The dress hugged her ribs tight.

“Where does she get all this stuff?” I asked, picking up my cigarette.

“You don’t want to know,” said Tara, gazing at herself in the mirror. She grabbed her bag and pulled me onto the floor. “You need makeup,” she said.

As she did my eyes I asked if this was what she and Suzanna did together. “Sometimes,” she said with a half-smile. She snuck another glance at the mirror. “I really look so much prettier with a little makeup, don’t you think? That’s what she says.” I picked out shoes for both of us. Mine fit perfectly, but Tara’s feet swam in hers. We stood in front of the mirror together, side by side.

“Not bad,” Tara said with a laugh. In the mirror we saw Suzanna violently twitch in the bed behind us. Her eyes were wide open and staring at us.