Midnight Plus One: “Modern Witch”

A free song and a conversation about curiosity with painter and musician Casey Cook. 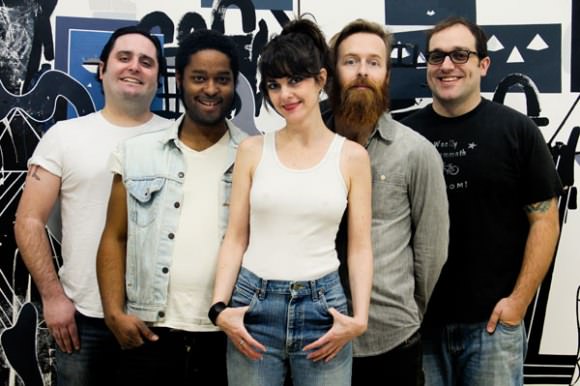 Casey Cook ditched New York City seven years ago for “the beach and the mountains and the folklore of the South” that Carrboro, North Carolina offered, with the intention of only staying for a few months. Instead of merely getting closer to those magical muses that drew her in, Casey internalized them; now, she bewitches the Chapel Hill area with the “mystical post punk,” as a friend of hers describes it, that her band Midnight Plus One plays on tracks like “Modern Witch,” which we’re beyond excited to be premiering today as a free download just for you Rookies.

Casey began her artistic career as a painter, but that changed when a singer/songwriter sharing her studio space started auditioning potential drummers—very unsuccessfully. “Finally I just said that I would play if he taught me how,” she says. “I never even thought about playing drums before the day I started.” She took on double-duty as drummer and vocalist for Americans in France; in 2011, she became frontwoman for Midnight Plus One.

Casey took the time to tell me all about the different artistic roles she assumes and how important having fun is to staying motivated in all of them.—Brittany Spanos

BRITTANY: How did you join Midnight Plus One?

CASEY COOK: I knew the band was looking for a singer and that they were interested in a female voice to contrast with the music. I played around with vocals on one of their finished songs. It all started as an art project, a collaboration, and it just worked. We wanted to capture that beginning moment of everyone coming together, which become our first record.

Having been a drummer in Americans in France, how was the transition to becoming a frontwoman in this band?

I don’t know that I could be a frontwoman without having been a drummer first. I love the freedom I have to move around. I got really nervous before shows when I was drumming. Now the freedom excites me and I have gratitude for it. Instead of being locked into a beat, I can get inside the song as a whole.

How do you carry yourself as a singer versus being a drummer?

More confidence, fewer nerves. More all encompassing [as a singer] vs. driving a beat [as a drummer]. Perhaps this comes from experience, but I imagine that using my voice as an instrument to say the words that I want to say is empowering. No mistakes, no worries if something sounds ugly — as long as it’s honest.

Can you expand on the art project idea from earlier? What did that idea mean to all of you?

Thinking of this as an art project took away preconceived ideas of traditional band roles. We wanted to capture something that existed in the present moment without thinking about future practices or shows. It allowed us to stay curious. It allowed me to try things I had never done before.

You’re also a visual artist. What has been the crossover between your painting and your music?

My paintings have become more playful in their movement since I started making music. Lyrics often become painting titles or appear as block letters on painting surfaces. I also use [my] old film/video footage to make music videos. Both remain separate extensions of my art-making practice [though]. I work alone too long painting in the studio and it makes me want to collaborate and watch what happens when an idea stumbles through several brains: a band.

What’s been the biggest influence on your art in all its mediums?

Desire. All shapes and sizes of desire. In my painting, I refer to this as geometric desire. It spans from a desire to right a wrong, investigate an unknown, to the desire to overcome, the physical desire to be with someone else, to be alone, to be profoundly moved by a story or a landscape. “Knives on the Beach” is both a song and a painting title. I like the idea of a jagged knife blade in the sand, a kind of beautiful danger. I also revisited the [Roman] Polanski film, Knife in the Water while writing the lyrics.

How do you carry the honesty you convey in your voice to your work as a painter?

What inspires me is usually something that comes from a real experience, whether my own or otherwise. It would be pointless for me to make something that I didn’t believe in, it would be hard for me to get behind it, to sing about it. I figure it out as I go and try to do my best. I would never put something out in the world that I wasn’t sincere about—I might not always like it or understand it, but it comes from a real place.

Also, it should be fun! Painting can be a battle, a problem I create and then attempt to solve with color or line or shape. Bands as well can battle and get bogged down with ego struggles and miscommunications, but the longer I keep making things, either alone or in collaborations, I remind myself to keep it fun. If it stops being fun it’s time to get curious again. I recently worked with girls at Girls Rock NC and was taken by their fearlessness and excitement towards making music. I love the wide-eyed curiosity, the freshness inherent in exploring something for the first time. ♦