They were as bad as I wanted to be. 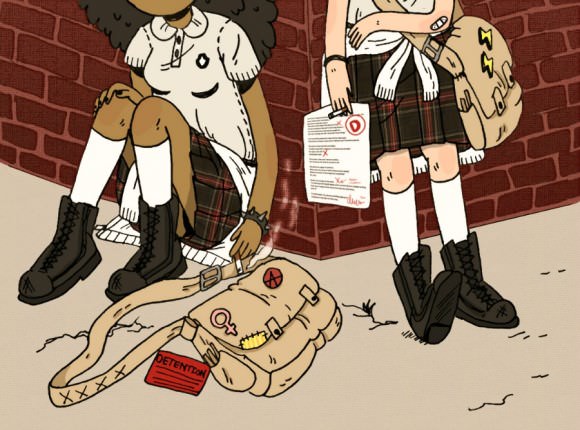 When I was in ninth grade, I got to fulfill a major fantasy of not just myself, but I would guess lots of girls who watch TV and/or read fiction: I was sent to an all-girls boarding school. We were living in Saudi Arabia, where the American schools didn’t offer coursework beyond the ninth grade, so a lot of families sent their teenagers to college-prep schools abroad. I could just picture the halls of ivy and the sprawling green, which I imagined would be the backdrop to a picturesque teen rebellion that I felt must be right around the corner for me.

Can you blame me? I grew up watching ’80s sitcoms like The Facts of Life, a show about four teenage girls living at Eastland, a fictional boarding school. While I probably had the most in common with Tootie Ramsey, the youngest of the girls and the only African-American among them, my favorite character was Jo Polniaczek, an edgy badass who showed up at school on a motorcycle, carjacked the school van to take her friends out partying, and became valedictorian of her class. She was never better than when her tough-guy bad girl locked horns with mean-girl bad girl Blair Warner:

Today I can trace my fascination with boarding-school bad girls back to Jo. It continued with Flirting, an Australian coming-of-age movie starring Thandie Newton and Nicole Kidman. Their characters, Thandiwe and Nicola, were the quintessential boarding-school bad girls (I hope you can tell that to me this kind of bad is good), skipping classes and sneaking boys into their dorms, and they became role models to me—especially Thandiwe, who breaks most of the rules to be with the adorably awkward lad she loves from the boy’s school across the pond. She’s smart, self-assured, funny, and confident. I wanted to be just like her.

Here, watch these two back-to-back scenes, and you’ll see why I was so obsessed with these girls (also watch for Naomi Watts as one of the “good girls”:

In reality I was more like the Naomi Watts character—kind of a goody-two-shoes. My fear of disappointing my parents or reinforcing school administrators’ stereotypes about people of color kept me in line. As I agonized over SAT prep and AP courses in pursuit of admission into my first-choice colleges, I sometimes envied schoolmates who were brave enough (and often privileged enough) to get away with partying with college dudes on the weekends, cutting their uniform skirts into microminis, smoking cloves in the woods, and maintaining full bars in their dorm-room closets. While I didn’t really have an interest in booze or college guys (yet), I yearned to let loose in my own way (if only I knew what that was!). And as excited as I was to enter the glamorous and debaucherous world of boarding school, I was also a bit scared. Boarding schools, I knew from television, housed some of the world’s richest, naughtiest, and snobbiest kids. I wondered if I would ever fit in as a minority and technically an international student. I tried my best to channel Thandiwe, who embraced rather than feared being an outsider, and who acted first and asked for forgiveness later when unfair obstacles got in the way of what really mattered.

When we were choosing where I would go, my parents focused on admissions statistics and the “spiritual values” of each school. I, however, was more concerned with finding a place that fit the boarding-school archetype in my head, the one that had been placed there by Tootie and Thandiwe and so many others. I had been such a well-behaved kid to that point; I wanted to find a place where I could finally let go and explore who I was when I wasn’t necessarily following all the rules imposed on me by my parents. Alas, my school visits were nothing like Sally Draper’s—I didn’t get drunk or high or invite boys over. The schools’ student ambassadors were on their best behavior, so I never saw so much as a cigarette during my visits. It was hard to discern which institution would give me the best opportunity to become acquainted with the more adventurous version of myself that I was sure was somewhere in me.

That changed when I finally picked a school and became a student. I chose a school that no one else I or my parents knew would be attending, the better to reinvent myself as a “bad girl.” It was an Episcopalian school in the mid-Atlantic that had been opened by bluestocking feminists in the 1800s known for its rigorous curriculum and friendly spirit. And I encountered my share of bad girls: girls who ignored our curfew, who would sneak out of the dorms at midnight to take horses out of the stables and go on night rides, who skinny-dipped in the pool during off-hours and stayed out to watch the sun come up. I longed to follow their lead, but it turns out that I just wasn’t a bad girl at heart. I think the “worst” thing I ever did was get my roommate to forge my name on the breakfast sign-up sheet each day so I could sleep in. (I still smile when I think about that.) I was too concerned about getting into a good college, too afraid to incur the wrath of the dreaded disciplinary committee, to do anything worse. One thing I did not foresee about boarding school was just how many rules there were. If I didn’t wake up on time, make my bed, empty my trash, attend formal meals, show up for mandatory sports practice, or dress like a clone in my preppy schoolgirl uniform, I could expect to lose privileges and miss out on my beloved outings to vintage stores or the movies on the weekend. But when I remember the stomach-churning anxiety I went through any time I broke even the tiniest of school rules, I regret not taking more risks back then, when the odds for youthful redemption were still in my favor.

Which isn’t to say that I was a shrinking violet. I found little ways here and there to express my independence and to stand up to authority, mostly by channeling my righteous angst into activism. I spoke up against injustice on campus and in the world in class and in the school paper and organized students around issues like racism and human rights. I don’t regret any of that.

You’ll be happy to learn that I loosened up a lot after college. I still wouldn’t call myself a “bad girl.” But I’m a lot better at speaking my mind, being confrontational, being spontaneous, and enjoying myself. I break a lot more rules than I did back then, because I understand the consequences better. And even though I will never match their outlaw glory, I know I owe it all to those brave and beautiful bad girls from boarding school. ♦