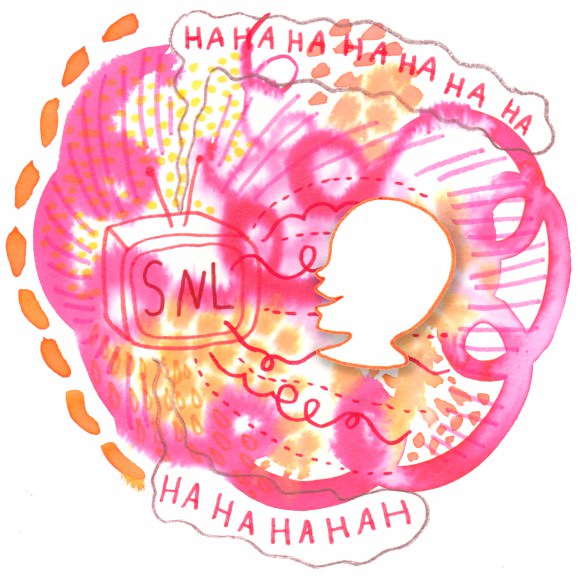 In seventh grade, I had an after-school ritual: I’d come home to an empty house, make a giant bowl of popcorn and a glass of chocolate milk, and watch two episodes of The Kids in the Hall on Comedy Central back-to-back before my mother got home. The show was the weirdest, funniest thing I had ever seen, and it had the added bonus of feeling dangerous to watch, because some of the ideas being addressed—sexuality, drag, violence, and general absurdity—weren’t the kinds of jokes I was used to hearing on typical sitcoms. I had just kind of stumbled across the show on my own, and I was immediately hooked. It was like finding a secret society that I desperately wanted to belong to.

I spent most of my tween and teen years nerding out over sketch shows like KITH, In Living Color (particularly the hilarious work of Kim Wayans), The State, and Saturday Night Live. I taped episodes of SNL and watched them over and over again; my friends and I must have seen the 1996 Jim Carrey SNL episode at least 9,000 times. Since we were 15 and sleep-deprived every time we put it on (usually at a sleepover at 4 AM), the combination of Jim Carrey and Will Ferrell killed us every single time.

Silly stuff like that made me laugh a lot, but I was also attracted to how sketch comedy treated rougher topics. In my family, we deal with tough things by making jokes, which seemed like the standard in professional comedy as well. Breakups, “scared straight” tactics, or alcoholism, and all kinds of dark subjects were taken to such a ridiculous level that it was impossible not to laugh at them. For me, it was cathartic to see other people handling things the way family did—by laughing. This was major for me, because it told me that it was OK to deal with my fears by trying to make them funny, and it also showed me that there was an entire art form based on my natural instincts. I began writing sketches for school projects, keeping jokes in notebooks, and was always trying out characters on family members, just to figure out what my “comedic voice” was. Sketch comedy was a revelation; it changed how I looked at the world and massively influenced my creativity.

The thing that really drew me to sketch, though, was that it seemed to be created by a team—a collective of weirdos who all had something to say or some strange way to say it. These people had found kindred souls to create with, and as someone who always felt a little weird, that was terribly appealing to me. They were performing live, unlike actors in funny movies, which seemed dangerous and exciting, but they were also working together and supporting one another, so there was a safety net. This was an irresistible combination.

I was always interested in how sketch comedy was written, especially the weird sketches that didn’t seem to have obvious punch lines but touched at something darker, like “Family Dinner,” one of my favorite SNL sketches of all time. It’s an incredibly macabre sketch about a family whose clearly hate one another, but it rings true because it’s an exaggerated version of so many angsty dinners I sat through as a teen. It’s also just perfectly timed and every actor in the scene is fantastic.

It’s both sinister and silly, like all my favorite comedy. (For the ultimate in sinister/absurd comedy, I suggest the brilliant League of Gentlemen).

There was a sketch comedy group at my college, and even though I was super nervous about performing in front of people, I auditioned and actually made the troupe. My social anxiety, which has always been an issue for me, seemed to melt away in comedy meetings, where we went over sketches and threw around ideas, because I had to speak up if I disagreed with something, or be brave enough to pitch something to people I respected and was intimidated by.

I also had to get onstage in front of hundreds of people and perform, which was a nightmare up until two seconds before I actually went out in front of the lights and the audience. My stomach was always sick, and I had to jump up and down backstage to shake off the creepy-crawly nervous feeling that panic usually sends through my system. When I was onstage, I was miraculously able to forget myself. I used the wigs, props, and costumes to become some nutty character, which freed me from my typical fears. It helped, I think, that most of my characters were smiling on the outside but somewhat darker on the inside (my influences came through pretty strong)—my only goal was to be bizarre enough to make people laugh.

As incredible as it was to hear the laughter in the audience bouncing back to me when I performed, my favorite part of the entire experience was being backstage, watching a sketch I wasn’t performing in, and hearing the audience laugh when other people delivered jokes I had written. It made me feel understood by my peers, I feeling I rarely get in regular conversation.

Doing sketch comedy was completely dreamy, but I stopped after college to focus more on writing, which was always my favorite part anyway. I do miss performing, and I’m thankful that it helped me become a braver person.

The Kids in the Hall streams on Netflix, SNL is on Hulu, and countless scenes and skits from other comedy shows are all over YouTube. I hope there’s a 13-year-old girl out there somewhere watching them all and falling madly in love with the endless universe of laughter and creativity that’s unfolding before her. ♦