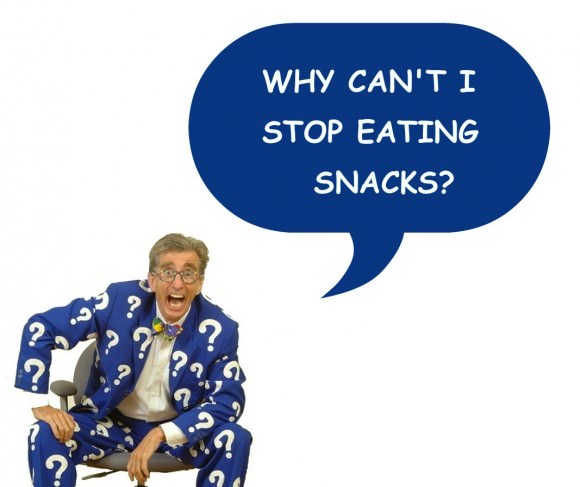 I genuinely feel better and happier about myself when I’m thinner, but I have to strictly monitor my diet and cut out all unhealthy foods to get there. But now it’s gotten to the point where I feel SO GUILTY whenever I eat anything unhealthy, and I can’t stop thinking about it. Then I feel guilty because I’m not practicing body love/positivity/acceptance, which I say I support. When I look good I feel good, but looking good is always a result of constantly having to deprive myself of things I love. I don’t know how to un-correlate my health and happiness so my sanity remains intact. —Mads

This is a super-common problem—kudos for recognizing that the cycle you’re in isn’t a good place to be. While eating healthy is totally great, strictly monitoring every single thing you put in your mouth isn’t. Dieting can be a slippery slope into disordered eating, which we obviously want to avoid.

First, ask yourself why you’re happier when you’re thinner. Where do you get the idea that your worth is tied to your size? Are your friends or parents participating in diet talk or body shaming? If so, shift the conversation when that sort of language is used. Try changing the subject, and if it keeps happening, it may be time for a convo about the way they talk to and about you and how it makes you feel.

Instead of going on a food diet, try going on a media diet! Cut out trashy TV, tabloids, and womens’ mags. I know that might sound unnecessary, but you’ll be surprised how much your body image can improve after a few months of not internalizing messages about “good” and “bad” bodies from TMZ or Us Weekly.

And don’t beat yourself up for eating junk food every once in a while! Food deprivation combined with guilt and shame is usually a recipe for yo-yo dieting and binge eating. You will probably need to take baby steps to be able to eat what you want without guilt. First, avoid labeling foods as “healthy” or “unhealthy.” Sure, some foods have less nutrients than others, but all foods have a place in our lives, and too much of anything—even, like, broccoli—is going to have a bad effect on your health. Try having one small snack per day of something that you currently consider “unhealthy” (if even that’s too much, go slower) and practice telling yourself that you aren’t doing anything “wrong” or “bad”—after all, your emotional health is part of your health, and driving yourself crazy is actually bad for you! If you start to feel guilty feelings creep in, talk back to them. Tell them that you know what they’re up to, and it’s not good for you. Then re-focus on how great those french fries taste, or how much fun you have bonding with your friends while eating Twizzlers and watching movies. You’ll probably have to practice this for at least a few weeks before you feel a natural shift in your thoughts, but just stick with it for a while!

If you still can’t kick the habit of deprivation and feelings of guilt, it’s time to talk to a school counselor or a therapist. It can take a long time and a lot of practice to develop healthy habits, so having someone to talk to can help a lot as you figure it out. —Gabi

I find myself stressing out about not being different enough, but it’s always triggered by something stupid: deciding to grow out my bangs, finding out someone else likes my favorite band, that kind of thing. I know I shouldn’t place so much emphasis on external things to define who I am or distinguish myself from other people, but as much as I try to convince myself that those things don’t matter, I can’t help worrying that I’m going to end up being like everyone else. How can I determine my identity without depending so much on stuff? —Virginia, 16

First of all, Virginia, I just want to point out that everybody is different. Yeah, you might not be able to tell that from the majority of people’s clothes, hair, and musical tastes (because certain bands and styles will always be popular), but deep down inside, people are weirder than you think. So there’s no need to panic over being like everyone else, because there is no way you ever could be! You are your own unique person with your own ideas, feelings, and behaviors, no matter who your favorite band is.

I totally get being protective of your hairstyle or your iTunes library and the things that you like, but there’s way more to your identity than things. Being different or going against the status quo is less about what bands you listen to and more about how you interact with the world at large. Like most completely rad people, I determine someone’s personality based on how they treat others, their outlook on life, and/or their sense of humor—not by their Facebook likes or their wardrobe. Trust me, you’re going to eventually meet some people who look like BFF material on paper, and then—bam!—you find out their personality sucks, or you don’t have anything else in common!

A question to ask yourself: Are you rebelling against the norm because it’s what you really want to do, or because you feel like you are supposed to? There’s no need to stress out about being “different enough”—no one worth knowing cares about that, anyway. Instead of trying to gather things that make you seem “cool,” seek out experiences that make you happy. That’s really the coolest thing you can do. —Hazel

I blush ALL the time, and it reveals things that I don’t want revealed, or it makes me seem really suspicious when I haven’t even done anything wrong! Any tips for keeping my rosy red cheeks on the downlow? –C., 13, NYC

So here’s the bad news, C: Blushing is an involuntary bodily function that serves no purpose other than to quietly bother the shit out of us. When something’s involuntary, you can’t stop it. Great.

But here’s the good news: Even if you can’t stop blushing, you can make things better. We blushers blush when we feel put on the spot, and when we’re embarrassed. As a species we tend to hate having all eyes on us, and we embarrass easily. And then when we feel ourselves starting to blush we get embarrassed about blushing and blush even harder. Life is really not fair. So the first thing you need to do is own it. Say something to your friends like “Ah, I’m blushing now” or “Hahaha aw man, you made me blush!” and laugh. This stops your brain from freaking out about the fact that you’re doing it, and stops the blushing-because-embarrassed-but-now-blushing-harder-because-embarrassed-about-blushing cycle dead in its tracks. I find that once you’ve announced that you’re blushing, people don’t really care, or, way better, they think it’s adorrrrrable, and then you’re not embarrassed about it anymore. Another technique you could try is a mental-disassociation exercise I learned from a friend: When someone is putting you on the spot, as you feel yourself starting to get embarrassed, try to separate yourself from the situation, almost as if you’re looking down on a tiny version of yourself from a great height. Say to yourself: Why should this be embarrassing? I’m just a tiny little person on this giant world in this massive universe, and this doesn’t matter one iota. It has totally worked for me.

The last tool I have to offer you is hope. As you get a bit older, you will probably sort of naturally stop being embarrassed about as much stuff. And when you’ve finally reached the point where you rarely blush anymore, pay it forward by resolving never to be that person who gleefully points out when others are blushing, because those pointer-outer people are the worst; may a thousand blushes fall upon their cheeks when they’re talking to their crushes! —Krista

Do my girlfriend and I have to take STD/STI tests before we have sex if we are both virgins? —S.

*Parachutes in* Hello there, S.! Congrats on your upcoming debut—I assume you’ve checked out our tag on the subject? Different people have different definitions of virginity, so I’m going to consider the entire STI risk rainbow here.

If neither you nor your girlfriend has previously had contact with anyone’s downstairs but your own, you can skip the clinic visit. Now on to other scenarios:

If you haven’t had oral sex but you have grinded naked on another human, there are other possibilities. If you have a vagina and are having symptoms like increased discharge that burns or itches, or an intense fishy smell, you might have bacterial vaginosis (BV) or a yeast infection. These are not necessarily STIs, but they can be transmitted sexually from genitals to genitals There are also three STIs that can be spread with just skin-to-skin contact: Molluscum contagiosum, herpes, and HPV. Let’s break those down.

If you’re disappointed because you thought you were going to get to go on an awesome clinic field trip with your beloved and now you don’t have a reason to because you’ve never seen anyone’s junk but your own, I have some good news! There’s still a reason to make the trip: to get vaccinated against HPV! Do it before any genital contact has gone down, because the vaccine can only prevent the strains of HPV you haven’t been exposed to yet. No exposure, all prevention. Sweet. Even if you both check out STI-less, you might want to use a barrier like a condom or dam anyway, to lessen the risk of triggering a bacterial infection if you have a vagina, to help with premature ejaculation if you have a penis, or for a lot of other great reasons.

I want to commend you both on being super awesome and engaged with your healthcare—it means you really care about each other. Good luck! —Lola ♦

Got a question that you want a total stranger with no professional advice-giving qualifications to weigh in on? Send it to [email protected]. Please include your NAME, nickname, or first initial, plus your AGE and your CITY.