Whose house is she haunting?

Friday Playlist: Bump in the Night 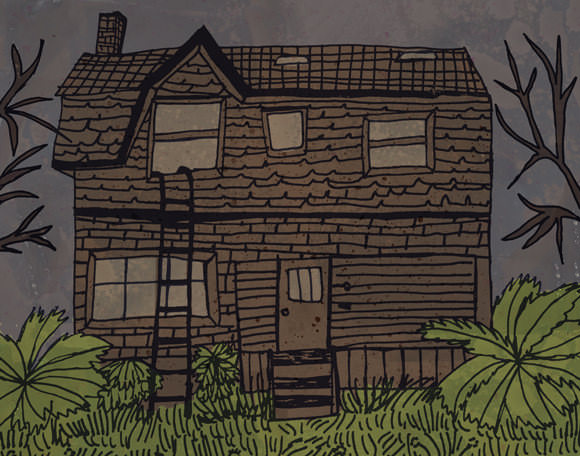 We had a plastic bottle of vodka and no plan. Then I remembered the abandoned house.

“I know where we can go,” I said, and I led Lucy and Beth down Montgomery Avenue until we saw it: the oldest house on our stretch of the Main Line, a cluster of well-manicured suburbs near Philadelphia. We stood in front of the house as cars swept by us, in a rush to return to the tapered driveways leading to their sprawling, blanched homes. A thick web of vines and bushes hid much of the property from the street, but below the sound of traffic there was a persistent rustling of invisible animals running around in all that green. In sixth grade we had taken a bus tour of historical buildings: There was the General Wayne Inn, where Edgar Allen Poe had stayed (but which we knew as the place some guy got shot for the insurance money), there were the mills that had crumbled into the rainwater-swelled creek, and there was this house. No one lived there then, and no one had moved in since, though there were signs of some sort of futile restoration. A truck with flat tires was parked in the driveway. There was a mower in the backyard, but the grass was so long it looked like a hidden prairie. The door was locked, but the second floor window was open, so we grabbed a nearby ladder. I got picked to go first.

Last time I was here my mom and I were on our way home from seeing Pocahontas and we had to take a detour to retrieve my sister. She had just broken up with her boyfriend and was falling down drunk. His family owned this dilapidated colonial, and their friends used to hang out in it after hours. She was 17, like me now. I was eight, with sweat dripping from the backs of my knees. She was taking an art class at the community college and had her canvases set up on the covered stone terrace. She was always standing out there chain-smoking and signing huge paintings with a loopy A. Our mother felt bad for the boyfriend. “Maria,” she said to me, “your sister just has trouble opening up.” That was the way she put it. Once I saw my sister kiss him with her eyes open and I felt strange.

“I’ll text the guys,” Lucy said, taking a hand off the ladder to whip out her phone.

“Jesus, Luce, hold on to it,” I said. I was already six feet off the ground. It was dusk and the sky was the color of orange soda. When I got to the top I pulled the windowpane up higher and climbed in. Luc would make it but Beth might not.

The room was dim and empty. A pattern of wilted brown and yellow flowers covered one wall, and another wall was missing completely; only the beams were left and you could see the toilet in the next room. The ladder squeaked behind me and Beth’s curly head appeared.

“Help me, Maria?” She reached out a hand. Some of the guys teased her about having baby hands. She had chubby fingers and all her rings were too small so you really noticed it. Lucy and I never teased her though. We had been sworn to secrecy. She was on a fruit-only diet. This meant sometimes she had to poop two to three times a day. Sometimes she skipped lunch so she didn’t have to be around our sandwiches. I pulled Beth up until she had one leg on the ground. She hopped off the ledge and pulled her shorts down over her thighs.

“She’s got the bottle.” I leaned out the window. Lucy was still at the bottom.

“Here, catch!” She thrust the bottle in front of her like she was going to throw it and then pulled it back again.

“Nice, I almost fell out the window,” I said. Lucy laughed.

“Don’t worry, I think this stuff is indestructible.” She put the bottle under one arm and climbed up to join us. It must have been easier for my sister. I bet her boyfriend had an extra key and they just walked right in. I tried to imagine that summer from her perspective. Seven, eight hours of babysitting me and then freedom in the form of this minor historical site. My parents wouldn’t let her have kids over while she was taking care of me, and she mostly respected that. Sometimes a long-legged friend or two sat on the porch with us while she painted, but they mostly stayed away, especially the boyfriend. He came to pick her up after dinner in his car. The one time he came over he told me about how there are fires that go on ravaging woods and jungles, but that people don’t even know about. It’s kind of like if a tree falls and no one hears it, he said, but way more destructive. I tried to imagine this really happening, but my head was filled with cartoons. My sister never told me to turn off the TV.

I would watch her, her hair up and one overall strap unbuttoned, a cigarette dangling from her lip, standing in her sneakers and considering yesterday’s work, while I picked at the dried colors on the palette and ate my toast in a fog of paint thinner. All my friends had day camp, but my parents were saving money, my dad said. The promise of a week in Cape Code come August seemed forever away, so I sat on the porch and watched the neighborhood cats slink into their driveways after a night on the prowl, elusive and nasty to little girls. My sister worked beside me, her arm waving color onto the tight cloth. Even after she signed a canvas and called it complete, she would come back again, dabbing, frowning. She was the most sophisticated person I’d ever known. Around one o’clock she would remember my lunch and boil me a hot dog. She sat next to me in the kitchen and ate lettuce smothered in ranch dressing and drank a Diet Pepsi.