The screenwriter and star of Frances Ha talks to us about making movies, the joys of collaboration, and the perils of writing about your friends. 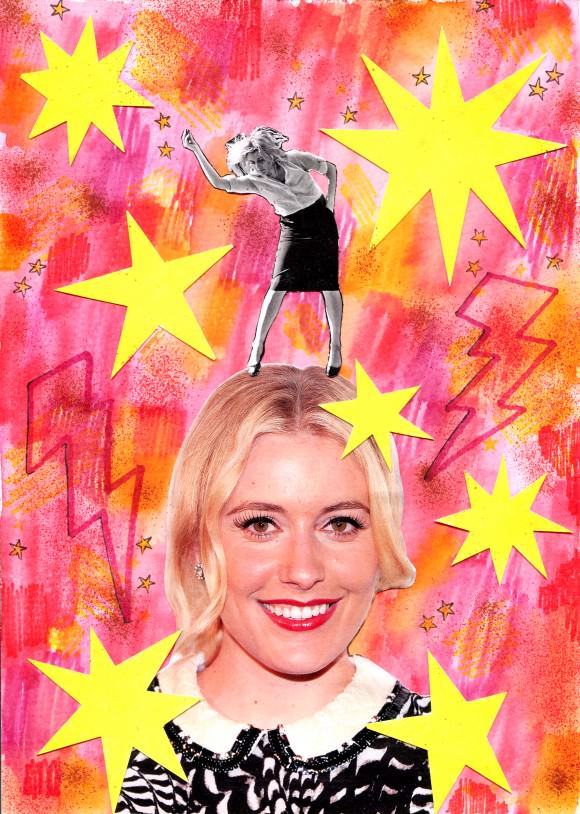 I’d been trying to avoid movies for a long time when I saw Frances Ha. I’d gone back to that safe, emotional-commitment-less space of watching Bob’s Burgers all day, and I was in no mood to be moved and inspired and have the FIRE OF MY LIFE REIGNITED. Well, reignite it did! After this lovely movie, I walked outside and everything looked nicer than it had before, and I felt likeI could move a little more confidently and that no matter what happened, it would be on some level hilarious, and on every level OK.

Greta Gerwig starred in and co-wrote the film with its director and her real-life partner, Noah Baumbach (The Squid and the Whale, Greenberg). She’s also worked with Whit Stillman and Woody Allen, but it was truly special to get to see her in something where her own voice would come through. (Plus you KNOW I am all over a pretty, black-and-white comedy about female friendship.) She is so wonderful in it, perfectly cringe-inducing in Frances’s many embarrassing moments, and utterly captivating the whole way through. When we spoke a few weeks ago for this interview, she was totally captivating and not at all cringe-inducing. Enjoy!

Tavi: I’m so excited about this—thank you for doing it.

I love the movie so much; I guess we’ll just launch right in. So my friend went to a screening where there was a Q&A, and she said people kept asking you how influenced you were by Girls and you had to be like, “I wrote this first!” Which means that when you wrote it, there was probably less space for a female character like Frances to be so flawed. Why did you choose to write this kind of character?

Well, this sounds incredibly douchey, but I don’t feel like I ever choose to write something. I started writing, and this is the character that came out. I wrote a list of ideas and moments, and the thing that really seemed to lock into who the character was didn’t even end up in the movie! It was a scene I wrote that, as soon as I showed it to Noah, we felt like, Oh, that’s who she is! It was a scene where Frances runs into an old dance teacher/manager–type person, and she helps her carry [the teacher’s] groceries home. But instead of leaving, Frances stays for hours and eats a portion of the groceries that she just helped carry, then she inadvertently insults her old mentor and is kind of sincere and sweet but also a complete wrecking ball. It didn’t end up having a place in the movie, but it felt like we’d tapped into who she was. Then it’s just about following what seems to be alive in your writing, as opposed to deciding something and then doing it. I feel like I have to let it come to me.

What did you learn about friendship by making Frances Ha?

It was kind of a complicated process for me. I love the movie, and I loved it as a piece of writing and I love the acting in it. I think of it as this complete love letter to that time in life. But I didn’t have a perfectly seamless experience with my own friends, with their reaction to it. They’ve been very supportive and lovely about it, but it didn’t start there. I also went about it really badly—I think I kind of blindsided them with this idea that I was making something that was about female friendship in a way, and the thing with using autobiographical stuff is that once you start writing it, it becomes absorbed into the world of fiction, so that you no longer think about it as related to other people who are actually alive at all—you think of it as belonging to this character that you made up, and then there’s other stuff that you make up, and it all gets thrown into one soup whose ingredients I couldn’t even tell you. But the experience of someone [else] reading the script is that they read it and they’re like, “You fucking bitch—it didn’t happen that way!”

And they’re right, it didn’t happen that way—because this is a movie, you know? Things are made up! But there’s enough stuff in it from [real] life that isn’t made up. I might use a phrase or a moment that really happened, but then it grows into something else. As a writer, you know, you never can really get permission from people. But I don’t feel totally 100 percent like I’m allowed to [write about real people] just because I’m an artist and a writer and “fuck all y’all”—but that’s what people do! I feel kind of bad about it. But I’m learning how to be better at it.

It was kind of an odd experience, because the shooting of it was so idyllic, and I loved making it, and it was, like, the ultimate fulfillment of what I want to do as a writer and an actress, and it felt so…good; but the actual life that was going on alongside it was kind of a mess. So I think I learned about—and hopefully in the future I’ll be better about—other people’s feelings and sensitivities and the way they’ll perceive something, and about letting people in earlier.

I mean, luckily I’ll never write another movie about this particular subject again, but I’ll probably write something else that I’ll need to have some conversations about with people. The whole thing made me feel like I was an undercover reporter or something—like, it made people feel exposed, because they thought we were all just living, and then I took some of it and made it into something.

I think everyone who makes things probably has to deal with this in some form or another.

Yeah. It’s interesting, too, because I’m an incredible pushover. I’m a people pleaser by nature—which is the actress part of me, I think, and the part of me that wants approval. And then there’s another part of me that doesn’t want approval—if you’re a writer I think people know you’re [gathering material] all the time, and that becomes part of how people experience you. They [see you as someone] who does this and who doesn’t really care how they feel about it. In a way that would be easier; sometimes I wish I had a shell of certainty around me that would let me say, “I don’t give a shit.” But that’s not who I am—I do! [Laughs]

I mean, I’ve always wanted to be a person who did just one thing. I’m jealous of actresses who knew that’s what they wanted to do when they were five and pursued it doggedly and went to Juilliard or another fancy, nice place and are totally dedicated to their craft. I always felt like I was somehow less than those people because they seem more artistically pure. I always did it in a more gray area where I was writing and acting and directing and making things.

I took ballet when I was growing up. I loved to dance and I really was very serious about it, but there was a point where I was also taking up tap and jazz and musical theater, and I remember a teacher said to me, “You’re gonna have to pick one at some point, because otherwise you’re not going to be great at any of them. You’ll just be a dabbler.” I was like, Oh my god.

Yikes! What an awful thing to say to a child!

It’s the worst way to talk! But I took it very seriously, and since then I’ve always worried that I’m just a dabbler, not a master at anything. But I can’t change it. So.