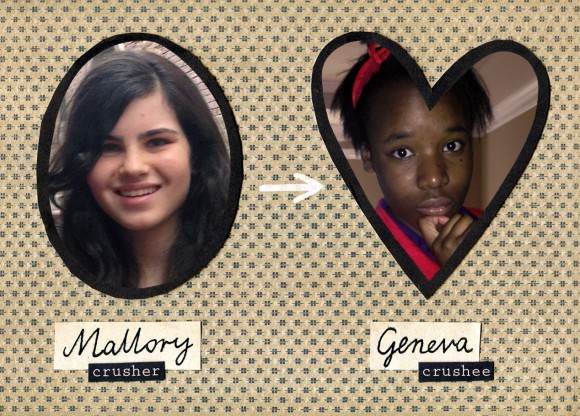 Mallory and Geneva weren’t supposed to be friends. Assigned as locker buddies, they didn’t even like each other at first. But the forces of friend crush are strong, and nothing can stand in the way of these Polaroid-lovin’, vintage wearin’ besties.

We met in sixth grade because we were “locker buddies,” and we were friendly, but that changed in seventh grade—I think I offended her a lot, and we got into fights and ended the year on a semi-bad note. But in eighth grade we bonded over our love for vintage fashion, musicals, Yogli Mogli, Rookie, New York, mint chocolate chip ice cream, Starbucks, Florence + the Machine, Gossip Girl, and Ed Westwick. Now she’s one of my best friends. I can tell her literally anything, and she won’t judge me. I’m pretty strange, but Geva doesn’t mind. Maybe because deep down, she’s just as strange as I am.

She has an amazing sense of style. I find myself texting her pictures of my outfits just to make sure they’re up to par with her standards.

We both are confident that we’ll remain friends way after high school. We even daydream about living in NYC together. I love her so much words can’t describe. I would die without this girl.

ROOKIE: How did you “really offend” Geva when you first met?

MALLORY [crusher]: We didn’t really have anything to say to each other at first, so I told her that she had short eyebrows. Her eyebrows were just, like, short, but it’s OK now.

That was what ended your friendship?! How did you start being friends again?

We just found out that we had a lot in common. We just had similar styles and could just talk to each other and be weird around each other in a way that we couldn’t around our other friends. We talk a lot about random stuff and obsess over things, like really OBSESS. Right now, we’re obsessed with—it’s kind of embarrassing, but Gossip Girl. We also like vintage stuff.

Do you guys go thrifting together? Who finds the better stuff?

I find a lot of stuff for her. I find more stuff for Geva than she does for herself!

How do you determine whether something is more your style or more her style?

Her style is more like a preppy, classic style and mine is more grunge.

What is the best thing that Geneva has introduced you to?

All of these classic movies, like Casablanca and all of these things that I wouldn’t really watch on my own. But when we watch them, they turn out to be good.

What makes you love Geva the most?

A lot of things! She has lots of goals, and she knows what she wants. She’s really determined. She helps me with goals, too—I didn’t use to know what I wanted to do, but she helped me figure it out.

Can you tell us what that is?

I know it’s really cliché, but I want to write and she wants to work somehow in fashion. I want to live in New York and be an editor and write contemporary fiction. Geva and I imagine all these things we want to to do together, and we imagine these characters [doing them], and those people are in my writing now.

Do you guys have an inside joke that I can ask her about to make her laugh?

Well, you should ask her about her alter ego.

I’m gonna ask you some questions about Mallory, and hopefully it won’t be too weird to talk about her with her there.

It won’t be too weird! She’ll probably laugh.

Can she hear me? Hi, Mallory!

OK, so Geva, Mallory told me to ask about your alter ego.

Ohhhh, OK. She’s inspired by people in Heathers and all the classic mean girls. I can be really mean when I want to. It just kind of switches on sometimes when I’m pissed off—and it gives me a boost of confidence! Like, today I had an orchestra audition, and I put on an outfit that, like, Blair Waldorf would wear, or one of the Heathers, and I looked at myself in the mirror and said, “You’re gonna do great.” And I did! So it worked!

Yeah, it makes me feel really pretty. It’s weird—you just, like, think of yourself in character, then bring the rest of yourself into it!

Does your alter ego have a name?

She doesn’t yet. Maybe I should name her!

What are you guys up to tonight?

Mallory’s supposed to be helping me concentrate, but I feel like we’re going to end up watching Gossip Girl, talking about magazines, and obsessing over guys. She takes me away from my schoolwork, from orchestra…she’s really a bother! It’s ridiculous! [Laughs] But she doesn’t prevent me from doing the stuff I really love. I do drama and she’s always at at least one performance if she can make it.

Does Mallory do anything where you can cheer her on like that?

She writes a lot, and I love reading her writing. She’s a really good writer! She also takes lots of pictures, like if you look at her Instagram, it’s amazing.

Her writing tends to be really dark even though she’s a really bubbly person. It’s dark, but it’s beautiful.

Mallory, were you ever nervous about showing Geva your writing?

MALLORY: Showing other people, I get really nervous. Like, my parents don’t usually understand why my writing is so dark and weird. But Geva really reads it and gives me critiques on it. She tells me how I can improve it and she’s really helpful. She’s usually a character in my writing in some way or another. Or her alter ego. Daphne!

Geva, what is the weirdest thing about Mallory?

Oh, she’s a really weird person. She obsesses over things. When she first got into Gossip Girl, I wasn’t watching yet, and she was like, “It’s SO AMAZING, you HAVE TO WATCH IT.” She nagged me about it until I watched it. She pushes her obsessions on people.

What’s the best thing besides Gossip Girl that she’s gotten you into?

She’s gotten me into some new music, like Florence + the Machine and Lana Del Rey. But some songs that she’s played for me are really weird—like this one song called “Werewolf” by Cocorosie. I would never listen to that sort of thing on my own.

Do you two have any inside jokes?

I was doing an assignment for school and I needed to create a password, so I made the password “sexyed,” meaning Ed Westwick—he’s our biggest inside joke. We’re REALLY obsessed with him. He’s really hot, and he can sing—he’s in a band.

What would you guys do if you met him?

Ohhhhhmygod. So this girl that I stayed with in California—she meets a lot of members of bands—and she told me that you have to be CHILL when you meet people, so I would try to be chill. But inside I would be BURSTING with happiness.

MALLORY: He would fall in love with me, though.

Wait, Mallory, why would he fall in love with you over Geva?

MALLORY: Just because we both have, like, dark…well, actually, I don’t know that much about him. I just know about his character [on Gossip Girl]. But Chuck Bass doesn’t exist, so I have to settle for Ed Westwick. And I love music, so a guy in a band is just awesome.

I think it would be hard for him to choose, honestly. Geva, what do you remember about meeting Mallory?

She was my locker buddy in sixth grade. I loved her glasses, and her hair was really pretty and long and, like, dark, and it was awesome. But unfortunately I wasn’t very nice to her the next year. I had a friend—who’s not my friend anymore—who didn’t really like Mallory. So that kind of bounced off on me a little—it reflected in my actions, which was really bad. I shouldn’t let other people influence me like that.

Well, as long as you realize it now, it seems like it worked out for the best, right?

Yeah! I realize now that she’s just a wonderful person.

What’s the best thing about her?

Probably that she makes me feel really good about myself. Like, I don’t think necessarily that I’m the best-looking person, or that I’m a great person, but she’s always really supportive of me, and she makes me a better me. I think I’m kind of chubby but she says that I look fine, and, like, pretty and stuff. She makes me like myself more. ♦

To nominate your friend crush for Friend Crush, send an email to [email protected] telling us a little bit about her. We will only consider emails that include: both of your names, your ages, and a big, clear picture of EACH of you. Thank you!