Stream the new album by our (and probably your) new favorite band.

Because You Can: Always Onstage 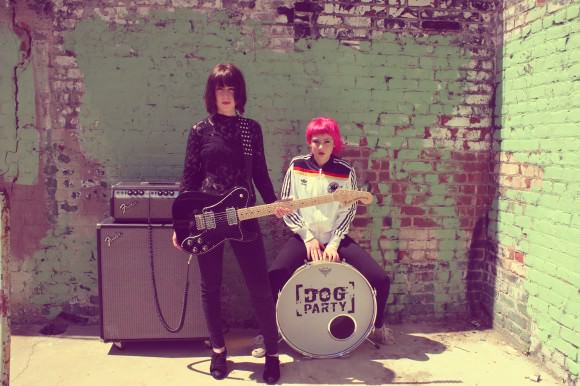 When Gwendolyn Giles was nine years old, she pushed a drum kit into the bedroom belonging to her six-year-old sister, Lucy, and hung a mic from her loft bed. Thus began the first Dog Party band practice; that was 2005. They wrote their first song that day, a loud and melodic number called “It Doesn’t Matter.”

Since then, the Sacramento duo has released two full-length albums, and later this month, the sisters, now 17 and 14, will release a third: Lost Control (Asian Man Records). That album, which you can listen to in its entirety below, is full of songs that combine an urgent pop-punk sound with personal and relatable lyrics that could have been ripped from Tumblr: “How could you be my friend, with the things you said?” goes the chorus “Best Friend.” “My heart will never mend, and now this is the end.”

When I called Dog Party last week to talk about the new album, they had just finished a U.S. tour and were on a family vacation in Lake Tahoe trying to finish AP summer homework.

Liz Pelly: Summer homework’s kind of a bummer. Do you have a lot of it?

Gwendolyn Giles: Lucy has to do English homework for her honors English class. I’m taking AP environmental science, and that requires some summer homework too.

What grades are you in?

Gwendolyn: I’m going to be a senior.

Lucy Giles: I’m going to be a sophomore.

Are you excited to be a senior, Gwendolyn?

Gwendolyn: It should be exciting. They say junior year is typically the hardest, and it’s nice to have that done with. Sophomore year was pretty hard. I tried to make junior year as easy as possible. I had a few big research projects, but I got to do them on music, which was cool! I did one project about rock & roll in the 1960s and how it created this whole counterculture and how a lot of movements rose up from that.

What is the biggest challenge of being in a band and also being in school at the same time?

Gwendolyn: It’s hard when we get asked to do an awesome show but it’s on a school night. Or when they are on a Friday night, but early, we either need to rush to get there on time or we need to leave school early.

How did you first start playing music?

Gwendolyn: In elementary school I joined band and played the flute, but I had braces so I wasn’t having very much fun with that. I wanted an instrument that I didn’t have to blow into, so I thought the guitar seemed pretty nice. I also started getting into Green Day then. Later Lucy started playing the drums.

Lucy: Meg White really inspired me to play the drums. When I was six, my dad went to a garage sale and bought the drums, but no one would teach me how to play them—[they said] I was too young. So I had to wait two years before I started taking lessons.

Gwendolyn: Then one day our family friend who is part of the L.A. music scene came over. He heard that we were both playing instruments, so he came over to house and taught us how to play “Surfin’ USA.” We started writing songs together the next day.

Gwendolyn: We didn’t have a lot of proper equipment, like mic stands. We moved the drum kit under my sister’s loft bed, and we took a mic cord from a karaoke machine and hung it from the bottom of the bed so it was dangling down and my sister could sing.

Lucy: I think the most frightening thing for me was singing. I didn’t really like singing. But now I do.

Gwendolyn: Our very first performance was a talent show. I was a bit nervous. The stage light was so bright, I couldn’t see anyone in the crowd. That was a bit nerve-racking for me. I don’t get nervous for shows anymore really, unless it’s something really big.

What were you listening to while recording Lost Control?

Gwendolyn: I was listening to a lot of ’70s punk and early-’80s punk, like the Ramones.

Do you have a favorite song on this album?

Lucy: Yeah, “Gutters” is cool. I like the drumbeat.

Gwendolyn: The lyrics don’t make any sense. It’s three different mini short stories in one song. One is about someone who lied to me and was being a complete idiot. The second story is about how I used to live in New York City, which is false—I never used to live there. The third one is about buying a new guitar, which I also didn’t do.

Do you have a subject you like writing about the most?

Gwendolyn: It’s pretty inconsistent. If I’m daydreaming and I think of certain little verses that sound cool, I’ll see if later I can stretch it out and make it a full song. Sometimes I’ll have a cool verse and won’t be able to turn it into a song, but then a year or two later I’ll find that piece of paper and write something from it. The song “How Are You Doing,” the first track on the new record, I wrote a year before we ever found it again and worked on it as a song.

What was the recording process like this time around?

Gwendolyn: We recorded at the Hangar [in Sacramento]. We did the record on tape. The past records we did digitally, with Pro Tools. I loved recording with tape because everything was rawer, and I think more fun.

Were you working with a producer?

Gwendolyn: No, we produced the record ourselves.

I read that you are also athletes. Are there similarities between sports and music for you?

Lucy: It helps to feel fit when we play music. It definitely helps with singing. If I run a lot, I can hold my breath longer.

Gwendolyn: Two years we ski-raced, and now we’re running cross-country for our school. We also used to play soccer. We’ve had to drop some of those because of school and music. A couple of years ago we used to not play music the whole winter because we did ski team and every weekend was either a race or we had to train. Now even though we’re still doing sports it feels like we’re doing a lot less than we used to be doing. It’s difficult to balance sports and school. It’s even more difficult to balance sports and music and school.

Do you have any advice for girls who are interested in starting bands?

Lucy: Just do it!

Gwendolyn: Making connections is important, and communicating with bookers and venues. Once you start playing shows, it’s easy to play more shows.

Are there any unexpected lessons you’ve learned from being in a band?

Gwendolyn: For me it’s kind of funny being able to go into bars and see what it’s like [while I’m] underage. We already know what drunk guys are like before we can even drink—and we know what to stay away from by watching other people.

Do you run into a lot of issues with age restrictions at venues?

Gwendolyn: Yeah, a lot. In Sacramento there are a lot of bars and very very few all-ages venues. Bars won’t let us play, usually. I’d say three-fourths of Sacramento’s venues we can’t play in because we’re too young. But it just makes us more grateful for the venues that we can play it, and we make the best of it.

What are some of your favorite all-ages venues in Sacramento?

Do you think people in the music business treat you differently because you’re young?

Gwendolyn: Some people don’t take us seriously, which kind of makes me angry. Also, people will say, “Oh my gosh, they’re soooo cuuuute!” and I don’t like that at all. Sometimes we write songs about it. Angry songs, [like] “You Doubt Me” from the first record. It’s about a lot of things, but not being taken seriously as a musician is part of it.

Lucy: Most of the time we just try to prove them wrong and have an awesome rock show.

What is the best part of being siblings in a band together?

Gwendolyn: We’re with each other most of the time. So if we come up with a song idea, it’s convenient to already be in the same house. Transportation isn’t an issue. We have the same schedules so there are not very many conflicting times. Usually in a band someone might be busy—but with us, if one of us isn’t busy, the other isn’t either.

And I bet it makes it a lot easier with not needing to get rides to each other’s houses. Do you drive yet?

Gwendolyn: I just got my license a couple of days ago.

Oh, congrats! Are you psyched?

Gwendolyn: Yeah, I’m pretty pumped. It’s cool to be able to meet up with friends different place without having to wait for my parents to drive me. Except Sacramento has a curfew [for minors]. It’s 6 AM until 10 PM, I’m pretty sure. And until I’m 18 I don’t think I can drive Lucy around. That’s in less than a year. Then I will be able to drive us to shows. ♦

Liz Pelly is a writer and editor based in Massachusetts. She spends a lot of time hosting shows at her house and editing an online ad-free alt-weekly newspaper, fvckthemedia.com. You can contact her via email, Twitter, or Tumblr.