We premiere a rare track and talk about overcoming doubt with the legendary trumpeter of Sly and the Family Stone. 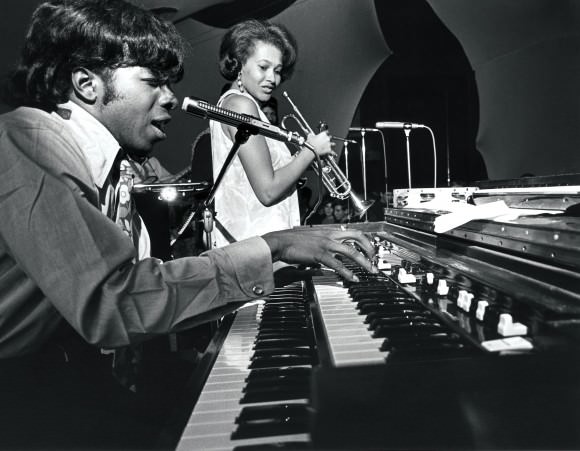 For nine years and six albums, Cynthia Robinson was the trumpeter and occasional vocalist for the legendary funk and soul group Sly and the Family Stone. The band were not only musical trailblazers, but also the first racially integrated, coed group, with Robinson as the first female trumpeter in a major pop band. Shy but determined, Robinson did time in any band that was willing have a female horn player until she was handpicked by Sly to join his band in 1967; two years later she would play Woodstock.

Today Robinson plays with the recently reformed Family Stone. She spoke to Rookie about her early struggle to get the respect she deserved, and about her subsequent life in music. And we are honored to premiere a rare track, “Dance All Night,” from the epic and very necessary Sly and the Family Stone box set, Higher, which is Legacy is releasing this week.

PAULA MEJIA: How did you start playing the trumpet?

CYNTHIA ROBINSON: I played the flute in elementary school, but when I got into high school they didn’t have any flutes; they gave me a clarinet and said, “Play it in the same way, just hold in a different position.” I really didn’t care much for it. Then I heard this kid playing trumpet in the practice room. Most high school bands are not in tune, but this kid must have taken private lessons. I listened to him and I just thought, WOW. I didn’t even know what instrument it was, but he was playing it so beautifully! I stood by the door until he finished, and when he came out I said, “Can I try that?” He said sure, took the mouthpiece out, wiped it on his shirt, put it back in, and handed it back to me. Everything I blew was off key, but I knew it could sound good if you worked on it, and that’s what I wanted to do.

I knew nobody was going to hire a female trumpet player, so after I graduated I studied music at city college. I was at this beatnik’s house one night and he had a trumpet just sitting in the middle of the floor. I said, “Whoa! Whose is that?” The beatnik said, “If you play it at my party Friday night you can have it.” That Friday I was up in his loft, trying to find the notes to “Summertime.” I kept missing and scratching the notes; I decided I couldn’t do it because I wanted to play the whole song and I couldn’t do it. I walked downstairs and everyone in the house was clapping. The beatnik said, “It’s yours.” That was the first horn I ever owned. It smelled bad; it had all kinds of green crud inside the tubing, so I took it home, cleaned it, soaked it in hot water, cleaned it all out, and it was mine.

Did you want to be in a band?

I didn’t think I could play in a band. It just wasn’t an option—all band members were men and bandleaders were men. I ended up doing a gig with a friend’s band because they needed a trumpet player—they paid me ten bucks. The band was running up a huge bar tab; I didn’t drink, but my cut came out of that. I was so upset, but I kept going back because they were the only guys that would let me play. That was the beginning of my career. It was a very rough start.

How did you meet Sly Stone?

I knew Sly as an acquaintance. One day he was driving down our street with some friends and he pulled over. I walked over to talk to him, and my mom came out of the house. She saw a guitar in the backseat. She played guitar, but I didn’t know that for a number of years! She asked, “Whose guitar is that?” and Sly said it was his. She asked him to come in and play, but he couldn’t because his cable was broken. She said, “Wait right here,” walked to Tower Records, and bought a cable on the spot! She gave it to him and said, “Now you better be able to play.” Sly and his friends came in—a tall fellow named Daryl, a singer named Jimmy Terrell, and Sly on guitar—and played a song. My mom wanted me to get my mellophone, but I didn’t feel like I could play with them because I didn’t know the latest songs. I joined the band about five years later.

What was it like playing with Sly and the Family Stone?

Sly was handpicking all these musicians for a group. The first song we did was Ray Charles’s “I Don’t Need No Doctor.” Sly told Jerry and me which notes he wanted to play and what harmonies he wanted to do, and he counted it off. We hit that first note, and it was like the Fourth of July—I just saw sparks and lights and my body just went totally nuts. I couldn’t play anymore—it was magnificent. I’d never heard a sound that great. Out in the far edges I heard Sly say, “Play those notes I told you!” And I did, and that was the greatest experience I had with that band. I just had a feeling this was going to be a life-changer for me, but even my dreams weren’t as great as what actually happened.

Sly and the Family Stone was the first multiracial coed pop band—it was a huge deal. Did it feel like a big deal at the time?

That never really came up at all. I realized I was a girl playing with all of these great musicians, but race and gender never did cross my mind, really, until other people started talking about them. They weren’t really an issue for me.

You were one of the first women in a pop band playing their own original music at a time when most women were singers. What did women in other bands say to you?

The singers were fantastic, but they never said too much to me or gave me advice. I guess I looked a little odd to them. I was an introvert, so initiating conversation just wasn’t going to happen. I was just happy to be playing with my band, and we all got along. We looked out for each other, and it was great.

Were you shy, or was it more that you couldn’t relate to others as well?

I was shy, yes. And somehow I couldn’t put my feelings into words. Stuff would come out wrong, and I could make enemies with stuff like that happening, so I mostly kept my mouth shut. Sly gave us all nicknames. Mine was Echo, because I would say, “Yeah! That’s right!” and agree with people a lot instead of talking about my own opinions.

Seems like music was the perfect way to channel that.

Absolutely. And the lyrics of the songs that Sly wrote—I just couldn’t believe how he hit upon so many things that meant so much to me. One of the things he sang was, “Don’t hate the black, don’t hate the white. If you get bitten, just hate the bite.”

My ma and grandmother also used to tell me that. I used vent to my mother and blame everyone for one person’s actions, and she’d say, “It’s just that one person, Cynthia.” When Sly wrote that song it was like, “Yeah! That’s what my ma said to me!” That’s a value that I carried with me.

You went from being underground to mainstream in less than two years. How did that feel?

It was very interesting! We were all in the car one day, and one of our songs came on the radio. I went, “Yeah, that’s cool.” Someone said, “Aren’t you excited?” but I wasn’t, because I’d heard it before. Then they told me it was a Top 40 station, not an underground station, and I freaked! We sold out three nights at Madison Square Garden, and we had enough ticket requests for a fourth night, but Sly’s manager said, “No, we have to leave them wanting more.” We were not even anticipating or reaching for stardom when we started; we just loved playing together.

Do you have any advice for young, creative women reading this?

If you have that spark of creativity, you already know you have it because you have some kind of desire to do it. You have to keep doing it so your creativity can develop. Look and listen as much as you can, and see what you can improve. If you’re a musician, there’s no instrument that can be withheld from you. If you’re drawn to it, develop the talent for it. ♦

Paula Mejia is a frequent contributor to SPIN, the Village Voice, and Myspace. She lives in Washington, DC, and tweets here.