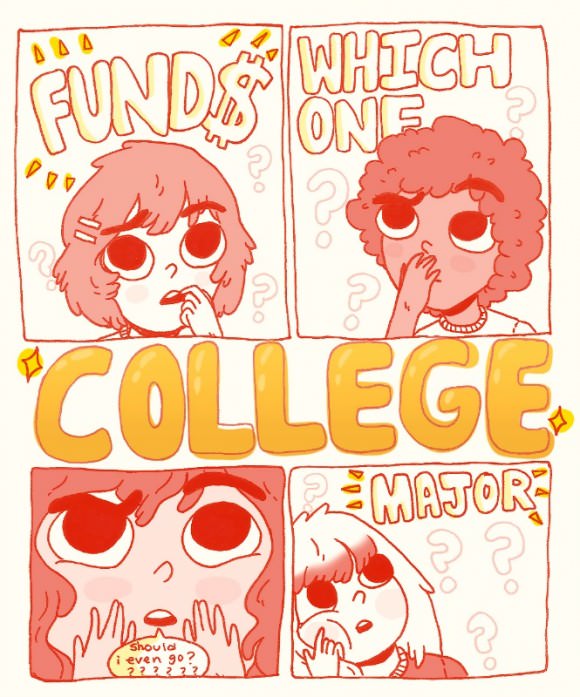 Going to college was always in my future. All throughout my grade school and high school years, it was just assumed by everyone around me that I would pursue higher education after graduation. I decided what I wanted to study in middle school (journalism, though adults currently in this dwindling field are probably laughing at my choice), and my family had the financial means to send me to school, something that I’m immensely grateful for. I had it easy.

But even the easy road has some significant bumps. First, I got rejected from my dream school and had to scramble to apply to other schools. Then, the first place I picked was just not the right place for me, and I was miserable. At first I thought I just hated college, but eventually I realized I was just at the wrong school, so I transferred. I love the school I’m at now, but there are so many problems I could have avoided along the way had someone told me a few things first.

Have no fear, class of 2014 (and classes of 2015 and thereafter): Rookie’s here to tell you those things now, before it’s too late, and to help you answer some of your biggest questions about applying for higher education. Maybe you’ve always wanted to go to college but haven’t thought about the specifics, or maybe you’ve never considered it because you’re unaware of your options. I’ve gathered advice from Rookie staffers who are currently in college or who’ve made it through to the other side. Hopefully some of their wisdom will help you make sense of this whole confusing, nonsensical process.

Should I even go to college?

Well, do you really want to go? It seems like a simple enough question, but it’s hard to figure out how you really feel when you can’t see into the future to assess the consequences of any decision you make today. Plus, there’s probably at least one person in your life telling you that you’ll never be successful in life without a college degree. But applying to schools is a yearlong slog of exhausting paperwork, and private universities are expensive—you wouldn’t want to embark on this process or incur a bunch of debt unless you were sure you wanted to be there, right?

So how do you figure this out? First, ask yourself why you think you might want to go to college. If you can’t come up with anything beyond “My parents think I should go,” college might not be for you.

“Don’t go to college just to impress your folks or to keep up with your friends,” says Suzy. “Go because you want to be there and are ready to devote a few years of your life to being a damn good student.”

There are plenty of valid reasons not to go: Maybe you’re just not ready for college right now—it’s OK to take a year or more off until you feel like you are. Maybe you just hate school and want to direct your own education or get a job you don’t need a degree for. Maybe your family can’t afford to send you right now. Maybe you have to stay home and work to help support your family. No matter what your reason, you DON’T HAVE TO GO. I know it seems like I’m screaming at you, but that’s only because I am sort of screaming at you.

“School is a game, with rules and strategies and all different people you must work with,” says Dylan. “If you don’t like playing that game, notice that about yourself! There are so many other ways to learn and gain experience and be active in the world.”

“College opens the door to lots of jobs that require a college degree as a bare minimum,” says Krista, “but I have lots of friends who didn’t go and who got a four-year head start on all the rest of us—plus, they are debt free.” Coco Chanel, Yoko Ono, Lady Gaga, Mark Zuckerberg, Steve Jobs, Taylor Swift, Ellen DeGeneres—not a single college degree among them. And they seem like they did OK. (And if you end up changing your mind in a year or 10 years, you can always apply then.)

Or maybe you do want to go to school, just not right away. You can always take a gap year: a break from constant schooling that lets you travel, explore, try out some jobs, concentrate on your application to the college of your dreams, or, suggests Stephanie, “go to workshops, get a job or an internship, or take your core requirements (plus any other classes that interest you) at a community college.”* Your education isn’t a game of connect-the-dots; there isn’t a “right” way or a “wrong” way to do it.

College probably is right for you if you want not just a fancy-ass degree, but also an opportunity to learn—about your field of study as well as yourself. “In college, most of the learning is internal,” says Krista. “I can hardly remember my classes, but I learned so much about myself and the world in such a short time that it remains one of the best times of my life.” Dylan agrees: “Basically your job as an undergrad,” she says, “is to get life skills and become the most interesting, intelligent version of yourself as possible.” Does that sound like something you want to do? Then read on.

Can I afford it?

Once you’ve decided that you want to go to college, think about how you’re going to pay for it, because, goddamn, college in this country is majorly expensive! Like, mind-blowingly expensive. “Private colleges are run like corporations,” says Suzy. “Unless you’re doing something like law or medicine where you need a degree, private college might not be worth it.”