Glitter in the Dark

Natasha Khan of Bat for Lashes lets us peek inside her tour wardrobe, and it does not disappoint. 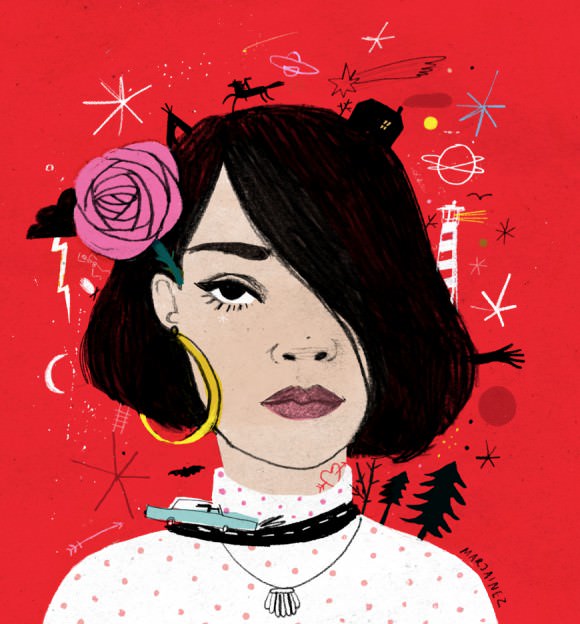 I’ve been obsessed with Natasha Khan, better known as the musical act Bat for Lashes, since I was 15 years old and heard her first album, Fur and Gold. I had just finished reading Women Who Run With the Wolves, a celebration of women’s true, wild nature, and I found Fur and Gold’s language (“The caves of our mouths are forest darkness, and the air in between is overflowing, and the rushing wolverine flies past his shiny, shiny teeth,” etc.) very appealing. I remember lying awake at night listening to that album, making up visuals in my mind: night skies and wilderness and glitter and shadows. Each song is a magical little diorama full of secret symbols waiting to be unlocked.

Bat for Lashes’s third album, The Haunted Man, came out last fall. It’s a gorgeous record that was partly inspired by stories she learned while researching her family’s history. The title song, for example, was inspired by her grandfather’s experience after having fought in World War II—he returned home to Pakistan traumatized, with nowhere to turn for help. Other songs seem more like Khan’s songwriting and orchestration are more ambitious than ever, and her lyrics just as enchanting. “You’re the train that crashed my heart, you’re the glitter in the dark,” she sings on the gorgeous ballad “Laura,” igniting a flurry of images in my brain, losing me more sleep while I picture it all. (I’m not complaining!)

Since the release of The Haunted Man, Natasha, who lives in London, has been touring nonstop. I caught the last stop on the UK leg of her tour in London last week, and she put on a phenomenal show. Earlier that day, before her sound check, I was lucky enough to get to meet Natasha. She let me peek inside her wardrobe and shared some of her favorite items with us. Here are my drawings of those special pieces, along with Natasha’s descriptions. 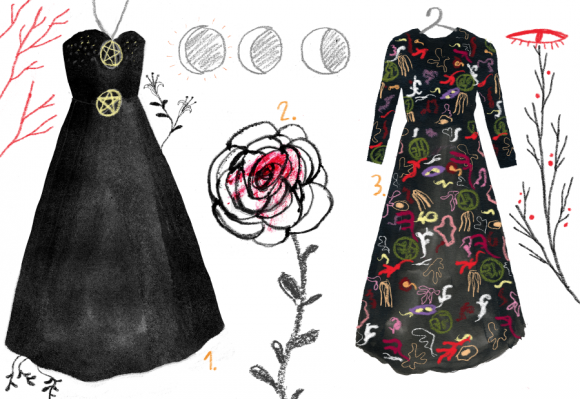 1. Pentagram dress. “I’m quite excited about this one. We only made it yesterday, and I’m gonna wear it for tonight’s show. It’s just a long, black strapless dress with two shiny pentagrams and a matching cape with sparkling little stars on top.”

2. Silk flower. “I often go to old vintage shops in search of some old silk flowers, which I put little clips on. There are many descriptions of nature on The Haunted Man, about blooming, blossoming, and floral things, plants and landscapes. The record is about becoming a woman, and the flower is a metaphor for women and their sexuality. I also like the idea that Billie Holiday always wore a flower in her hair.”

3. Full-length print dress. “I designed this gown with a dressmaker. I was thinking about some old folk illustrations I had seen, as well as Vogue magazines from the ’50s and ’60s. I was also very inspired by the documentary Grey Gardens and women in the ’60s and ’70s wearing a lot of matching graphic prints. I’m in love with the idea of dressing all in patterns.” 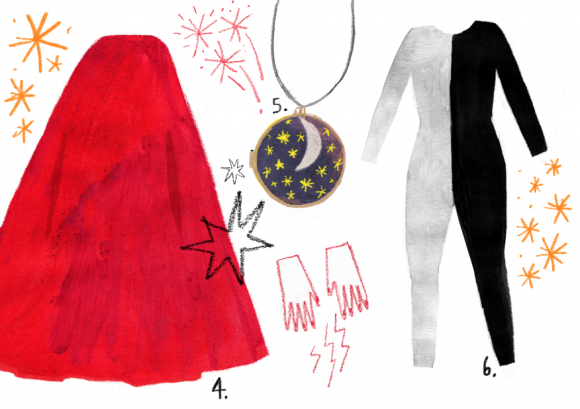 4. Red cape. “This one is one of many capes I’ve had. Capes are mystical and wizard-y, there is something magical about them. They have this alchemical aspect—you can hide and reveal things in a very theatrical way. This one was made for me by Romance Was Born.”

5. Locket necklace. “This necklace with a moon and the night sky was made by my friend Lee May Foster. She has this little shop called Bonbi Forest where she sells her jewelry, T-shirts, and screen-printed textiles. She makes beautiful things, and she sent this locket to me as a birthday present.”

6. Black-and-white unitard. “This was made for the ‘All Your Gold’ video. I was doing some contemporary dance and choreography stuff while I was writing the songs for The Haunted Man, and the inspiration for this outfit came from contemporary ballet costumes and Merce Cunningham in the 1960s. I was also inspired by a dancer called Martha Graham—she was very big-skirted, all in monochrome.” 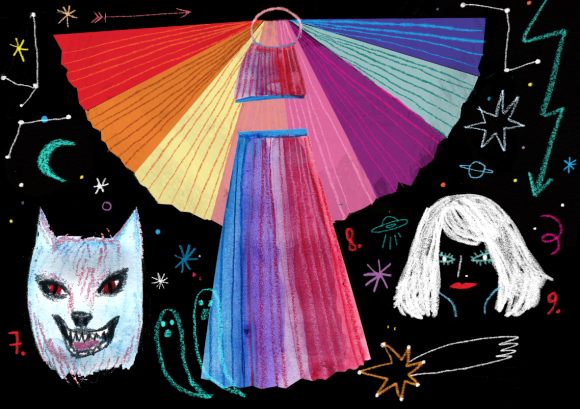 7. Scary-animal mask. “Whenever I go to America I go to the Halloween shops. They make such a big deal out of Halloween there! I was born a week before Halloween, so as a little kid my birthday parties were always Halloween parties. [This mask] reminds me of films like Donnie Darko, E.T., The Karate Kid, and all those movies from the ’80s with kids dressing up and being ghoulish. There is something punk rock about that.”

8. Rainbow crop top, maxi skirt, and cape. “After they made that red cape for me, Romance Was Born designed a rainbow one for their own collection. Then they made me a matching skirt and a little top so I could wear them all together onstage (with my favorite Hasbeens).”

9. Blond wig. “Blond [hair] represents the femme fatale aspect of myself. She comes out in different ways all the time. The wig is a kind of symbolic disguise—it reminds me a little bit of David Lynch’s films. In Lost Highway the main character goes all the way from black hair to blond. When she’s blond she looks innocent and sweet, but deep inside her soul she’s the darkest one.” ♦