A video premiere from Rose Windows. 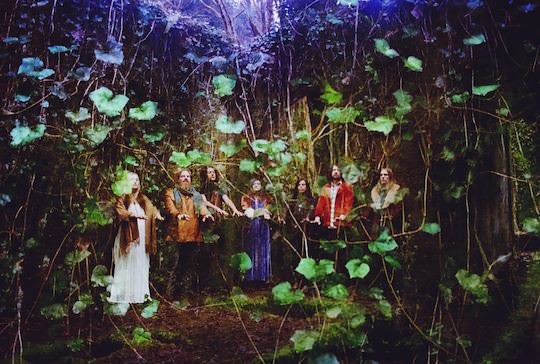 Rabia Qazi is the stylish and talented 22-year old frontwoman for Rose Windows, a seven-piece psychedelic band from Seattle. Sup Pop released their debut album, The Sun Dogs, last week, and we are fortunate to premiere their video for “Wartime Lovers” right here on Rookie!

I spoke to Rabia last week about singing and her inspiring life while she looked for things in her closet to sell on Etsy so she could have money for the tour. —Jessica

JESSICA: When do you remember wanting to sing, and when did you start singing?

RABIA QAZI: The first time I really started singing was with Chris Cheveyo, our lead guitarist—whenever he would play, I would want to sing. Working with Chris inspired me to start Rose Windows. The first time I remember wanting to sing was at my Arabic school in Texas when I was younger; all of my second and third grade teachers loved my pronunciation during the morning prayers, and I realized then that maybe I could sing. It was still a big pipe dream, though.

Did you sing by yourself?

I was really nervous singing in front of people, and felt most comfortable in hallways or bathrooms when no one else was around. I didn’t know if I was hitting the right notes or anything; I didn’t get to listen to music growing up, so it was weird figuring out notes.

Why didn’t you get to listen to music?

My family was Muslim. My dad is from Peshawar, Pakistan; he got married and had four kids with my mom, who grew up in Texas. My dad forbade all music except, like, drums and Arabic suras, which are Koranic verses. I would only hear music at the grocery store, or the Pakistani songs my dad let me listen to.

What Pakistani music did you listen to?

This ’80s band Vital Signs had a song called “Dil Dil Pakistan,” and I loved that song. And I was allowed to listen to Ravi Shankar, his daughter Anoushka, and recordings of Arabic chanting. It all really inspired me, and still does.

How did you eventually encounter pop music? Was it like going to a friend’s house and your mind getting blown by their Madonna tape?

[Laughs] That’s exactly how it was in middle school! Back then, my friend Curtis said, “You’ve never heard Nirvana?!” He was astonished because all of the kids in my school were listening to Nirvana. We were more free after my parents got divorced when I was 12 or 13. My mom came out as a lesbian, and then we could listen to whatever we wanted. I got really into Black Sabbath’s Paranoid and ’60s and ’70s rock & roll. My friend’s dad played Led Zeppelin for me when he found out I had never heard them. And I was really into the Blood Brothers—they were my first show.

Whoa. That’s a pretty intense band to see as your first show!

I remember watching Johnny Whitney just go crazy on stage and people headbanging—I had never seen that before, and then all of the sudden I was doing it, too! [Laughs]

Your parents’ split must have ushered in a lot of cultural revelation very quickly.

It was the transformation of my life. It was really beautiful, but also really sad—your parents are splitting up, but it was beautiful to see my mom come out and fall in love with a woman. Homosexuality is totally forbidden in Islam, so it was awesome to see her open up. She had always lived in a full niqab, covered except for her eyes until she got home. She was a modest and very devout Muslim, but you could tell she was not happy. My dad was pretty controlling, and those customs are hard to live by in the United States. That said—I want to be really clear—it’s a beautiful religion. My dad was extreme, but the whole religion isn’t like that. But it also felt great to be able to go outside in shorts and a T-shirt, or to be able to go to the dance at school. It was nice to participate in things after school, and make friends with people of other cultures and races. I have been really nervous to talk about this because there are already so many weird things going on in people’s heads about Islam.

Growing up under those restrictions, did the thought of becoming a [professional] singer ever cross your mind?

When I was really young I would always imagine myself on stage performing for people, and thought it would be the most beautiful thing in the world. I am awkward and shy, so I never really got the chance to open up. Now that I have, it feels incredible. I dreamed of singing, and it felt like it was manifesting inside of me. It feels good to be able to express myself in this way.

Now you are in a band, sharing this experience with six other people. How is that?

It feels so new! Our record just came out this week; it’s all been building for a long time. This girl from Argentina sent me a message on Facebook saying she heard my voice and started crying. When I listen to music—and so much of the music I listen to has female vocalists—I find myself crying too. It is the most beautiful feeling to be captivated by someone’s voice. It’s very rewarding to give back that feeling. It’s just incredible to be able to do something so good with my life. ♦