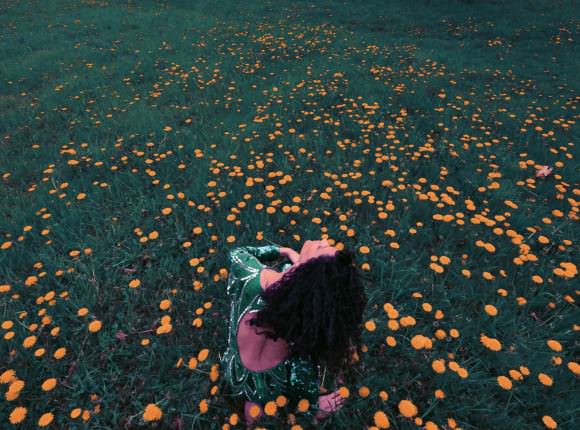 A K U A is a good example of what can happen when you take your time to develop your art. The Montreal-based singer came up in choirs where she was content to blend into the background, and for a time sang covers in a hotel bar in Dubai—all in the name of finding her voice. Only after she had learned how to write her own songs and made some progress on overcoming her stage fright did she start work on the most beautiful EP, One’s Company, recorded with her friends Martin Rodriguez and Andy Bauer. Then she played a mermaid in the video for her song “Gravity” video, which was shot underwater in the Florida Keys. If we were betting gals, we’d put money down on this one’s future superstardom. And so did Solange: A K U A recently opened up for Ms. Knowles in Montreal, and she made such a good impression that she was asked to sing backup for Solange’s tour. If you caught the show at Pitchfork Music Fest in Chicago last weekend, A K U A was the one wearing the blue skirt and the white button-down, looking terribly gorgeous. Before those shows, though, she recorded a cover of the classic Sinéad O’Connor song “Nothing Compares 2 U” (written by Prince!) for this month’s Rookie theme song. Please enjoy!

I recently spoke with A K U A about choosing this song, overcoming self-consciousness, and the burdens of being a mermaid. —Julianne

JULIANNE: Why did you choose to cover this Sinéad song?

A K U A: [For the Imitation theme] I was thinking a lot about women and mimicry and trying to emulate things as a woman. Ideally I would have just written something from scratch, but I think the best thing about covers is to take something that doesn’t necessarily suit you or suit the time and make it relevant. It’s fun to keep someone’s artistic memory alive by re-creating their work, you know? Like if someone wanted to remix or cover a song of mine 40 years from now and bring it back to life, that would be really cool!

How did you psyche yourself up to transition from backup singer to frontwoman?

Singing is so personal—most people are not comfortable just singing in front of a roomful of people. It feels like you’re exposing yourself, so it’s a huge thing where you’re afraid of being judged or that they’re deciding your worth. But as I’ve gained confidence over the years, I’ve started to shed my old self-consciousness. I started taking more risks musically and put myself out there—it was just affirming that I was capable. It wasn’t about being good enough or not good enough, it was a matter of believing in what you wanna do.

I had had this idea of what a good singer was, from an “objective” standpoint: virtuosity, chops—American Idol shit, you know? I was in a choir where there were a lot of big singers, and I was always comparing myself with them and trying to emulate them. That American Idol style does not suit my voice, so in order to own up to my voice I had to write my own music, because it was music that actually suited me.

And now you’re like, an extreme success story of overcoming your fears.

You know what, though, I think it’s really common—it just depends on what some people choose to tell. I wouldn’t necessarily have to tell anyone that I used to be timid, but it’s very common for singers to feel as they grow into their voice.

Can we talk about the “Gravity” video? I feel like it’s every girl’s dream to be a mermaid. How was that?

[Laughs] We were in the deep sea; there were a few shots where we were literally in the middle of the ocean. We were a crew of five and we had a guy who took us out there on a boat. We had told him we were just going snorkeling, and then we showed up and he was like, “Yo, you’re like trying to film a movie.” We were like, “Surprise!” I don’t wanna kill it for you, but I can only breathe underwater for so long, so whole it was really amazing to get to swim in the video, I couldn’t enjoy it for very long. I had to come up for air a lot. I’m not a super-strong swimmer, so I trained at the YMCA beforehand. There were a few afternoons where everyone thought I was the weirdest person at the Y. I’d be doing these awkward dolphin kicks alone in the deep end. But I’m really happy I did that.

It seems like it would be really hard to swim in a mermaid costume.

There are two flippers inside the tail, but they are glued together, so it’s like going in the water with your legs Saran-Wrapped together.

It’s cool that you’ve gone from one end of fear to the other. What are you doing next?

I’m just trying to get my music out there! Now that I have the EP out, I feel like I understand more how to do that. And I wanna do it again! ♦

a k u a solange knowles theme song