What you reveal to the world every time you open your mouth.

I Fake It So Real I Am Beyond Fake 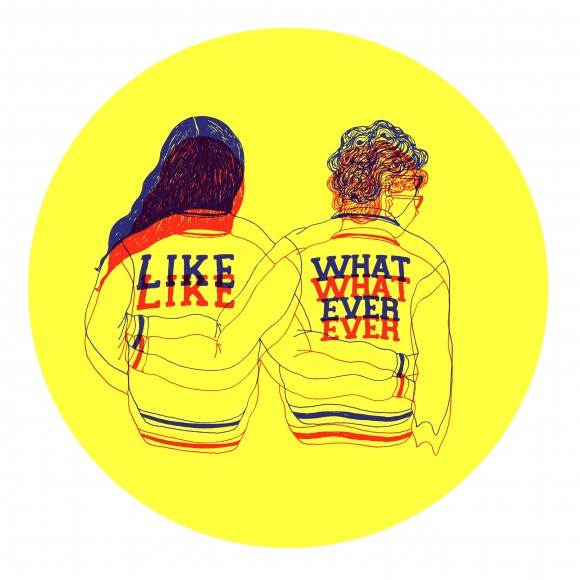 As someone who prefers to stay in observer mode during most social interactions, I’ve spent many, many years listening to people talk. I love to hear people’s stories, no matter how mundane the facts may be (“Sooooo in the end it turns out that red mulch was much better for my yard—and my wallet, am I right?”), there’s a hidden story—a secret set of messages—in how someone delivers information. If you pay attention to people’s speech patterns and verbal tics, you’ll get a glimpse into their personal history—where they’re from, how old they are, what subcultures they may have occupied, and when. To demonstrate, here’s what you’d hear if you eavesdropped on me at various points throughout my life:

1. The moment I started speaking–present: “like” and “you know”
By now these utterances, popularized by the Valley Girl craze of the 1980s (the pinnacle of which was this amazing song by Moon Unit Zappa), have become part of my natural way of speaking. (I’m lucky that I avoided later Valley Girl speech innovations like the vocal fry and ending all sentences like they’re questions? [Exception: See #4, “Right?”]) I’m aware that “like” and “you know” drive people even slightly older than me crazy, and so I’ve been working on monitoring my speech, the better to control it in situations like job interviews or meeting with academic advisors—anywhere I don’t want to come off sounding stupider than I am. But these two guys are so deeply embedded in my speech patterns that extricating them has proven nearly impossible. I recently tried to get through one day without saying “like,” or “you know”—I made it, like, four minutes. It was really hard, you know? Especially when all of my friends constantly use them as well, and because they are so dang useful: “Like” and “you know” are easy little tools to use when you need to take a brief pause while talking to organize your thoughts—essential for people with ADHD, like me for example. I’ve come to see them as benign habits that I have no hope of ever quitting.

2. Earliest speaking days–present: “man”
This one comes directly from my parents, who graduated from high school in the late ’60s and still use “man,” both jokingly and not, on a regular basis. Growing up, I heard “oh, man” and “hey, man” and, when my mom was making fun of the ’60s, “far out, man,” all the time. I started saying “man” when I was small just to be silly, then it stuck. Now I just use it every day the same way I use “hello” and “goodbye,” naturally and frequently. I probably sound like a total jerk, but whatever, man.

3. Late 1980s–present: “dude”
Pretty sure I picked “dude” up from Bill S. Preston, Esq., and Theodore “Ted” Logan, though Michelangelo from Teenage Mutant Ninja Turtles probably bears some measure of responsibility as well. Everyone I’ve ever loved has been called “dude” by me at least 8 million times. Dude. Dude! Dude. Dude. For real, dude. Seriously, dude. What’s up, dude? Dude, no way. Come on, dude.

4. 1990–1992: “NOT!”
The early ’90s were weird, man. For a while, the best comeback a fourth-grader (like I was at the time) had was “NOT!”—a truly stupid saying popularized by the legendary Wayne Campbell and Garth Algar of Wayne’s World and emblazoned on every corny sweatshirt, Hypercolor T-shirt, and office mug you could find. It was even named Word of the Year in 1992 by the American Dialect Society. Once in a while someone’s mom or grandpa will drop a “NOT!” like it’s 20 years ago and it is the best, because they’re the only ones who can still pull it off.

5. 1990–present: “Right?”
I can distinctly remember being nine or so and listening to my 12-year-old cousin and 16-year-old sister talking to each other at my aunt’s house. It sounded something like ths:

“So I was going to the pool yesterday, right?”

“And I totally forgot my towel. So I ask the guards if they have an extra one, because you know they do, right?”

“They totally do! I’ve seen them hand towels out before.”

And so on and so forth. “Right,” I picked up, was being used both as a quick way of asking, “Are you paying attention?” and as a means of getting confirmation that what you’re saying is obvious. In an effort to sound more “grown up,” I started using it as often as I could. “So I was on the bus, right?” somehow sounded cooler and “more mature” than “I was on the bus” to my 9-year-old ears. Little did I know that it was the start of a Valley Girl–ish end-of-sentence upward inflection that haunts me to this day. I can’t even help it at this point: “Right?!” just shoots out of my mouth, the same way “hey” or “OK” or any other word I’ve ever learned does, natural and necessary and simply a way that I communicate, as annoying as it may be to others.

6. 1991–present: “whatever”
Oh, “whatever.” The be-all-end-all of ’90s teen slang, a grunge-era Gen X apathy relic that became anthemic thanks to Kurt Cobain (“Oh well, whatever, never mind”) later used incessantly by Angela Chase and company on My-So-Called Life (usually in the “or whatever” form, an exquisitely half-assed way to end a sentence) and finally owned by the great Cher Horowitz of Clueless, who, along with her classmates, popularized the practice of pairing the spoken word with the W finger sign and solidified “whatever” as the answer to, well, basically everything a person didn’t want to answer. “Whatever” has never left me, mostly because it’s multipurpose: It can be used to shrug things off, to passive-aggressively end a conversation/argument, or to express a complete lack of interest in the topic at hand. It’s a quick way to sum up a million emotions in one word, and if you don’t like it, well, whatever.

7. 1995–1999 (and, honestly, all the time still): “mad”
We’ve established I went to high school in the late ’90s, which was a mad buggin’ time for language arts among teenagers. The most common intensifier we used was mad. Mad crazy. Mad late. Mad tired. Mad dope. Mad busy. And so on and so forth. “Mad” was constantly coming out of my mouth until I moved to Boston for college, and then, naturally, it was replaced by…

8. 1999–2002: “wicked”
Growing up in New England, I was already familiar with “wicked,” but it became a full-blown vocabulary ISSUE when I moved to Boston and suddenly found myself adding it to every other sentence. Things weren’t just “awesome,” they were “wicked awesome.” I couldn’t shake it until I left the city—and even now, more than a decade later, it still creeps into my daily speech, particularly when I’m with my New England–based family or when I’m really, really tired, for some reason. There’s something comfortable and familiar about it, something that reminds me of home.

9. 1999–present, but only in private: “babe”
Ugh, I know. Nobody wants to be around that couple who incessantly call each other “babe,” but what can you do, man? Love works in stupid ways. However, I am careful not to “babe” out in public, because I’m not a jerk, and because the only person who can pull it off is Will Arnett in Hot Rod.

10. 2011–present: “ahriiiiight!”
This one is relatively new, and it’s annoying the hell out of my family, but if you love Bob’s Burgers as much as I do, it’s hard not to pick up the characters’ fantastic and endearing verbal tics—especially Linda Belcher’s “ahriiiiiight.” This happens to me a lot: a phrase makes me giggle, I realize that I can mimic it fairly well, and I start using it when I’m alone in the house, either talking to myself (What? It makes things less boring) or talking to the dog or whatever. And then I’ll slip and start catching myself using it in public, no matter how strongly I abhor the thought of becoming one of those “Hey! I quote movies!” people who do nothing but essentially recite scripts to you instead of having conversations. I actually have to bite my lip to stop yelling “Ahriiiiight!” in circumstances where nobody would know what the hell I’m talking about.

If you examine your own linguistic habits and those of the people around you, you’ll discover a similarly telling history. Humans are copycats—no matter how unique we think we are, how we dress, socialize, dance, eat, and talk is heavily influenced by our environment. We don’t always keep the things we pick up (I haven’t said “Peace out, Cub Scout” since roughly 1995), but for the most part, our speech tells our history. It contains bits and pieces of everyone and everywhere we’ve ever known and rolls it all up into a lovely, weird little ball of words. Right? Right. Ahriiiiight! ♦