I’m not a hoarder—I’m just nostalgic. At least that’s what I tell myself. 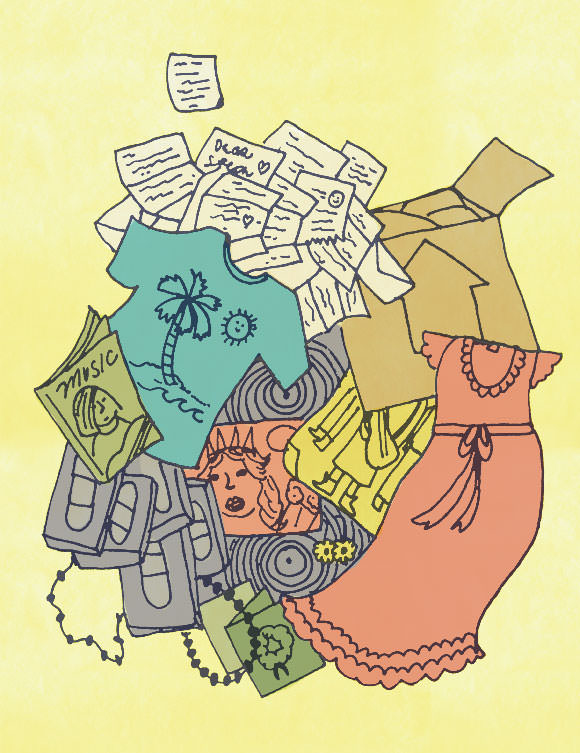 I’ve been a packrat for most of my life. Before my age even hit the double digits I had accumulated so much stuff that my bedroom strained to contain it all. The jewelry box I started filling in fourth grade was heaped with broken necklaces, single barrettes, and solitary earrings. My sock drawer was stuffed with mismatched (and often hole-y) socks, because those black cat socks were the cutest thing on earth so I couldn’t part with them even though they were worn threadbare. And I wore those Bubble Yum earrings, like, every day for all of fifth grade; even though they were kind of faded and I hadn’t worn them in years, they were imbued with serious memories, and I couldn’t bear to part with them.

By high school, when it became clear that I wasn’t going to grow much more, I had even more reason to hold on to every item of clothing, because what if I decided I wanted to wear them again one day (even if I hadn’t worn them in six months)? My tiny closet was soon crammed to capacity. I was told to “make room” in there every fall before we went shopping for new school clothes, but I was never very successful.

Every once in a while my parents would ask me to get rid of some things at a neighborhood garage sale or with my mom’s regular donation to the Purple Heart Foundation; they’d try to bribe me with the promise of new stuff, but I’d resist. “God, you have to keep everything,” my mother would say with an exasperation that I didn’t find entirely convincing—after all, she was the one with more photo albums than I could count, a scrapbook from her teenage years, and something she called the Memory Box.

The Memory Box was an actual physical box where my mother set aside stuff that she thought we should get rid of, but that we weren’t ready to. This was supposed to be an honor bestowed only on our most precious and special things; the problem was that I thought everything was special—the black sweatshirt with neon swirls that I’d worn on picture day to fifth grade, the T-shirt I’d bought on our vacation to the Apostle Islands, the Disco Sucks T-shirt that my uncles had given me when I was a baby (I was born the day after Disco Demolition Night in Chicago).

Unbeknownst to me, my mom also maintained a second box: the Letting Go Box. This was a kind of object purgatory, where everything we gave her for the Memory Box would sit until it seemed safe to assume we wouldn’t ask for it back. Then my mother would decide what deserved to be kept— the rest was donated or thrown away! I literally just found out about the Letting Go Box in the process of writing this story! I feel a little bit betrayed, but since I never actually missed any of that stuff, I know my mom was right.

My room filled up as the years went on. I saved all the notes and letters my friends wrote, and I also collected clothing (especially vintage dresses) and books, since I’ve always been an avid reader. 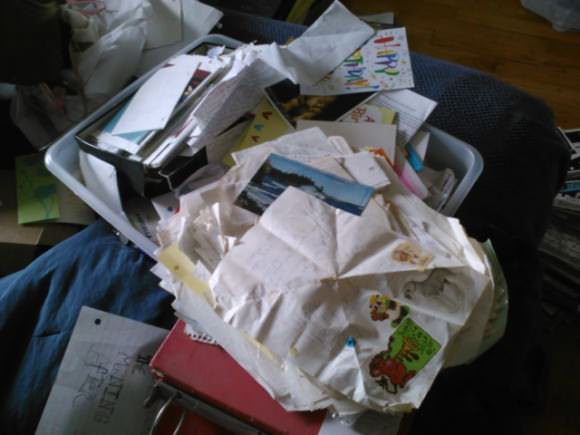 A bin of letters from my friends.

In junior high I got really into music and amassed tons of CDs and vinyl records. I really loved Nirvana and Hole, so I bought and saved every magazine I could find with them in it. I started making a Kurt Cobain collage between the windows in my bedroom, and added postcards from my friends, pictures of other musicians and celebrities, posters, and images I thought were just plain cool. By the time I graduated from high school, my entire room, including the ceiling, was covered. 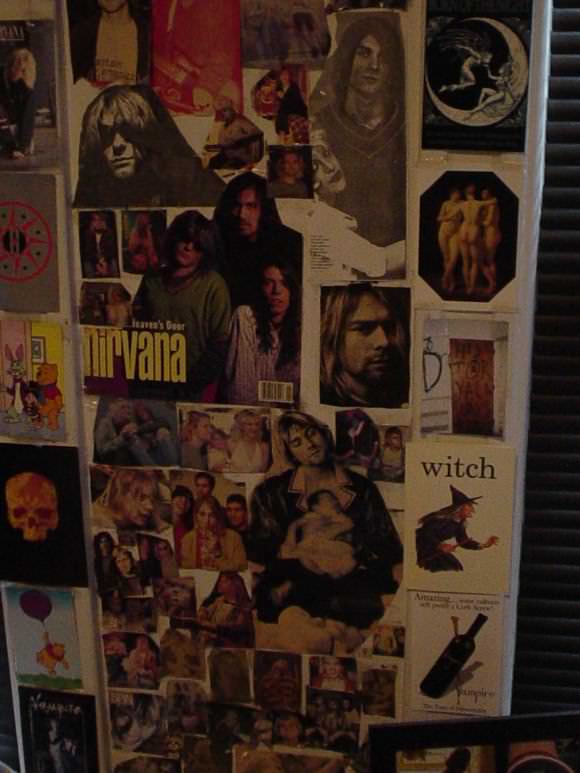 One of my high school bedroom walls.

It was a painful day when I was heading off to college and I had to select which posters and magazine clippings would accompany me to the place where only one wall was mine. Fortunately, my music collection—two crates of records, over a hundred CDs, and three cases of cassette tapes— and the clothes I wore regularly all fit into my dad’s car when he drove me to my dorm. Everything else would remain safe in my room at my mom’s house.

Then my mom moved. It was time for me to clean out my room. The whole situation was painful—the move was bringing up bad feelings about my parent’s divorce, and my mom was confronting her own packrat habits. Emotionally, she and I are a lot alike. When we are sad, we look for reminders of happier times—and an old birthday card, letter, or favorite shirt is the perfect reminder. Since she was moving to a smaller place, she was forced to let go of some of her reminders.

I dismantled my bedroom collage, put all the pictures in envelopes, and loaded those, along with my remaining boxes, into my car. My new place had three bedrooms, so there was plenty of space for all this stuff, and in this time of distress I felt like I needed it. The guest room of my house would become my new time capsule.

I know a lot of you are thinking hoarder. That’s a word I have resisted attaching to myself. But when I try to pinpoint an origin for my packrat tendencies, I come back to the year when my family moved from St. Louis to the Chicago suburbs. I was eight years old, and I never felt like I really found my place in our new city. Every time I made a good friend, she moved away. Everything seemed impermanent, liable to be snatched away from me at a moment’s notice. It was right after that that I started hanging on to things that reminded me of happy times so I could look at them during times that weren’t. When I think of “those people” on those hoarding shows, my first impulse is to distance myself from them as much as possible: Those people have a problem. I am just nostalgic. Then I think about how the voiceover on those shows is often like “Sue’s husband died and now she can’t bring herself to throw anything away” and I’m struck with a feeling of recognition. I started keeping things after an emotional trauma. And while I’m a long way from keeping the bodies of deceased pets in my freezer, I have to admit that saving every single thing I’ve ever read, written, or worn has something in common with that. It’s like a baby version of what is, let’s make clear, a serious mental disorder. I don’t envy anyone whose hoarding has made it difficult for them to live a normal life. And when I stop trying to distance myself from them, they become cautionary tales, showing me how important it is to get a handle on my own…OK, hoarding, and to adopt a healthier attitude toward my things. I got the opportunity to do just that a couple of weeks ago, when my husband and I moved from Chicago to Seattle.

I have been in love with Seattle since I first visited the city on spring break when I was in college, so I was really excited to finally get to live there. But the move also created major inner turmoil. I knew I needed to lighten my load for practical reasons—my new home is smaller, and it costs a lot of money to move things across the country—and I also just wanted to make a fresh start, to stop needing to own so many things.

When I walked into the guest bedroom—my “time capsule”—with the intention of purging its contents, I broke down crying.

Some of my magazines.

Part of the reason I’m a writer is because I want to preserve ALL THE MOMENTS. I’m afraid that if I let the things go, I’ll be letting the memories and lessons go with them. When my friend Marcel died, I was so glad that I’d saved the tiny doodle he’d made on the corner of a menu and taped to the ceiling of my car, so I could get it tattooed on me (I still kept the doodle though).

Change is scary, and moving is always hard. But I had the extra bonus of being terrified to get rid of all the objects that have helped keep me grounded for most of my life. To make it easier, I sent precious items, like my old zines, typewriter and vintage clothes, to friends who would get actual use out of them, and the rest went to thrift shops, completing a strange circle. 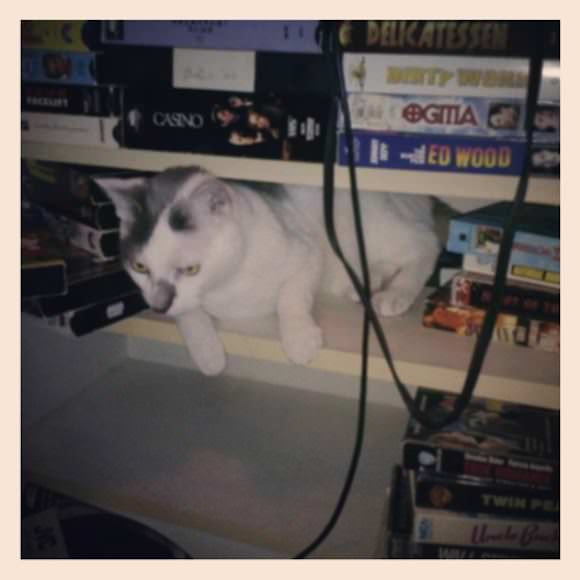 These VHS tapes went to the thrift store. The cat came with us to Seattle.

In the end, I’ve allowed myself one Memory Box of my own—a large plastic bin—and I’m also keeping my old letters. My mom, fellow packrat, actually came over to help me. She was able to be less sentimental than I was, since perhaps because she’d already gone through this process with her own house.
She wouldn’t allow me to have multiple versions of the same item; I had to choose one: That cardigan, for example, belonged to my grandfather, so I kept it and got rid of the one I’d bought for myself. Going through all of these things reminded me that I’ve survived these changes before. And when I texted friends and family members photos of notes they’d written long ago, or posted pictures of my old combat boots online, I saw that the memories would outlast the physical objects.