You can’t put a price tag on friendship, but you can put one on Tai’s transformation in Clueless.

Sunday Comic: The Best Song Ever #10 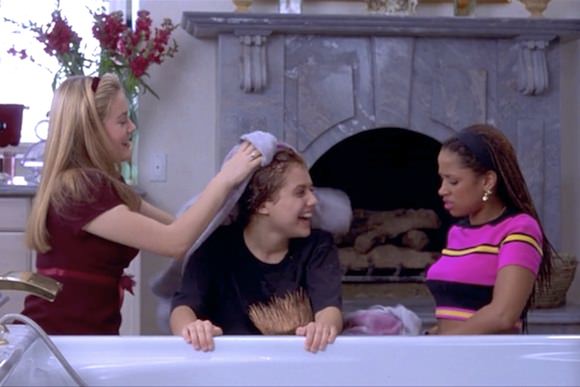 Clueless turned 18 this week, and to celebrate, Refinery29 calculated how much the makeover Cher and Dionne gave Tai might have cost in real life. If you’re like me and would watch a full-length film that was just one big makeover montage, then this is fascinating stuff. I won’t spoil the article for you, but MAN. Turns out it’s not cheap to give your friend an impromptu head-to-toe overhaul. 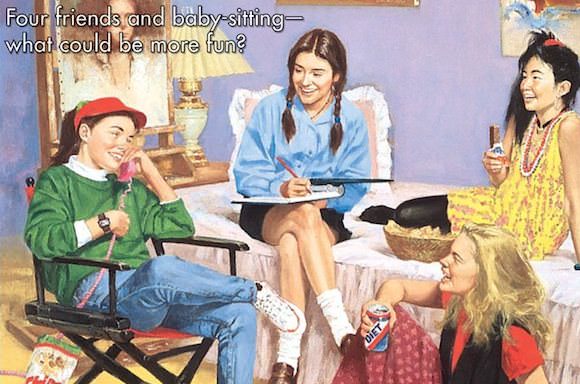 Design*Sponge put together a guide to living life like a member of the Baby-sitters Club that makes me want to drop everything and buy a bunch of scrunchies. 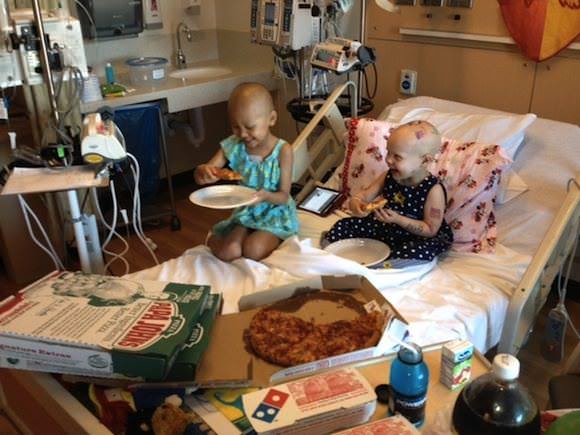 Once again, I learned that there is no situation that cannot be improved with pizza. My heart totally melted over the story of Hazel Hammersley, right, a two-year-old girl who is battling neuroblastoma. In a fun attempt to pass the time, she taped “Send Pizza Rm 4112” to the window of her Los Angeles hospital room with the help of her mom. Thanks to the help of the internet, so many pizzas were delivered that the hospital had to start turning them away!
Hazel 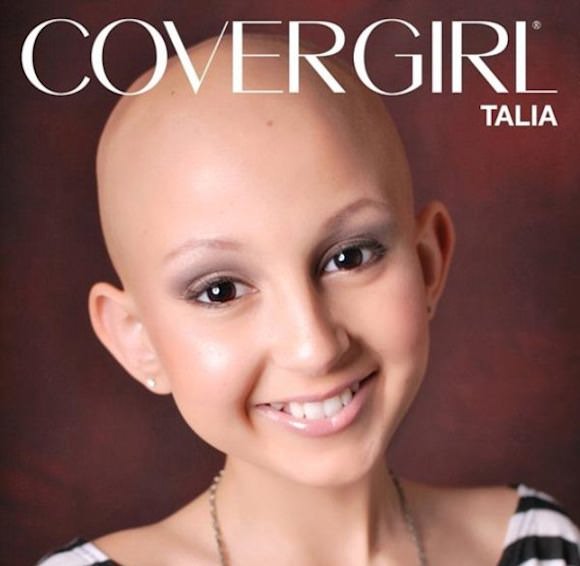 I was heartbroken when I heard that 13-year-old Talia Joy Castellano passed away Tuesday from cancer. I loved her makeup tutorials on YouTube (they taught me all sorts of cosmetic tricks and tips that I could never have done on my own, like how to make DIY makeup remover and an easy way to apply ice-princess eyeshadow). Even though chemotherapy caused her to lose her hair and she was frequently in the hospital, she never let her illness keep her from making her informative and hilarious how-to videos. She was an inspiration, and her makeup expertise and bubbly personality will be missed.

Sometimes I like to imagine the editorial meetings of publications such as, say, the New York Times. An older editor paces around a table. He looks out the window, deep in thought, and says: “We must write about…the Women.” Because goddamn, there sure have been a lot of articles lately about women and the things that are supposedly affecting them ALL right now—like having babies, “having it all,” hooking up, etc. Apparently, as a college-aged woman I should be especially concerned. But maybe there’s nothing to worry about? Maybe members of the mainstream media need to just chill out and rethink their “women’s stories?” At Salon, Anna North put it best by arguing that these close-minded stories about the Women are distracting from the really interesting ones about women. “I am not tired of stories about women’s lives, stories that tell me something real about how a particular woman thinks or works or loves,” she writes. “I am tired of ‘women’s stories,’ stories that are supposed to be about a problem that afflicts ‘women.'”
Rachael

I’ve lived with severe anxiety for most of my life. It’s hard to describe what it’s like to live in constant fear, but this article, by Lisa T. McElroy at Slate, gets it perfectly. At one point, McElroy idly thinks, while she’s in Kenya, that getting eaten by lions would be a decent alternative to worrying about her tenure application. While I’ve never considered throwing myself to the lions, I can sympathize. For people like us, any uncertainty or negative event can set off an adrenaline-fueled doom-spiral. (For instance, I’m currently in the process of adopting a kitten, and I’ve lost hours of sleep worrying about it. Literally hours.) In the article, McElroy finds some peace. But I assume that she, like me, will always struggle with those “little” worries.

On a lighter note, movie director Chris R. Wilson teamed up with the chatbot Cleverbot to write a movie. And then he filmed it. 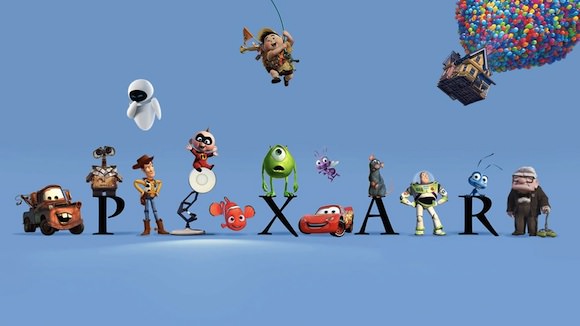 And speaking of movies: A guy named Jon Negroni analyzed every Pixar movie ever made to prove that they are all part of an overarching story. It’s a completely ridiculous idea, but it almost makes sense. The article might make you think he’s crazy, but it’s still a must-read for every Pixar fan. 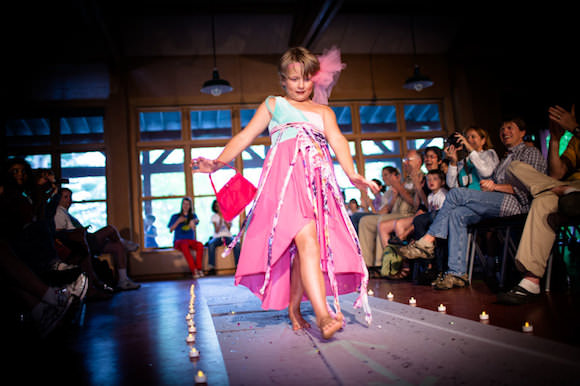 Self-expression, especially regarding gender, is near and dear to my heart. I’ve also been in love with summer camp for the past 16 years of my life, so I got fuzzy feelings when I came across this article about a summer camp for gender nonconforming kids and their parents. (The article states several times that it’s a boys’ camp and uses masculine pronouns throughout, but I’m using gender-neutral language because I don’t know how these kids identify.) Photographer Lindsay Morris took some amazing and adorable pictures, like the one above, of these little ones in their dresses and makeup, strutting down runways and dancing on stages. I’m so excited that a space like this exists for kids, and I can only hope that this camp expands and inspires others to create such welcoming environments for gender nonconforming people.
Lena

Like so many people, I have been angry and sad about the result of the Trayvon Martin case, which ended last weekend. (George Zimmerman, who killed Martin last year in Florida with a gun when Martin was unarmed, was found not guilty of second-degree murder and acquitted of manslaughter charges.) I’ve experienced the exact same emotions—but mostly anger—when I’ve heard people claim that the trial and the outcome had nothing to do with race. Yesterday, President Obama gave an address (the whole speech is in the video above) that included an emotional and exceptionally clear explanation about why race did matter in the case: “When you think about why, in the African American community at least, there’s a lot of pain around what happened here, I think it’s important to recognize that the African American community is looking at this issue through a set of experiences and a history that doesn’t go away,” he said. “Those sets of experiences inform how the African American community interprets what happened one night in Florida, and it’s inescapable for people to bring those experiences to bear.” 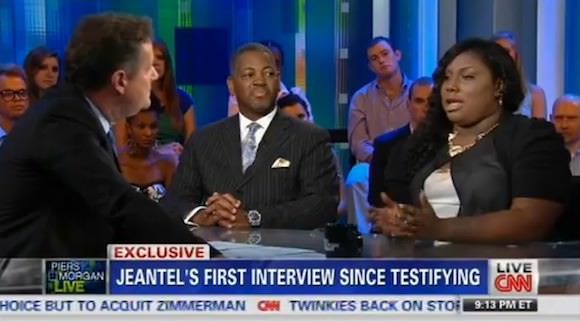 Over the past month, we’ve written a couple times about Rachel Jeantel, a friend of Trayvon Martin who testified in the Zimmerman trial, and the nasty treatment she got in some corners of the internet. Now that the trial is over, and she’s not under subpoena anymore, she can confront the backlash herself. Earlier this week on Piers Morgan Live, she stood up for herself—and for Martin again, like she did on the stand—with poise, grace, and a few of her own exceptionally clear explanations about her views on the case. ♦