You know what’s dumber than pretending to like something you don’t? Caring if someone else does. 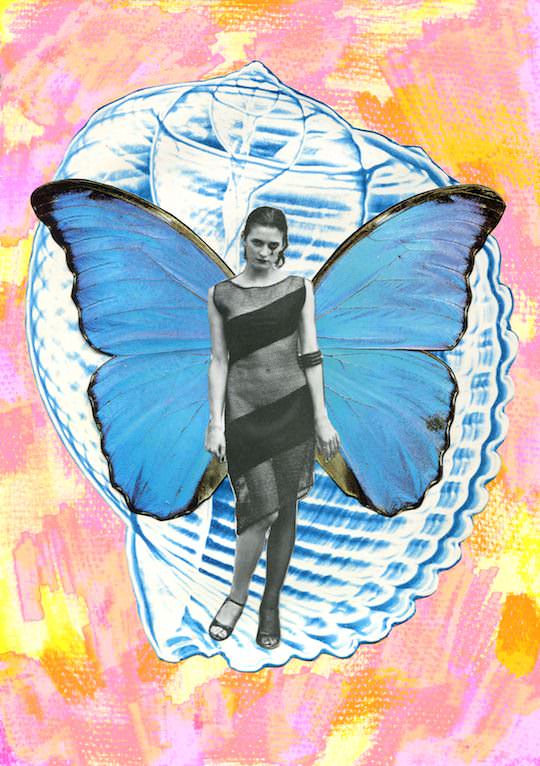 I’ve been a poser more than a few times in my life. In middle school, I pretended to like the same music as a boy I had a crush on just so we could have something in common, which is how I ended up with Coldplay on my iTunes even though we never got together. In high school, I tried to fake my knowledge of a cultural theorist just to impress a few seniors in my class. Posing was my way of feeling less awkward.

On the flipside, I’ve definitely called people out for being posers, like classmates who were suddenly into the same bands I had been listening to for YEARS or my friend who got really into fashion, a territory I had sort of claimed as mine. I’ve probably rolled my eyes at your Sex Pistols T-shirt, and even looked down my nose at girls who became feminists years after making fun of me for being one.

Being called a poser is an inevitable teenage rite of passage. Most of us try on different personalities in our teen years n an effort to find ourselves, but we’re still quick to cry foul when others do the same. We are simultaneously protective of our own identities and unwilling to let other people find theirs. Whether it’s a wardrobe switch (suddenly the preppy girl is goth) or a personality flip (pill-popper goes straight-edge), when someone changes their script others are quick to judge them for being insincere. But how are you supposed to learn what you like if you don’t try different things? If we’re lucky, we will spend most of our lives evolving—who’s to say which stage we go through is the “real” one and which ones are “just a pose”?

I mean, I get it: When we love something like a book or movie or video game or song or whatevs—truly love it, not just enjoy it sometimes—it’s usually because it touches something within our core. We identify with it—our identity has a soulmates-y relationship with it. So when someone with whom you seemingly have nothing in common suddenly is really into that thing too, in a way you’re just being loyal by protecting the thing you love from this obvious impostor. They couldn’t possibly identify with the same thing you do; their identity and your identity do not even live in the same universe. You want to expose them as a liar. Questioning the longevity of their interest in X or Y thing is a classic whistle-blowing technique: “Wow, it’s funny that you’re at this reading ,because weren’t you talking in class last year about how much you hated poetry?” you might say, or “Do you actually like Nirvana, or did you just buy that Kurt Cobain T-shirt because it looks cool?” BOOM. You have proved your mastery of this cultural domain. (In this case I’m using “mastery” to mean “acting like a jerky baby.”)

This behavior often starts in high school, a period when we are so fiercely protective of our identities that we instinctively dislike anyone who comes close to mirroring them. Thankfully, as most of us get older and more sure of ourselves, we let go of our need to act like some kind of cultural gatekeeper, making value judgments about people before we know anything about them. Sadly, some people never outgrow it. 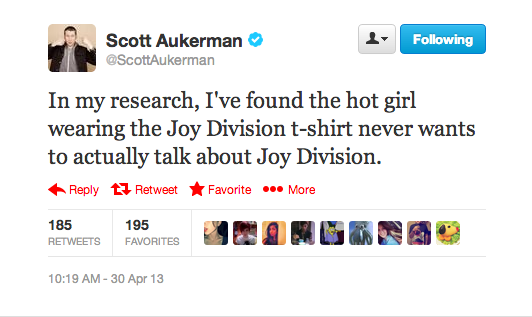 By espousing that it’s impossible to be a Joy Division fan AND good-looking AND a girl, Aukerman was basically calling any female in a Joy Division T-shirt who is attractive to him, personally, a poser. Women are posers by default, just by virtue of being women, and Aukerman automatically has the authority to judge who’s “real” and who’s “faking it” because I’m not sure why. (To be fair, these cases aren’t very hard to adjudicate: Is she a girl? Do I want to have sex with her? VERDICT: POSER. CASE CLOSED.)

For some reason (OK it’s sexism), girls are a popular target for this kind of authenticity trolling. TechLife editor Rae Johnston posted this awesome tweet after a dude called her out her for wearing a Bioshock: Infinite T-shirt:

The snarky coffee shop guy and self-appointed authenticity-police officer in question was obviously hoping to catch Johnston in the act of posing, but instead got his ass handed to him (and the game ruined, aw). This kind of thing happens a lot when female fans participate in comic-book conferences and gamer forums—we are accused of being Fake Geek Girls. Nerdery was never a purely male arena—girls have been made fun of for playing D&D, wearing glasses, and having braces for just as long as dudes have—so it’s weird that guys still cannot handle the presence of women in these spaces. A lot of guys assume that girls only pretend to be geeks to get attention—and it’s true that people often do things outside their comfort zone when they find someone attractive and want to be noticed by them (I repeat: Coldplay in my iTunes). Aside from the larger point of “who cares,” attributing that attitude to a considerable segment of the nerd population based solely on gender is the very definition of prejudice. It’s also pretty stupid for a notoriously shy, largely male subculture to actively discourage women who share their interests from coming to them. Not that we’re there for them, of course, but you would think they would’ve thought this through a little.

Poser policing isn’t restricted to the male-dominated worlds of comedy and gaming; in academic and professional settings women are constantly told we don’t know what we’re talking about, even when we know as much as or more than our male counterparts. Rebecca Solnit wrote about a conversation she once had with a man who insisted she didn’t know as much about photographer Eadweard Muybridge as he did. He haughtily quoted a recent New York Times best-seller he had read about Muybridge, showing off his superior expertise. Little did he know Solnit wrote the fucking book he was talking about, and—plot twist—he hadn’t even read it! What a posing liar!

Having been on both sides of this divide—poser and poser-pointer-outer—I’m glad that none of the people I called out ever slapped me in the face with the business end of the truth like that, but I’m also a little sad that I wasn’t clever enough to come back at my accusers with comparable badassery. Not that I ever got it so bad—pretending to love Coldplay for the attentions of a boy is about as far as I was willing to go, but it could have turned out much worse. Or it could have turned out great! What if my feigned love for Coldplay was an on-ramp to a lifelong, heartfelt passion for Coldplay? How this soul-stirring, unshakeable love started shouldn’t matter, should it? Are we now disqualifying women for getting into something the “wrong way”? Do we essentially have to present some sort of long-form fandom birth certificate as proof of our authenticity?

Ironically, the worst I ever got it from the poser police was over an incident where I was actually not posing at all. They couldn’t even see how real I was, man! I wrote about my love of R.L. Stine here on Rookie a year and a half ago, and a few months later I found—I honestly can’t remember how—an ENTIRE LiveJournal comment thread making fun of me. According to the commenters, I was too young to have even heard of R.L. Stine, and therefore I was adopting a nostalgia that I had no right to. Never mind that I grew up on the Goosebumps series and that R.L. Stine doesn’t belong to any one generation and that it’s not like you’re only allowed to enjoy art that came out when you were a specific age. (I hope that none of the people in that forum ever reads Jane Austen. I hope that they have never seen The Godfather. If I ever catch one of them listening to David Bowie or Mozart, I will call out their poser shenanigans.)

I’m happy to report that my concern about what other people are into and the manner in which they enjoy it vanished when I got a little older and stopped caring so much what anyone else thought of me. I realized there is no cultural value in liking something first, and that I can’t make judgment calls on people for coming to a shared interest in their own way. To the poser police, I say: You are not a toddler, so you can’t expect to keep getting rewarded for doing something for the first time, and you sort of have to use the social skills you’ve developed since then to let other people play with your toys. Acting like there’s a right way to like something is snobby, petty, and mean, and no one makes friends that way. It’s OK to give a person some space while they figure out who they really want to be instead of policing every pleasure they manage to eke out of life. Save your energy for making fun of things that are actually important. ♦