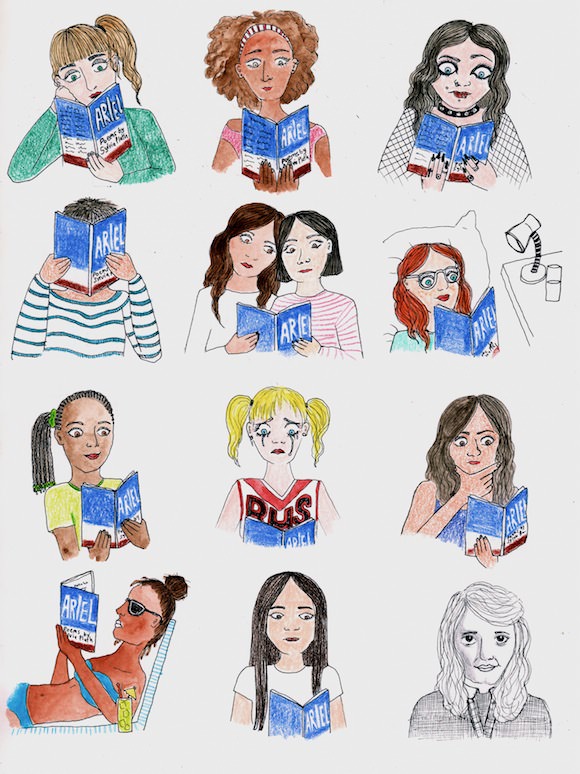 All your beauty, all your wit, is a gift, my dear,
From me.
—Sylvia Plath, “Soliloquy of the Solipsist”

Reading Sylvia Plath’s Ariel is high on my personal list of rites of passage for moody, introspective, lit-prone teen girls. The way I found this book when I was 13 was pretty simple: I went to the library, headed for the poetry section, and checked out every book with an unfamiliar female name on the spine. I had written poetry since grade school, and thought it was something I might do with my life. I wanted to know what “real” poetry—poetry by grown women—was supposed to sound like.

As far as methods of literary discovery go, this one is highly recommended. I turned up more than one writer that I wouldn’t have otherwise read—Amy Gerstler, Jane Hirshfield, Sandra Cisneros—but I also got to encounter the books themselves in a remarkably direct and equitable way. I had no idea whether the books I picked up were cool or uncool, famous or obscure, fashionable or old-fashioned.

There is probably no writer that benefits more from being encountered this way than Sylvia Plath. Her personality—or people’s idea of her personality—tends to dominate all discussion of her, the fact that she committed suicide so often overshadowing the work itself that it’s almost impossible to read her stuff without being influenced by what you know of her life story. Plath has been fetishized, mythologized, and cast as the lead in a thousand critics’ personal psychodramas: She’s the vindictive, clingy ex-wife who killed herself just to make poor Ted Hughes look bad; the innocent martyr destroyed by Hughes’s male domination; the proto-feminist ’50s girl gone bad, who wrote a novel about birth control and raged at male domination in her poems. Some say that her ambition and her work ethic betrayed a giant ego that alone would have driven her to death; others that her madness was what made her a great poet, as if her only real accomplishment was getting so deeply bummed out that she started writing books. And some people—I am not kidding here—argue that she just had really bad PMS. All of this attention means that most readers will already have an idea of who Sylvia Plath is before she gets the chance to tell them. It’s a shame—Ariel is a powerful and terrifying work without any backstory.

Plath had two children under the age of five in 1962, when she wrote the poems that make up Ariel, and many of those poems are kind of childlike—the moon has feelings, trees talk, and some of the titles even call back to childhood. But all of that little-kid imagery is used in the service of poetry about wounds, blood, death, genocide, and hating your parents. In the poem “Lesbos,” Plath introduces kittens so she can talk about killing them:

You have stuck her kittens outside your window
In a sort of cement well
Where they crap and puke and cry and she can’t hear.
You say you can’t stand her,
The bastard’s a girl.
You who have blown your tubes like a bad radio
Clear of voices and history, the staticky
Noise of the new.
You say I should drown the kittens. Their smell!
You say I should drown my girl.
She’ll cut her throat at ten if she’s mad at two.

Fifty years later, this is still shocking stuff. I can recall my confusion at seeing the words puke and crap in a poem when I first read them; it was worlds away from the decorative, delicate language I thought poets were supposed to use, an eruption of nasty, forbidden, real-world talk in a supposedly highbrow space. The mood of Ariel shifts rapidly and often, from pretty and fragile to rage and terror. This tumult of emotions was, to me, very much what it felt like to be a teenage girl. A few years earlier, I’d been worried about choir recitals and Christmas presents; at 13 I was worried about sexual assault and anorexia. The ugly real-world stuff kept cropping up. There was no way to deny it, no way to avoid being scared or angry. I knew nothing about Plath’s life story, but I instantly recognized this powerful language that redefined what I believed poetry could be. You can imagine my surprise when, five years later, I took my first college course in creative writing and found that Sylvia Plath was a laughingstock.

I had expected her to come up in my college classes; in my mind, she was the greatest poet of the 20th century. This was partly due to my own odd reading habits—picking stuff at random out of the library doesn’t give you a great sense of the canon. I had an admittedly immature adulation of her; I didn’t realize anyone COULD say a negative thing about her. We spent part of one class session on Plath, reading her poem “Daddy” and listening to the marvelously spooky BBC recording of Plath reading it aloud.

I have always been scared of you,
With your Luftwaffe, your gobbledygoo.
And your neat mustache
And your Aryan eye, bright blue.
Panzer-man, panzer-man, O You—

Not God but a swastika
So black no sky could squeak through.
Every woman adores a Fascist,
The boot in the face, the brute
Brute heart of a brute like you

“She’s widely imitated,” the professor said diplomatically, “but you probably, uh, shouldn’t try to imitate her.” The class erupted into giggles and ironic smirking; we talked about whether Plath had the right to call her father a Nazi (as she does in the poem), or whether it was unfair of her. I tried to come up with an answer, something about how the poem uses political imagery to help us take the personal violence more seriously, even though I had absolutely no ability to verbalize this in a way that sounded intelligent. What I wanted to say was that this poem, when I first read it, was life altering. It resonated with me. My father and I had a bad relationship, but I thought, as his daughter, that it would always be my job to love him and forgive him in spite of that. I believed I wasn’t allowed to get angry at him. Realizing that a woman could say these things, both aloud and in print, and witnessing the primal force of Plath’s rejection of Daddy—slamming the insults down over and over, repeating brute three times in two lines, even calling him Satan—was deeply liberating.

I fumbled while trying to explain this feeling in class, leaving out my personal story, and then we all went back to giggling about how mean and crazy and self-absorbed Sylvia Plath was, and looked down on all those weird girls who tried to imitate her. But I was unsettled. I felt that something had gone very wrong. I’ve since realized that Plath is part of the literary canon, and I think that this class could have been more inspiring, but since this professor didn’t like Plath it wasn’t overwhelmingly useful to my development as a writer. The rest of the class may have known to think that Sylvia Plath, and the girls who tried to write like her, was a well-worn punchline, but it was a shock to my system.

They didn’t know that I was one of those girls who had imitated Sylvia Plath. A lot. For years. I wanted that kind of force, that kind of power, and I wasn’t practiced enough as a writer to find power in my own words instead of hers. My poems from that time are horrible—derivative, melodramatic, full of faux-goth imagery that is often (inadvertently) hilarious. I thought mood could be established simply by using the word blood a lot—much of what I wrote in those years sounds like a pretentious ad for tampons.

Sylvia Plath wasn’t always a great poet. For most of her life, she was just a writer who turned out uneven, and sometimes unfortunate, poems. Even when she was relatively well published, lots of people slammed her for writing “pastiches,” which just means having an artistic style that imitates other artists. Sometimes she sounded like Wallace Stevens or Dylan Thomas, and she wrote short-stories for a ladies’ magazine as a way to try out a different writing style. Before Ariel Sylvia Plath was trying to find her own voice, which she eventually discovered by doing imitations, for better or worse, of writers she admired, much in the way that many young writers now begin their own evolution by imitating her.

It’s possible that people who try to write like Plath are vilified more than imitators of other widely imitated literary figures—Charles Bukowski, F. Scott Fitzgerald, or even Joan Didion—because the literary canon has been dominated by men. Didion is just as personally revelatory and grim as Plath, but she has a cool, controlled style that tends to make it feel less intense, less “gushy” and more intellectual. That makes her feel safer to people who are uncomfortable with the stronger, “out of control” expressions of female emotion. Plath often sets off something primal for young women. She expresses powerful, taboo emotions—rage, sorrow, the desire for revenge—in a way that often encourages those young women to take their own inner lives seriously, and to spend quite a lot of time working out how to express them. Those emotions can be powerful and liberating. When I read “Daddy” for the first time, what mattered was not was not the circumstances of Plath’s anger at her father, or the “fairness” of her rage, but my circumstances, and my anger.

This is not to say that there aren’t real criticisms to be made when it comes to Plath’s work, and I realize that women and feminists are often the ones to make them. But making fun of “the girl who thinks she’s Sylvia Plath” is making fun of the girl who takes her inner life seriously; seriously enough to write about it in some pretty stark terms, without feeling embarrassed. Since Plath took her own life out of some sense of powerlessness, the only real power she has left rests in her ability to inspire more work.

When I was wandering through the library, grabbing anything with a female name on it, I was really looking for teachers. More important, I was looking for women to tell me that writing was possible. I needed evidence that someone like me, a young girl, could one day be a serious writer, and that female voices matter. Sylvia Plath’s poetry was pretty damn compelling evidence of all that. ♦