Return to the Scene

Reboots and remakes, copies and cults in some of our favorite movies and shows.

A Complete Guide to the Olsen Twins' Movies

The Source Family (2013)
PLEASE SEE THIS MOVIE AS SOON AS POSSIBLE. It is a documentary about a ’70s cult of Southern California souls seeking refuge with Father Yod, an all-American boy turned yuppie turned hippie. You WANT to be able to watch it and be like, Look at how awful he is, look at how foolish they are, how could they get sucked in? But within 10 minutes you’re like, Oh man, if someone approached me like, “Hey wanna wear flowy dresses all day and get a name like Sunflower?” I would totally be down. I could be perfectly happy just watching The Source Family all the way through on mute, that’s how beautiful all the original footage is (Father Yod had assigned one member, Isis Aquarian, to document EVERYTHING). Watching it on non-mute, however, has given me lots of good anecdotes to share when I socialize, as long as I’m around people who don’t mind hearing about the most elaborate midlife crisis ever, or how Bud Cort from Harold and Maude was once involved with this “spirit commune,” as cult members called it. Some parts are kind of a huge bummer: This guy who once preached “one man, one wife” suddenly decided he wanted like 13 teenage wives; and followups up with former members show that only about half of them seem to have truly moved on (though no one seems to have any regrets). You kinda start to think there must have just been something unique about that group of people, regardless of Father Yod’s influence/manipulation. And not just because they smoked weed every day as a “ritual.” —Tavi

Footloose (2011)
This is a little bit controversial, but I’m going to go ahead and say it anyway: I think the 2011 remake of Footloose is just as good as the 1984 Kevin Bacon classic, if not a teensy bit better. The plot is exactly the same—a city boy moves to a tiny town in which dancing has been outlawed and promptly falls in love with the preacher’s daughter. The dance sequences are terrific—director Craig Brewer did the right thing and hired dancers who could (mostly) act instead of actors who could (kind of) dance. Julianne Hough, of Dancing With the Stars fame, is convincing as a slightly naughty high school vixen, and the lead, Kenny Wormald, is so adorable with his thick Boston accent that he could have said all of his lines backwards and I wouldn’t have minded a bit. One of the best things about the original Footloose was the kickass soundtrack, and Brewer, in another genius move, got people like Blake Shelton and David Banner to remake some of that movie’s songs for his own soundtrack. This movie is great. You’ll be dancing on the couch, I swear. —Emma

The Parent Trap (1961)
Hayley Mills plays both Susan Evers and Sharon McKendrick, twins who meet at summer camp with no prior knowledge of each other’s existence—prompting the greatest line in cinematic history: “The nerve of her! Coming here with your face!” Of course they hate each other at first, but after a while they get to talking and figure out that they’re not freaky doppelgängers but actually sisters separated in infancy when their parents divorced. They hatch an elaborate plan to reunite their parents by pulling the ol’ twin-sister switcheroo, which requires each girl to learn to perfectly imitate the other and to know the ins and outs of her life. The Parent Trap is perfect in every way, and it includes the best movie makeover of all time! I know the Lindsay Lohan version is good, too, but the original is still the greatest! —Pixie 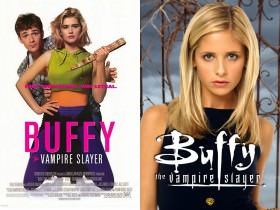 Buffy the Vampire Slayer (movie, 1992; TV show, 1997–2003, the WB/UPN)
Annoyed that the blond teenage girl was always the victim in horror movies, Joss Whedon wrote a screenplay where she’d be the one kicking the most ass. That script, Buffy the Vampire Slayer, was made into a mediocre movie in 1992, having strayed a great deal from Whedon’s original vision. It isn’t necessarily bad—the campy humor is fun—it just isn’t very good. In 1996, Whedon revamped Buffy as a TV show, this time retaining creative control. It was still campy (especially the first season), a little goofy, and a lot of fun, but way, way sharper. The tone was darker, the plots were tighter, and the mythology surrounding vampire hunting was meticulously crafted. This show was life-changing for me! There is a moment in season two—and I don’t want to give it away, but it involves Buffy grabbing the blade of a sword with her bare hands—that made 13-year-old me think, That’s it, I’m a feminist. The show stayed pretty strong for a full seven seasons, and really deconstructed and feminized the superhero trope. What I like most about the original movie is that it shows how bonkers a great idea can go in the wrong hands, and makes you appreciate the genius of the TV show even more. —Anna F. 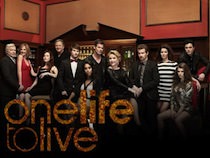 One Life to Live (original, 1968–2012, ABC; revival, April 2013–present, Hulu/iTunes/OWN)
I was obsessed with the ABC soap opera One Life to Live for many years, so I was bummed when it was canceled a couple of years ago, and pumped when it was rebooted on Hulu (and iTunes, and OWN) in April. For the most part, I haven’t been disappointed. The production quality is just as good if not better, and since it’s airing on the internet and cable instead of network TV, they can push the boundaries a bit more, making the show edgier and more realistic (sometimes you really do just need to swear!). The cast is smaller and it’s 30 minutes long instead of an hour, but that actually means less filler and more drama! My only complaint is that I don’t know why all the girls on the show are throwing themselves at Matthew, who is a douchey deadbeat dad. But the mystery surrounding the battling brothers Todd and Victor, the return of my favorite soap couples (Todd and Blair, David and Dorian, and Bo and Nora), and a surprisingly awesome performance from Jersey Shore’s JWoww as a sassy bartender have kept me invested—and you can’t beat the convenience of being able to binge-watch on Hulu whenever you want! —Stephanie

Breathless (1983)
The American remake of Jean-Luc Godard’s 1960 French New Wave film Breathless takes place in ’80’s L.A. instead of ’60s Paris, and instead of an American girl abroad (Jean Seberg), the leading lady is a French UCLA student named Monica (Valérie Kaprisky). A drifter named Jesse (Richard Gere) is on the run after stealing a car and shooting a cop; he hides out at Monica’s apartment and tries to persuade her to run away to Mexico with him. She’s into it until things get serious with the law. Some larger plot points aside, this movie has totally different vibes from the original. Let’s just say the American version takes those long talks in bed and turns them into steamy sessions with no talking; and in the place of Godard’s exquisite black-and-white this version is all bright lights, cheesy pink furniture, and Jerry Lee Lewis tunes. Like all my faves, I found it in the free section of Xfinity OnDemand. —Monika 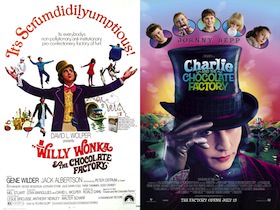 Much Ado About Nothing (2012)
William Shakespeare’s play Much Ado About Nothing has always been one of my favorite romantic comedies. I enjoyed the 1993 Kenneth Branagh movie version, but as a huge Joss Whedon fan, I couldn’t wait to see his 2013 take on it. Instead of doing a straight-up period piece, Whedon staged the play, with its original text, in a modern setting (his own Los Angeles home, which is OMG gorgeous!) and filmed it in black-and-white, which I thought was perfect because it felt classic and completely up-to-date at the same time. Even my husband, who is usually intimidated by Shakespeare because of the language, enjoyed it immensely and was laughing his butt off. Amy Acker and Alexis Denisof steal the show as Beatrice and Benedick; not only were they hilarious (people who shipped Fred and Wesley on Angel will especially love seeing them together), but Acker’s delivery of Beatrice’s “O that I were a man!” speech was the best performance I’ve seen! The additional dramatic touches and new spin on Beatrice and Benedick’s relationship instantly made this my new favorite Shakespeare play on film. —Stephanie ♦