Get it with a five-finger discount.

Literally the Best Thing Ever: The New Clones 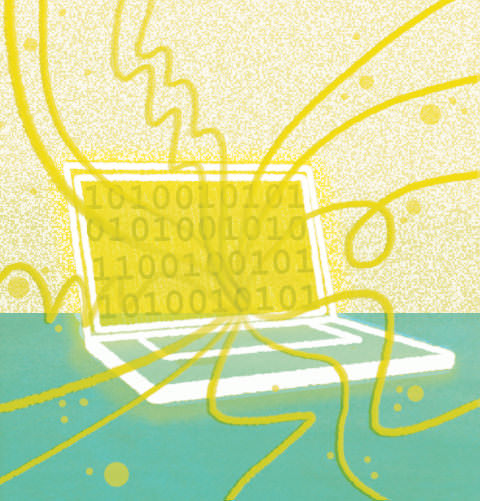 I’m about to show you how to be a total badass rebel and fight the power—just by changing what computer software you use. Computers are everywhere and everyone uses them, but not a lot of people seem to wonder why and how they work. The computer companies like it this way—they don’t want us to think about computers, they just want us to spend all our money on them. How did this happen? How did the computer industry get so much power over us, and what can we do to get some of that power back? It’s all about educating ourselves to make better choices. We’ve already covered hardware and how you can make your own computer, so let’s dig into what makes your computer do the things it can do: software.

First, a few definitions: Hardware is the physical stuff that makes up your computer: the processor, memory, keyboard, monitor, etc. Software, on the other hand, is basically an instruction manual for your computer, telling it what to do. Your operating system, the browser you’re reading this on right now, your word processor, and all your games and apps are software. The instructions inside that instruction manual are called the source code. When you are “writing” a program, you are writing the source code. Here’s an example of some source code for a small program that tells you if a number you’ve entered is odd or even:

An operating system is a cluster of software that runs the whole show, managing the hardware and the software and getting them to work together efficiently. Windows is an operating system; so are Apple’s Mountain Lion, Snow Leopard, etc.

When the first personal computers were being developed in the 1960s and ’70s, computer users were computer lovers who had fun testing the limits of computing and programming. They were hackers—which doesn’t mean people who illegally modify computer software or break into secure systems; the term was originally used (and still is, by tech enthusiasts and other badass rebel types) to describe people who are just interested in modifying computers to make them run better. Back then, if you wanted your computer to do something, you had to write the source code yourself. Very few people were thinking about making money from coding; it was just about exploring and learning. So what happened?

First, in the early 1970s, everyone started using a new operating system called UNIX. The upside to this system was that it allowed multiple simultaneous users (so even though a university might have only one powerful computer, different people could use it from terminals all over campus at the same time) and it made writing reliable code easier. The downside was that the system was owned by AT&T, and AT&T realized they could make a ton of money by licensing the software. This started the whole idea of a software license, which you often have to buy once a free trial on a piece of software is over. You don’t really OWN licensed software when you buy it—you are simply purchasing the right to USE the software based on the maker’s specific terms. If you owned the software, you could look at the source code, which would empower you to play around with the program and modify it to suit your needs. Licensing turns the computer user into a computer consumer, with no power to change the code in any way.

In the ’50s and ’60s, the American telephone company Bell System licensed EVERYTHING—the telephone was theirs, the signals were theirs, and even the words transmitted through their wires were theirs—and so any word that was spoken to you over the phone didn’t legally become “yours” until it left the Bell System mouthpiece and actually entered your ear!

The new MacBook Pro is the least hackable computer ever made, since Apple intentionally made it impossible to upgrade or replace the hard drive or the RAM, or even change the battery. Many of the services we use (like Facebook and Gmail) restrict our freedom by not being transparent about selling our information and making money off of us, but they won’t let us tinker around with their tech. We agree to these stipulations when we accept the legalese on their terms and conditions forms.

In the 1980s, a group of computer activists joined forces to fight for “free software” (free as in freedom, not as in no price). The free software movement was started by a programmer named Richard Stallman in 1983, and its basic ideology is that all computer users have an ethical right to access source code. A lot of programmers think Stallman is too radical and weird; he will only use the Leemote Yeelong laptop because it runs on 100% open source software, and when Steve Jobs died Stallman notoriously blogged, “Steve Jobs, the pioneer of the computer as a jail-made cool, designed to sever fools from their freedom, has died.” In 1998 a new group formed called the Open Source Movement (under the umbrella group Open Source Initiative). It’s basically the free software movement minus all the dogmatic philosophy; all the OSI wants is access to the software source code.

If you have the source code and you know what you’re doing, you can tinker with any program to make unique improvements and see exactly how the program interacts with your computer. For open-source proponents, it’s about building on other people’s ideas and sharing your own, collaborating to create software with more flexibility, fewer bugs, higher reliability, and lower cost. If you’re interested in using open-source software on your own computer, here’s a quick rundown of some alternatives to popular software you’re probably using already. These programs are easy to find and download, and they often work better than the proprietary versions. You don’t need to learn code to use any of these programs, and it is good to support free software!

Microsoft has to add new features to their software in each new version to keep consumers coming back, so the interface just gets crazier and crazier to fit everything in. If you find this annoying, then LibreOffice is for you. It strips Office applications down to only the essential features so you can just focus on your work and still save in any format you need (.docx, .doc, .pdf, etc.). Here’s an illustrative comparison:

Microsoft Word toolbar (What are all these things? I just want to write!):

Comparing GIMP with Photoshop is like comparing a Best Western with the Four Seasons—both basically have the same stuff, but one is clearly way better than the other. GIMP has almost all the same tools as Photoshop, but they just don’t work as well. If you’ve never used Photoshop before you won’t know what you’re missing, but if you learn Photoshop first and then try using GIMP, it can be a very frustrating experience. The main problem with GIMP is that it’s just as complicated as Photoshop, but not as powerful. If you’re looking for a simpler, free version of Photoshop I recommend Pixlr, a browser-based Photoshop clone. Pixlr is not open source, but it is free (while Photoshop costs $700!).

These are both vector graphics editors, which are useful for making digital art, graphic design, logos—but they are different in many ways. Inkscape shines in its simplicity: It’s powerful and has lots of features, but it’s also easy to learn and use. Illustrator is more difficult to navigate if you want to do simple things like distorting a shape, but it has Inkscape beat if you want to print with true CMYK and Pantone colors. If you just design for the web, Inkscape should meet all your needs.

If you are concerned about being tracked, having ads targeted at you, or any of the other ways that Google gets and uses your information, you may want to consider DuckDuckGo. It doesn’t have all the bells and whistles of a Google search, but it gets the job done without snooping around.

Firefox is the only easy-to-use and -install open-source web browser out there. Luckily, it is also a great browser. One of its major benefits is that because it’s open-source, people are constantly making add-ons for it. (An add-on is an additional [usually free] piece of software that adds features to your browser.) Greasemonkey, Adblock Plus, and Video DownloadHelper are all great add-ons developed for Firefox (Adblock Plus has also made it to Chrome). Internet Explorer has always kind of sucked, and Safari isn’t much better. Chrome is fast so I still use it, but only in “incognito mode” so Google can’t track me. Firefox is a bit slower than Chrome, but they are fighting hard to keep open standards on the web. Open standards are important because they help make the internet an even playing field, allowing anyone to understand and develop websites and apps no matter what browser, hardware, or software they use. Firefox also has a mobile operating system coming out that will allow more people in the developing world to use smartphones and web-based apps.

I’m not saying you’re evil if you choose to use licensed corporate software instead of open-source, or that you’re a mindless consumer. But if you choose to stick with Windows or OSX or what have you, it should be just that: a choice. The whole point of freedom is that it’s up to you! ♦