It’s good to be the King. 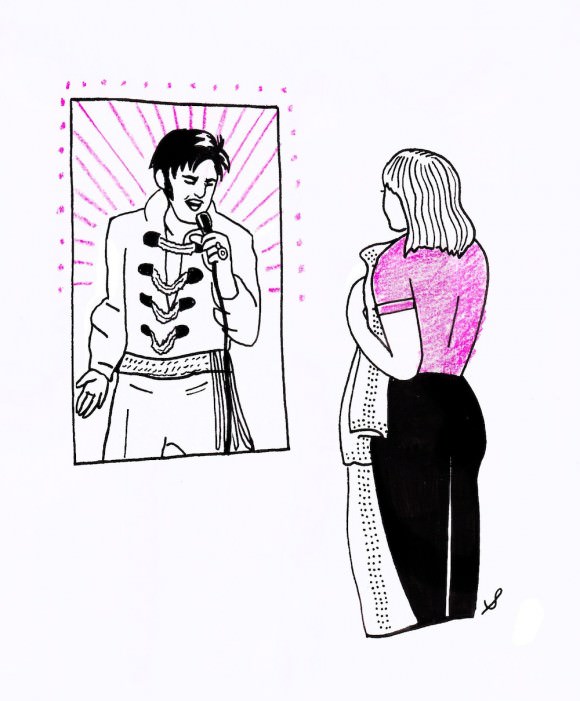 If you could choose to be anybody in the world besides yourself, I can see why you might go with Elvis Presley. There are myriad reasons for this, but here are the major ones: He’s one of the most beloved cultural figures of all time. He could dance and sing like a grunty Southern angel of pure gyrating sex. He very shirtlessly starred in scads of supremely chintzy Technicolor movies called, like, Clambake (that one took place on the beach and featured a song also titled “Clambake,” the lyrics of which were about—what else?—clambakes). And, of course, he got to wear those jumpsuits—have I ever been as covetous of any other article of clothing as I am of the King’s amply rhinestoned one-piece marvels? Other than superheroes, I’m pretty sure no one else could ever look that dashing and natural in a red cape—which isn’t to say that there aren’t plenty of people who try. Although my adoration for Elvis himself is massive, never-ending, and true, even more of my heart cells are dedicated to the people who imitate him—those whose own Elvis worship is so overwhelming that their very being begins to meld with his. I am talking, of course, about Elvis impersonators.

There have been many kinds of Elvis impersonators over the past half-decade or so: There are perfectionist Elvii who would inject peanut butter and bananas into their veins if it could somehow alter their actual DNA to more closely resemble his, and also more abstract ones who embody the idea of “Elvis” through their own entirely interpretive ideas of what he represented: queer Elvises, biologically “female”-bodied Elvises, and Elvises of color. There are the ones who look like him but don’t sound like him, and vice versa. There are low-budget Elvises that perform weddings in all-night Las Vegas chapels, as well as ones that won’t come out of their dressing rooms for less than a few thousand dollars per single performance. As even Uncle Jesse from Full House knew, anyone can be Elvis. All you have to do is adore him (and maybe put on a cape, but no pressure). John Stamos wasn’t the only important uncle to slip into Elvis drag: Ryan Gosling, who rivals Elvis as one of the greatest dreamboats the world has ever known, has said he was inspired to become an actor by his own Elvis impersonator uncle. You basically have to show mad respect for this thoroughly Bedazzled and pompadoured art form—without fake Elvises, your life wouldn’t have RG’s disgustingly beautiful face in it, and what kind of life would that be at all?

Out of all of this world’s great many Elvis impersonators, my ultimate favorite happens to be the one Elvis himself also loved most. When I was 16, I discovered Andy Kaufman, who was a comedian, my spiritual husband, and the king of ersatz Kings, through YouTube videos of his appearances on Saturday Night Live in the 1970s. His comedy was deeply brilliant and weird and had nothing to do with straightforward joke-telling or slapstick. I immediately fell hard for his work and watched everything else of it that I could click on. In some particularly dope Andy K. videos, he starts out by earnestly delivering botched impressions in a terrible made-up accent. He says hello, introduces himself as a president or other famous type, then says thank you and moves on to the next non-impression. Then, for his final imitation, everything changes. He says, “And now I would like to do the Elvis Presley,” in a funny little accent, turns around, quickly fixes his hair and clothing. When he turns back to the crowd, he is Elvis.

The bumbling impressionist is totally gone—instead, he sounds, moves, and has somehow transformed his persona to the point where he even looks exactly like him. When he sings “Don’t Be Cruel,” it’s crazy, unexpected magic, just like the performances of Elvis doing it himself are. Andy’s impersonation is easily one of my absolute favorite things in the world.

But not all poser Presleys are as strict as Andy Kaufman was when it came to trying to perfectly emulate Elvis’s actual presence, nor do they pretend that he was a flawless dude, as I know I’m personally prone to doing (see my initial sex angel remark above). Elvis Herselvis, aka Leigh Crow, has been doing a drag king act as Elvis since the early ’90s, and sometimes includes winking acknowledgements to the extensive drug use that eventually killed the King. This isn’t to say she doesn’t respect him, or that he’s less important to her than he is to other, more staunchly reverent impersonators. In an interview with Wicked Women magazine, Crow described how becoming her own version of Elvis helped her become more attuned to her identity: “Being able to put on a male persona and play Elvis has definitely helped me to find out who I am…because of this I now feel very comfortable going out socially in femme drag.”

El Vez, a Mexican-American Elvis impersonator whose name translates as “the time,” is another of the best performers out there. While his voice is an exact match for Elvis’s in his covers of the King’s singles, the lyrics of the songs themselves feature stylistic tweaks that convey a Chicano-power message. The chorus of “Dixie Land, An American Trilogy” become “Look away, East L.A.” “In the Ghetto” morphs into “En El Barrio” and details the experiences of living in low-income Latino neighborhoods, and “Suspicious Minds” becomes “Immigration Time,” an indictment of U.S. immigration policies. As El Vez himself says in the Elvis-impersonator documentary Almost Elvis, “Elvis Presley is the American dream, but you don’t have to be a white man in your 40s to be a part of the American dream.” El Vez’s interpretation of Elvis brings with it an expanded idea of what American glamour means, and of who is considered worthy of embodying it. Needless to say, it totally rules.

Usually, when someone tells me they’re into something, that’s exactly what they’re doing—telling me, in words. Elvis impersonators communicate their unique, subjective kinds of love for the King by actually living inside of them, and it’s an incredibly special thing to see. They’re turning their brains inside out and slathering them onto their bodies for the rest of us to see. They physically represent the idea that many different people can appreciate a single artist and his or her work in vastly diverse ways, and that each Elvis impersonator’s relationship to the man whose identity they are swaggering around in is very much their own. It’s a specific and beautiful experience to absorb all the distinctly personal reactions to art that Elvis impersonators make into public spectacles. Long live the King(s). ♦