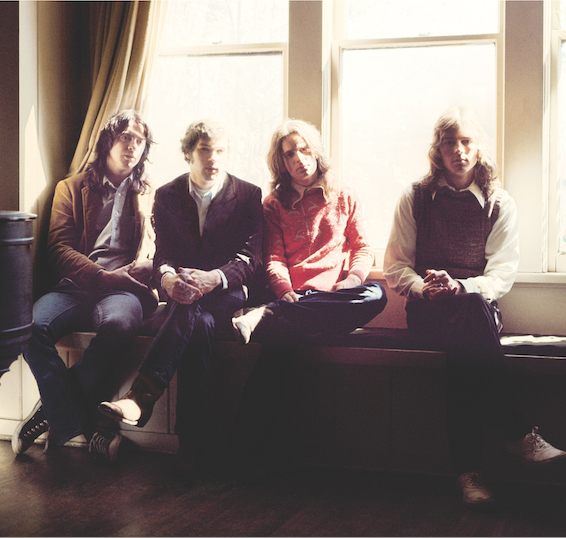 It’s a rare and special thing when a record knocks you out and fills a deep crack in your heart that you didn’t even know existed; with every song that plays, you feel more whole, validated and understood by a group of total strangers, like maybe the way you see the universe isn’t so crazy after all. For me, that album was—and still is—Big Star’s #1 Record, which was released in 1972. It is so sad, so hopeful, and so lovely; it’s the rarest of records, made by people who seemingly understand what it’s like to feel simultaneously broken and optimistic. It’s been almost 15 years since I first heard it, and it still makes me cry. It’s like listening to your own journals sung back to you. It’s, dare I say, literally the best thing ever.

Sometimes treasures sink, and when this record was released, it went nowhere despite much critical acclaim. I recently watched the new documentary Big Star: Nothing Can Hurt Me, which covers the band’s history, including their formation and the creation of #1 Record with founding member Chris Bell, and well as the band’s two post-Bell releases, Radio City and Third/Sister Lovers. It’s a great documentary, in that it shows how weird, cruel, and strangely redeeming the music world can be. I don’t want to give too much away, but for those who don’t know the basic Big Star story, the band becomes a cult success but not a financial one, and the result is both tragic and fascinating. Most of the general public had never heard of them, but artists like R.E.M., the Replacements, the Flaming Lips, Belle and Sebastian, Elliott Smith, Cheap Trick, and Teenage Fanclub kept Big Star on the margins of the radar, paving the way for weird kids like me to find them and fall in love with songs that had seemingly gotten lost somehow years before we were born.

Big Star: Nothing Can Hurt Me showed me how long it actually took for these beautiful works of art to reach a wide audience. There were the lucky few who got their hands on Big Star records and understood their importance right away, but for most of us, they were hidden gems that needed to be unearthed by others, passed along through word of mouth and song-based shout-outs. It wasn’t until the 1980s that the kids who had originally found and loved it were old enough to form bands of their own and mention #1 Record as an important influence, and another decade would go by before Big Star’s three albums were reissued by Rykodisc. It seems like an impossible thing today, when things go viral eight seconds after they’re posted, and if you’re two days late to a song/video/book you’re completely out of the loop. The movie speaks to an idea of success that we don’t seem to focus on as much anymore—the mere fact that these records were created is a triumph in and of itself. The legacy they’ve left is a reminder that immediate recognition isn’t always the best way when it comes to great art; when you’re so far ahead of your time, sometimes it takes the rest of the world years to catch up.

Singer and songwriter Alex Chilton had already found success at the age of 16 with his first band, the Box Tops, who sold 4 million copies of their first single and were nominated for a Grammy Award alongside the Beatles, but he didn’t let that define the rest of his life. Instead he chose to spend the rest of his career challenging people’s assumptions of him by hopping from genre to genre, experimenting with new sounds and styles, refusing to be locked into something safe or expected. His success isn’t necessarily related to money or fame, but in finding a way to be true to yourself in spite of the pressures of the world. (Chris Bell, Chilton’s original songwriting partner in Big Star, met a more tortured fate, dealing with depression and heroin addiction before dying in a car accident at the age of 27 and never getting to witness the lasting influence of his music.)

The Big Star story, like their records, is sad, but there’s more than a touch of beauty there. Any band that can make you think about how you approach your own life, your own art, and your way of communicating with the world deserves to be celebrated, even if it’s 30 years later. The reason we’re still listening to Big Star today is because the music is so good, particularly in capturing the teenage experience, with angst and heartache and that feeling of just figuring out who you are. That comes from Bell and Chilton’s songwriting, which is timeless and true. They are both gone, sadly (Chilton died of a heart attack in 2010), but their work is as relevant and gorgeous as ever.

I often see people in the Rookie comments (and elsewhere) bemoaning the fact that they are X years old and haven’t accomplished the things they want yet, which makes them feel like a failure. I’ve done this myself—setting specific age goals for when X has to be reached or when Y is no longer an option, but I think in doing so we all forget the importance of just creating things for the sake of creating them. It doesn’t matter if nobody reads your story, or visits your blog, or hears your song, as long as you know you’ve made something you love, something that means the world to you. Don’t let the idea of commercial success or mass recognition stop you from making the things your heart needs to make. Even if only one person is moved by your work, you’ve done something important in the world; you’ve put a tiny piece of putty into the crack in someone’s heart and reminded them that they aren’t alone. And that is something that can’t be bought or calculated in record sales. It may take forever for people to understand you or to feel understood themselves, but all you need to do is keep finding your own way, regardless of how much pressure to “succeed” in traditional terms (money, fame, acclaim) society seems to throw out at you.

And if you need a soundtrack to help you through it, #1 Record should do the trick.

We are thrilled to be able to premiere two songs from the documentary Big Star: Nothing Can Hurt Me with you as you discover or rediscover this iconic band.