I made my BFFs characters in my own personal drama and faulted them for not following the script.

Friends Among the Leaves 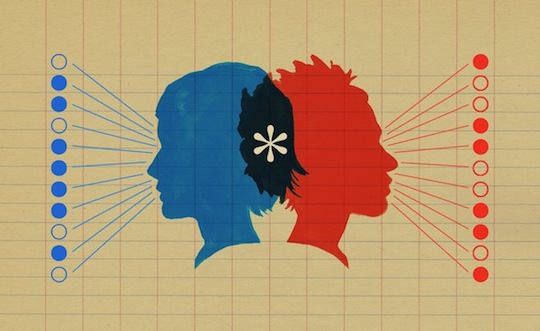 I have known Bianca* since we were toddlers; our mothers met at a playgroup when we were two years old and we’ve been in each other’s lives ever since. We both loved “chemistry,” though our version of it mostly consisted of mixing together Silly Putty, sparkly nail polish, poster paint, and whatever other materials we could get our hands on to see what goopy, sparkly “potions” we could concoct. I loved the idea of having a partner in crime who I could share everything, go on adventures, or just have fun. We were like sisters, and I don’t mean that in a cheesy, “LYLAS!” middle school way. We were comfortable enough with each other that I felt like I could truly be myself around her, without feeling like I needed to impress her. We were close, but we still had our own personalities. Bianca was always more popular, better at sports, and knew how to make friends easier. She knew the right things to say when talking to people, or when to laugh at a joke. I was much more introverted, obsessed with school, and happy to spend my recesses alone, reading books and not talking to anybody. These differences were never a problem. Until middle school.

As we grew up and our interest in science experiments was replaced with an interest in getting invited to parties and fitting in with others, we started to fight. By fifth grade, cliques had started to form—she hung out with the cool girls, the ones that were already wearing makeup and dating, and I was put into the gifted program, where my new friends were a group of girls who still thought boys were gross and liked to spend their free time writing fantasy stories. I thought her new friends were shallow, she thought mine were geeks, and in our unflinching honesty we told each other as much. We gradually stopped trying to force the friendship. We still spent weekends together—she had been in my life for so long that not seeing her regularly was something I never even considered—but we had an unspoken agreement about what was OK to talk about. Movies and Neopets: OK; our non-overlapping friends: not OK, unless we wanted to get into an argument.

In seventh grade, I was accepted into the school I had been dying to attend, a small private school downtown with a focus on academics (it was very Rory-Gilmore-goes-to-Chilton). My family was middle class, but sending a kid to such a fancy school for two years required a lot of saving and scrimping by my parents, and for the first time in my life I became acutely aware class differences. I was an outcast amongst my new classmates, who bragged about how far away they traveled for vacation could tell the difference between a real and fake Louis Vuitton by the age of 12. I continued to spend my weekends with Bianca, and our friendship slowly regained strength as my animosity towards her friends was replaced with an animosity towards the kids I went to school with. Bianca started playing an extracurricular sport called ringette (it’s like women’s ice hockey, but played with rubber rings), and she made it sound like fun, so I joined the team. It was through this team that we met Lisa.

Lisa was team captain, Bianca was assistant captain, and I was the bench warmer. Bianca and Lisa became friends right away. Their friendship made sense; they were the talented ones, the team leaders. I would sit beside them quietly after games as they complained about an unfair call a ref had made or to compliment each other on their wrist shots. Soon Lisa was hanging out with us every weekend, going to the movies or the mall. It was nice to have a mutual friend that met us halfway—she was athletic and popular like Bianca, but she also liked watching artsy movies and exploring vintage stores downtown, the sorts of outings that would just make Bianca roll her eyes. By high school, Bianca had moved to a suburb outside of town, and Lisa and I were hanging out all the time, often just the two of us. Bianca never got jealous or compared herself to Lisa. But she didn’t have to—I started doing it for her. To this day I cringe when I remember how I treated my loyal lifelong friend.

Lisa was fun, but I missed Bianca, the first close friend I had ever had—and the only one until Lisa came along. Soon I started to resent everything about Lisa that was unlike Bianca. Lisa always wanted to go out; she never wanted to stay home, make mac & cheese, and watch silly movies like Bianca and I used to do. Lisa couldn’t automatically tell what I was thinking or feeling the way Bianca always did. With Lisa, we were constantly watching experimental films, but sometimes I was in the mood to watch Mean Girls for the zillionth time, which Bianca was always game to do.

Here’s what surprised me most: After missing her so hard and holding her up as this golden standard of perfect friend-ness, I thought that when I finally got to hang out with Bianca every weekend, I would savor every moment I had with her. But instead, I started comparing her to Lisa and finding Bianca lacking. Why wasn’t she openminded like Lisa? Why did she call the movies I liked “weird”? Instead of seeing Bianca and Lisa as wonderful, complicated, unique individuals that I was lucky to know, I saw each as all the things the other was not. I wanted both of them to be everything at once.

In retrospect, I think that the more Bianca and I grew apart, the more desperate I was to cling to her, or, more precisely, the idea of her as a BFF, and the less I actually valued her as a person. I had started to view my friends in terms of what they could do for me—how much fun I had with them, how comfortable I felt around them, and always on my terms. I relished the idea of the “best friend,” a Sisterhood of the Traveling Pants type of perpetual acceptance and unconditional love. I was such an outcast at my new school—I rarely went to parties, dated, or did any of the things it felt like all the kids in teen movies and on The OC and at my school were doing—that I started to see Bianca and Lisa as trophies, proof that not only did I have friends, but my closest ones were relatively popular girls. I reduced them to characters in my own personal drama, and faulted them for not following the script.

None of Bianca’s outside interests or new friends fit into my script, either, which scared me. I’m sure she was scared, too, of who I was becoming. Right before she and I and Lisa scattered to different colleges, we had one last dinner together. We exchanged hugs, tears, and promises to keep in touch. I never see them anymore.

At my new college, I found myself doing it again. I met dozens of lovely people during my frosh week, but all I could think about was my friends back home. What’s the point of forcing conversation with all these strangers? I thought. None of them are going to be like my real friends back home. None of these new people could ever be as reliable as Bianca, as fun and creative as Lisa. My old friends stood together in my imagination as twin pinnacles of perfect BFF-ship.

It was in the middle of one of these thoughts (No one will evvvver understand me like good ol’ Lisa and Bianca) that it finally hit me. (I know, it took me long enough.) Of course these people wouldn’t be like Lisa and Bianca. They would be like themselves. And who did I think I was, counting essential friend qualities to see who measured up, whom I would deem good enough to be my friend? It’s not like I was overflowing with great qualities—loyalty, devotion, and common sense are three deficiencies I can think of off the top of my head.

To no one’s surprise, once I stopped seeing people as lists of attractive/useful features, it got a lot easier to make friends with them. It was just a few days after my big “stop comparing people to other people” epiphany that I met my current best friend, Caitlin, during an outing at an amusement park; I suggested that we go to the gift shop to look for Bort license plates, and she was the only person in the group who understood the Simpsons reference. For the first time, I resisted the urge to compare someone new with Bianca or Lisa. I got to know her as an actual 3D human being, and gave myself the chance to appreciate her unique strengths, flaws, and interests.

I used to think that BFFs had an obligation to stay exactly that: best friends forever. But now I know that it doesn’t work that way. If you take someone’s friendship for granted the way I did Bianca’s and Lisa’s, they will hopefully move on and find people who value and respect them for who they are. And I thank them for helping me figure out that when you find a friend who truly understands and loves you, you can’t look for what she’s missing, or you’ll miss everything she is. ♦