I Fake It So Real I Am Beyond Fake

I Left My ♥ in Buenos Aires 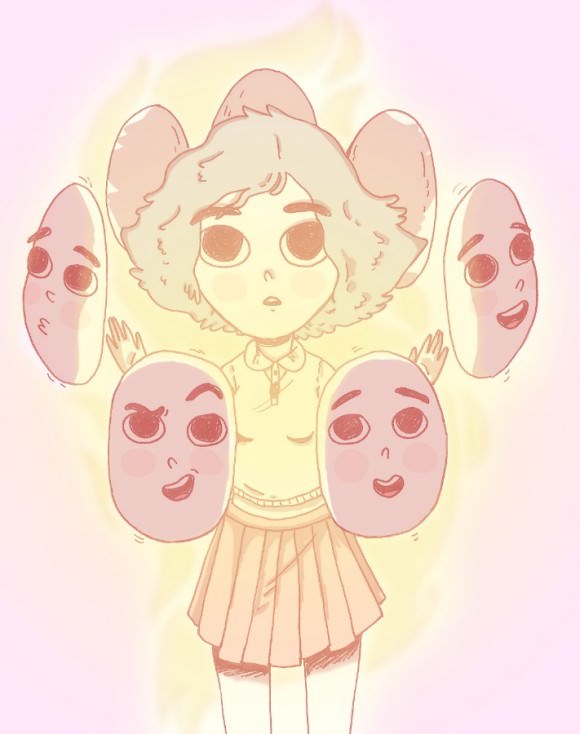 When I was a teenager, I knew only a couple of things for sure: (1) I felt different from everyone else at my school; and (2) I didn’t know what to do about that. I looked around me and saw a sea of people who all blended together, and I felt no hope of ever connecting with any of them. I was desperate to find my tribe—i.e., the people who wouldn’t make fun of me for my tastes, hobbies, and inclinations—but I had no idea how to find them, nor how to make myself findable by them.

I wasn’t some genre-defying special snowflake. I was a mid-‘90s alternative girl, obsessed with music and sketch comedy and horror novels, and just obsessive in general. I thought constantly, about everything. I thought too much about the fragile ecosystem of high school, about other languages, about how cereal is made… This was me in a nutshell, and I was looking for a home—some place where I could quote a Kids in the Hall sketch and get something other than blank stares in return. I had a lovely family and I was a good student, but I wanted people around me who laughed at the same things I did, who agreed that socks could be worn on your arms. I needed validation; and for validation, I needed friends. I decided to send a message—an SOS, really—to anyone out there who might fill that role: Rescue me. The only way I could think to send that message was through clothing.

First step: I took copious notes. I had notebooks full of lists of looks I had admired on other people: prom dresses worn with Doc Martens in Sassy magazine; the Victorian-goth dancers in Madonna’s “Into the Groove” video; the badass-looking kids hanging out at Pablo’s, the local punk club; the drag queens at the gay club down the street from the punk club. I would bring my lists with me to the thrift store or the leather store or J.C. Penney, where I would try to approximate my favorite looks with what I found there. The result was incredibly messy—fishnet shirts worn with furry vests and old men’s pants—but my hope was that together it would all look effortless and cool and indicative of who I was, whoever that was. (I did not. It looked like when you try to put a costume on a cat—oddly uncomfortable and distrustful.)

I’d always made friends pretty easily, but as I felt the chasm between me and the majority of my school’s student body growing, I wanted to close the chasm between me and the subculture-dwelling teens whose ensembles I was clocking in my notebooks. They seemed interesting, and I wanted to seem that way to them, too. I thought of changing my look as the entrance fee to their club, and my new clothes as a white flag I could wave to show those kids that I was “OK.” It seems a little immature now, but I wanted to make it clear that we were on the same wavelength before I even approached them, so we could cut out the chit-chat of “Do you like the Melvins?” and go straight to being friends. Of course I like the Melvins, I’m wearing a Melvins T-shirt. It was a bonus that my new look also reflected how churned up and antsy I felt inside most of the time.

At the time I felt a little guilty that my style didn’t just hatch from my brain, fully formed and wearing scuffed flower-print boots. If it wasn’t a pure expression, untouched by outside forces, of my inner TRUTH, it wasn’t real. Back then I didn’t have style blogs to show me that even the most original dressers happily gather inspiration from the world around them, so I felt like a bit of a fraud. But the bigger thing I felt in my new clothes was confidence—and anything I that didn’t make me feel good about myself, I stopped wearing. Which was my first move away from rote copycattery and toward making choices for myself.

Over time, I made more adjustments to my outfits based on my body, my comfort, and my preferences. It felt good to get rid of the clothes that made me uncomfortable (pleather pants), and even better to watch the clothes that had been my backbone (short skirts, tights, combat boots, belted dresses) coalesce into something that started to look an awful lot like my very own personal style.

So, I figured out my style by imitating a lot of others. And my strategy worked—I found friends who liked the same kinds of things I did by dressing like the kind of person who likes those things (took me a while to realize that meant I was dressing like me, but we’ve covered that). My new friends and I were teased mercilessly by the other kids at school. They called us communists, gay, and devil worshippers, chased us out of school events, and physically harassed us (at least once a week someone would pull my dyed hair, asking if it was “real”). I was hurt and scared by this, but I couldn’t show it. So I tried out my fake-it-till-you-are-it style strategy in a new arena by channeling the toughest person I could think of. While staring at photos of Kim Gordon in the liner notes of Sonic Youth albums in order to bite her style, I had also subconsciously memorized her body language and facials expressions. Kim Gordon looked badass and didn’t care, so why should I? When I felt threatened or scared or shy, I’d hold my head at the same haughty angle as her. That borrowed physical act gave me a jolt of confidence that was all mine.

Years later, after college and grad school and five years of work as a therapist, I started to feel burned out. I wanted to try something new. But what? I knew only a couple of things for sure: (1) I wanted to be a writer and to somehow work in comedy; and (2) I didn’t know what to do about that. So I went back to my old tricks and started borrowing. First, I read a ton of books to find writers I liked. I also started going to more comedy shows. I found people who appeared to be doing jobs I might want and offered to take them out for coffee in exchange for a chance to pick their brains. (This is a fantastic thing to do, by the way, if you need information about a specific field. People love talking about what made them successful, and if you go in with a list of questions, you can get a sense in about an hour if the daily ins and outs of a particular job appeal to you. Plus, you’ll make connections that might be valuable in the future. One caveat: Do NOT ask for a job during this coffee.)

The next step, actually writing, was way more intimidating. I was scared of failing, of not being worthy of the title “writer,” and of being exposed as a fraud. So I pretended to be David Sedaris and wrote something about my family. (Me Talk Pretty One Day is still one of my favorite books—it’s full of small stories made large by Sedaris’s thought process and his love.) When I was writing as myself, I was paralyzed; when I channeled Sedaris, the words just fell out of me—sometimes gracelessly, but the important thing was practicing until I felt confident enough to write in my own voice. My first piece (and probably 20 subsequent pieces) never went anywhere—they were more for me, for practice, than for the outside world. They weren’t very “good” overall, but I started noticing the tiny parts of them that were: the sentences where I was writing the way I talk instead of trying to sound all writer-y, and the random words that I made up to describe things. These were the little baby seeds of what would become my writing style. At my best I wasn’t as detailed as Sedaris; when I tried to be, it sounded forced and unnatural. I kept at it until most of what I wrote felt like those early tiny moments. Then I started pitching my writing to websites. As I typed my pitch emails to editors, I told myself I was already a successful writer.

Meanwhile I was buying coffee for lots of people who book comedy shows, gathering intel. I went their shows and noticed things that worked (offering drinks and snacks to the audience) and what didn’t (crappy sound systems, not enough chairs). When I felt ready, I started a tiny show in New York with my friend Pete. At first we just copied stuff we knew had worked for other people. We made no money during this practice phase. But soon we started solving problems on our own, coming up with solutions we hadn’t seen before.

These days, I make my living running comedy shows and writing, and I didn’t have to go to school for either of them. Most of the time, I feel confident at what I do as myself, but I’m not the least bit ashamed to say that every once in a while I need the training wheels of make-believe again. Especially in situations where I’m a newbie, pretending that I’m someone else invigorates me. It shows me how it would feel to be that competent, and that confident. And here’s a cool thing: Feeling confident is pretty much indistinguishable from being confident. In meetings, I channel my boss Chris, who is the best businessperson I know—he’s to the point and funny and always advocating for himself. I have a comedian pal who is the master of taking her time to find the funny and acting like the audience is lucky to be watching her; any time I have to speak onstage, I adopt her stance and nail it the best I can. I couldn’t possibly run a development meeting, but my agent friend Christie can, so I mimic what I’ve seen her do. Sometimes I get interviewed on people’s podcasts; to get in the right frame of mind I ask myself, What would Kumail do? and then copy that, because my husband is perfect at being witty and engaging in interviews. I have enough confidence now to imbue these impressions with a bit of my own personality, but I have to tell you, it took a while. At first I was a straight-up copycat. I’ve accepted that as an essential part of the learning process for me. I have to adopt other people’s personas, skills, and self-assurance for a while, until I can figure out which part of me can take over the job. Only then do I take off the training wheels and ride ahead on my own. If you were watching, you’d think I was a natural. ♦