Boldly Going Where No Man (or Woman) Had Gone Before

How a bunch of nerd girls saved Star Trek from total obscurity. 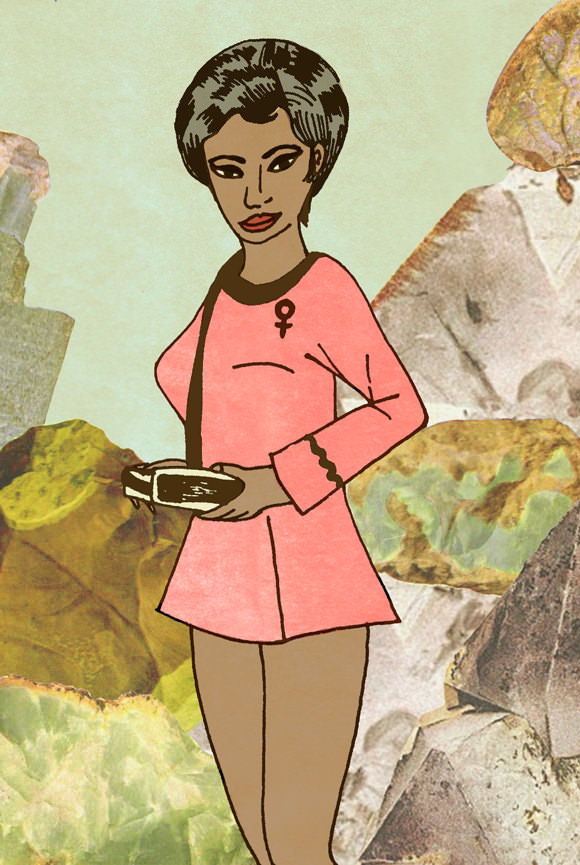 I was 13 years old when I went to my first Star Trek convention. It was a family outing: me, my brother, and both of my parents, all Trekkers to the core. My little brother and I were raised on Star Trek: The Next Generation, which we’d watch with my parents as soon as we were old enough to sit through an hour-long program. I especially liked watching it when it was just my mom and me—it made me feel like I was part of an exclusive ladies’ tradition that the dudes of the family couldn’t possibly understand.

My mother was a lifelong sci-fi/fantasy nerd who instilled those genres’ values in me: an unwavering idealism, an interest in getting to the truth, a love of learning, a sense of fairness and a desire to right wrongs, and most of all a tendency to constantly question humanity and our place in the world. One of the things both of us loved about ST:TNG was that in every installment the crew of the U.S.S. Enterprise encountered a new race of people with their own cultural traditions and languages and clothes—and of course a whole new set of problems needing to be solved in some dangerous manner. (If we were lucky, we’d even get a new complicated romance.) The main characters were explorers, not warmongers or detached anthropologists—their goal was to help people, and to learn about them in the process. And there was something else that I didn’t think about then, but that I must have notice unconsciously: These starships and planets held lots of different kinds of people—of many different races and genders and traditions and cultures—and any of them could be a leader. Anyone could be respected, and could make a difference.

My whole family went to that first convention, with my best friend, Dara, in tow. She was an old pro: Her parents had taken her to her first Star Trek convention when she was five. She dressed appropriately, in a linen shirt of her dad’s with pictures of planets on it. (I wore puka shells and a backwards cap.) I remember the whole day unfolding in two modes: total bliss alternating with abject humiliation. We watched some of our favorite actors answer fans’ questions about their on-screen pets and met a few others; we convinced my parents to shell out a few more bucks than we could justify for handcrafted, glittery dragon/sprite/whatever horns you could tie on like a headband. A woman selling DVDs and pre-signed headshots showed us an adorably minuscule primate (Galago? Marmoset?) she had just adopted, very illegally, as a pet. (It nested, much to my horror, in her voluminous cleavage.) My mom bellowed the Klingon word for “good luck”—“Qapla’!”—to a cluster of passing cosplayers. Dara and I walked away quickly, cringing. Dara laughed—it wasn’t her mom, at least this time—but I suddenly felt weird about everything. Was what I was feeling just you typical parents-are-soooo-embarrassing scenario, or was it something deeper? In that room, surrounded by so many grown-ass people dressed up like it was Halloween and who seemed so hyper-fixated on a TV show, I suddenly realized that my own dear mother was one of them, maybe I was too. I loved Star Trek, and I loved celebrating that love with other people who felt the same way. But suddenly I was hoping no one I knew would see me here.

As I got older, I kept on being a fan, but after that convention I learned to be careful about whom I shared my feelings about The Lord of the Rings, The X-Men, Harry Potter, Veronica Mars, or The Hunger Games. I had designated friends with whom fandom talk seemed safe. They were girls who, like me, read a lot, did theater, and got As because they were terrible at sports. Boys didn’t like us all that much, but we were mostly OK with that. We poked fun at one another for being freaks, but it went unsaid that we actually were kinda freaky.

Over the years, because of maturity, but also because geek culture has become more popular over the past decade or so, I became more comfortable with and open about loving the things that I loved. Still, Star Trek remained, for the longest time, the one thing I never really talked about. After that first (ew, totally weird) convention, I didn’t go to another. I eventually stopped watching the shows—I never got into the last two series, Star Trek: Voyager and Star Trek: Enterprise—and in high school I buried my DVDs deep under stacks of indie-rock CDs and thrift-store clothes and copies of obscure foreign films.

Then in 2009 J.J. Abrams rebooted the series and made it safe for lapsed Trekkers to re-enter the fold. He’d made popular shows like Felicity and Alias and Lost, and admitted before his Star Trek movie came out that he had never watched the franchise in any of its iterations. He wasn’t one of us, he was one of everyone else, and while that made a lot of diehard Trekkers mad, it made it so friends of mine—non-fandom friends—were suddenly interested in the show. After years of hiding my Trekkie past, I was suddenly proud to be able to offer answers to their questions about the canon, and regretful that I wasn’t up on the latest developments.

One night, probably in a fit of term-paper procrastination (I was in college), I started reading up on started reading up on Star Trek’s history. At the end of a long trail of increasingly specialized links, I discovered something I wish I’d known when I was 13 and ashamed of my mother and the lady with the monkey in her boobs and myself: I wouldn’t have even known about Star Trek back then—and no one would know about it now, and J.J. Abrams wouldn’t have made $830 million dollars (so far) on his two Trek movies—if it weren’t for the efforts of a handful of plucky and unashamed nerd girls.