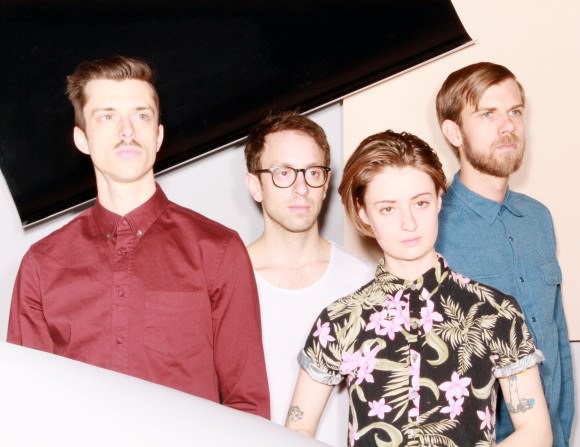 Before she was the enchanting frontwoman of DIANA, Carmen Elle was a teen guitar prodigy and the secret shredder of the Toronto underground. After some false starts and time in other people’s bands (she’s a former guitarist of the electro group Austra, as well as a couple other local acts), she’s finally gotten off the ground—and onto a label, Jagjaguwar, home to acts like Bon Iver and Sharon Van Etten—with the ultra-femme synth-pop of DIANA.

Here, she talks to Rookie about how she got around the anxiety that kept her from touring for years and the challenges that faced her as a pre-teen musician. The DIANA debut is a Rookie staffer fave and the total repeat-player that clears the late night summer haze. We’re pleased to bring you the world-premiere of DIANA’s “Perpetual Surrender,” remixed by master-producer FourTet. It is seven minutes in heaven. For real.

ROOKIE: When did you started playing?

CARMEN ELLE: I started playing guitar seriously at nine. My dad builds guitars, so I was around them a lot and had a real affinity for them. I was always asking to tool around with his guitars.

Did your dad teach you?

In the beginning he taught me. We didn’t have a lot of money growing up, so [my parents] were like, “pick one extracurricular activity and that’s what you get forever.” So I thought, “I will play guitar.” I stuck with that until I was 12. The first three years of practice started to pay off and I started having a lot of fun. It was less [makes confused scrunchy face] and more [makes “Oh yeah” rocking-out face].

Did you write your own songs, or were you mostly playing other people’s stuff?

I started writing at 12 or 13; after that, my teen angst and hormones kicked in, and it was an onslaught of prolific writing until I was 20, and then it stopped—writers block.

What were your songs about?

Feeling alone. In a lot of them I would create these fantastic romances—I wasn’t even allowed to date. These were the proto-Internet, dial-up, no YouTube, no Netflix days.

You were a lonely teen.

With a lot of emotions [laughs]. I was intensely anxious, about as anxious as you can be and still function. I really hated school a lot. I didn’t get along with my parents, I felt intensely angry because I wanted to go see concerts and I wasn’t old enough yet. I didn’t drink and I didn’t want to party; I just wanted to see the music.

Who were you obsessed with?

I tried to see Feist four times between ages 14 and 18; 19 is the legal age in Canada, so I would buy a ticket and try to look as old as I could in lipstick. The bouncer would look at me and be like “How old are you? When is your birthday?” and I never thought to be like “Oh, June 21, 1981.” You know, just have that date ready? But, I would be like “Uh, eighty, uh…”

Did you record yourself? Was recording your main pastime?

It was def the direction of my life. I started gigging at 15. I dropped out of school at 16, and my parents cashed in my college fund [for] a computer with recording software and a mic, and I devoted the next four years to learning how to record myself at home.

How did that happen? Were you just like, “I will be a musician!”?

I just needed some down time! [laughs]. One night, my cousin called and dragged me to an open mic she said she was playing, but what she didn’t tell me is that she had signed me up as well. I played an original song and people in the audience booked me for a gig right away. Once I got on stage, I suddenly had an opportunity to play. Things have kept going steadily since then.

How did start playing with Katie [Stelmanis, of Austra]?

One of my first bands was this riot grrrl band called The WhoreMoans. We opened for Katie’s old band Galaxy, [who were] sort of a Sleater Kinney-esque three-piece. They thought we were the cutest teenager mini-version of them. I talked to Katie and [Austra drummer] Maya [Popstepski] after [the show], and I pretty much just followed them around Toronto for a long time. I was five years younger than them; I would just show up and was a total fan girl. Eventually they contacted me to play bass in Galaxy, a week before it broke up completely, but they liked what I contributed, and asked me to join their new project, which would become Austra, a year later.

Then there was Army Girls and now DIANA.

[Other DIANA members] Kieran [Adams] and Joseph [Shabason, who also plays saxophone in Destroyer] got a grant to record with their old band but it broke up, so they started a new project. They knew of me, and asked me to sing on it, so I went in one day, and the chemistry was good. We had some conversations where I remember telling them this was just a recording band. We are not going to gig, we are not going to tour, this just a project: a nice, Fleetwood Mac-type thing to get crazy in the studio.

But now you were just on tour, and you’re on a record label.

It’s great. I had a lot of stops and starts with projects [before], where I pushed and felt paralyzed by anxiety. I am at a place now where I can tour more, and Kieran and Joseph are great, lovely men.

I remember that you didn’t tour for a long time because you had anxiety about it. How did you get past it?

I didn’t outgrow it. People who say they did are either lying or very, very fortunate. I overcame it very slowly. It took me about 10 years of trial and error, doing small trips, manageable chunks, and worked up to longer tours. And I started meditating; I do it everyday, half hour to an hour, on the road or at home, whenever I find the time. It’s hard to have a routine with rehearsal schedules. And exercise. I started to train before I went on tour, because I would go on tour and come home and crash, be sick and exhausted. I was trying to figure out what it was, and my vocal coach was like, “Uh, you are in terrible shape, that’s what it is.”

What do you do?

I run, I rock climb, do yoga and pilates. I am a super-jock now [laughs].

What about your habits when you are at home?

Having a creative habit is really the best thing, being disciplined enough to do the same thing every day. It gets tough, and that’s why a lot of people don’t do it. But when I’m not writing every day, I get so blocked, cranky and weird, so it’s really important to just do it, all the time.

What do you do to prepare for performing? What and how do you research?

I get so excited to perform, and I never want to fuck it up. I look up who are the singers and performers I think are the greatest—PJ Harvey, David Bowie, Thom Yorke. I spent a lot of time watching videos of them performing a song over the course of their careers if there was any evolution over time, what they do, or never do. Alison Mosshart [of the Kills], too. She has total swag on stage; she moves really slow. I look at how people move. I dance in front of the mirror a lot. There are things you gotta watch out for, like hands. Hands are always bad. What do they do? I see my elbow out there and I am like “Uh, get back in here.”

What do you go for when you’re performing? Do want it to be low-key or do you try to throw that rock star strut in there?

That’s the question, eh? Every time I see a performance I think that is low-key I think “I wanna do that,” and when I see someone who is over-the-top, I think “Oh, I wanna do that!”. I feel like I am clinical in my approach, though. We just played with fun. and Tegan and Sara at this outdoor stadium show, and I had never played like that, so I spent hours on YouTube looking up “Rolling Stones outside stadium,” shit like that. What do I do? What do I say to these people?